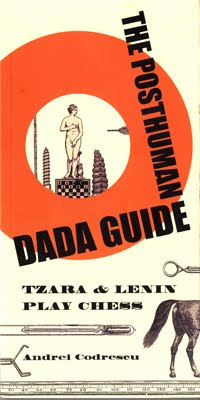 "Andrei Codrescu's The Posthuman Dada Guide is a history, guidebook, and defense of Dadaism, all spun quite creatively together. Codrescu takes a stab at arranging entries alphabetically-encyclopedically, but there are few entries (and these tend to be essayistic-digressive) and the alphabetical order is made to fit his whims, not only with his choice of subject-matter (e.g. 'kibbitzers') but with the arrangement of names - it's 'hugo, ball' but 'michaux, henri', for example.

'It is not advisable, nor was it ever, to lead a Dada life', Codrescu acknowledges right from the outset, but especially in this 'posthuman' age -- politically and technologically:

you will need Dada as a corrective to what will certainly be the loss of the modicum of liberty you still possess.

Much of the appeal Codrescu finds in Dada is in its resilience and refusal to take itself (or anything) seriously, and he notes that while other fads and movements - from communism to all sorts of art movements - come and go, Dada remains as fresh as ever:

There are, of course, many histories of Dada and, as noted, many dada revivals, but nobody can figure out why Dada won't rust. What's more, what's still live in some of the movements inspired by Dada, whether surrealism, happenings, Fluxus, abstract, or Pop, owe Dada that still-ticking je ne sais quoi and je ne regrette rien. The paradox, of course, is that those movements die to the extent that they become acceptable, while Dada stays both alive and unacceptable. Dada has no style, no taste, and no taste for taste, and, after its meager possessions have been divvied up by museums and collectors, all that is left is what Dada means. (Which is rien, nothing.)

Codrescu chronicles much of Dada's history, and profiles many of the main players, and is particularly intrigued by the idea of Tristan Tzara and Vladimir Lenin facing off at chess in a Zurich café (as they possibly actually did), two representatives of radically different ideologies that had tremendous influence over the course of the twentieth century. The irony that: 'These two people do not agree to society's rules, yet they obey the laws of chess' is just one of the oddities of this clash, which Codrescu milks for all it's worth (fairly cleverly).

There are personal touches and digressions, too. Romanian-born Codrescu makes quite a lot out of the fact that so many of Dadaists were Jews from the Pale region, and he goes into their history, as well as that of Romania. Beyond that he discusses his own classroom experiences as he imparts Dada to his students, and even quotes himself, referring to previous texts he has published. Other lengthy digressions involve such things as the Internet -- or rather: internets, in old and new variations.

Noting that so many of those involved with Dada assumed pseudonyms and new names, one of the clever ideas Codrescu offers is:

For the purposes of this Guide, I suggest that you read it as someone else. Yes, reader, take a reading pseudonym: you will be astonished how interesting it will become, without the intellectual baggage of whatever-your-name-is-now.

A roller-coaster ride of essay(s) and grab-bag of ideas, history, and recollections, The Posthuman Dada Guide is an appropriately loose and shifting piece. It is informative and entertaining, though Codrescu himself is a bit too prominent a figure in the story. But it is good fun (and comes in an appealing and handy pocket-sized format).» - M.A.Orthofer

«Ever want to run naked across a convention floor, pie-hit a bishop, or show up at a job interview in a firecracker hat, screaming poetry until security guards haul you away? Andrei Codrescu's The Posthuman Dada Guide may not be the literal how-to that the title implies, but it will definitely give you the historical and philosophical basis you need to justify a stunt to your cell mates while the authorities figure out what to do with you... Fascinating and indispensible.» - John-Ivan Palmer

«Dada: An absurdist art movement declaring itself against rationality, tradition, and—above all—Dada. Catholic mystic Hugo Ball and poet/impresario Tristan Tzara launched it in Zurich as World War I blazed all around.

Posthuman: A sci-fi term that came of age in the mid-1980s through texts like Donna Haraway's Cyborg Manifesto. It's what we homo sapiens supposedly become when technological enhancements allow us to transcend our biology.

The Posthuman Dada Guide: A hard-edged, rapier-like volume, perfect for sliding into a back pocket of skinny hipster pants or stabbing into the complacent underbelly of bourgeois (or bourgeois-bohemian) society. Authored by NPR commentator and essayist Andrei Codrescu, it offers a headier-than-usual tour of the early-1900s avant-garde, sprinkled with sex appeal for the would-be MySpace-age revolutionary. Jacket blurbs from the likes of Josephine Baker and Aleister Crowley affirm the Guide's period credentials. Meanwhile, the whole thing is a kind of hypertext, composed of cross-referenced 'database' entries—so you can't doubt its cyberpunk legitimacy.

The Guide's Web-savvy structure isn't just a gimmick: It aids in the seamless formation of Codrescu's manic associative trains, which reach to the Middle Ages and back, tracing elements from surrealism to gothic vampire cults, Communist revolutions to Christian carnivals, artists' love for Peggy Guggenheim to differences between American and European witch hunts. This book might've vied with Greil Marcus's Lipstick Traces for the subtitle A Secret History of the Twentieth Century.

As art theory, the Guide could even be preferable to a college seminar on modernism: I'd take its page-long analysis of why poor people make modernist artwork and rich people buy it over Clement Greenberg's classic essay Avant-Garde and Kitsch any day. Codrescu takes potshots at academics' sacred cows, such as the pessimistic notion that 'Dadaism' is obsolete, a corpse to be dissected. He insists it's been alive and well, and he wants to keep it that way.

He also places Dada on a broader historical stage than it usually receives, mingling it with world politics. Hence the book's main framing device: a hypothetical chess game played by Tristan Tzara, the soul of Dada, and Lenin, who apparently gets to represent the Posthuman. It's a tantalizing conceit. In 1916, Lenin plotted revolution just down the road in Zurich from where Tzara (a future fair-weather Stalinist) was helping invent Dada performance at the Cabaret Voltaire. The two men never met, but think if they had! Here, their imagined rivalry dramatizes the struggle Codrescu views as central to the last 100-odd years of Western civilization — between 'mindless, repetitious' mechanization on the one hand and 'drunken,' 'anarchic' spontaneity on the other.

Of course, Tzara and Lenin were both fighting against the tyranny of traditional elites. Yes, Lenin liked mechanization and believed in rationality. The Dadaists' contempt for both of these things, on the other hand, was largely directed at the bourgeois-capitalist war machine; they were hardly anti-socialist. Meanwhile, the Italian Futurist avant-garde — Dada's major contemporary, which barely gets a paragraph from Codrescu — idolized the war machines while still hating rationality, the bourgeoisie, and the Leftists. In other words, Codrescu's categories don't always divide up as neatly as he suggests. In fact, sleight of hand may be involved in some of his key arguments. Nevertheless, he's such an entertaining conjurer that you often just want to let him get away with it.» - Eli Epstein-Deutsch