Steven Shaviro - When you open your mouth-or your ass, or your cunt-there's no way of knowing what `foreign particles' will enter 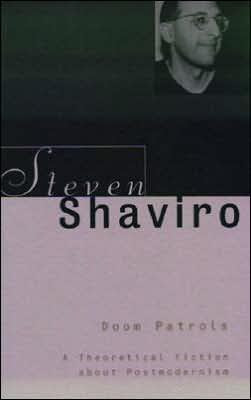 "Doom Patrols is a rollercoaster ride through late-20th-century culture. Considering topics as diverse as Elvis worship, the erotics of cyberspace, fantasies of the millennium, multiple personality syndrome, and the molecular logic of insect DNA; ranging from William Burroughs to Dean Martin, from Michel Foucault to My Bloody Valentine, from Andy Warhol to Bill Gates, the essays in the collection take an idiosyncratic look at the forces and counter-forces currently transforming American and world culture."

"In Doom Patrols, Shaviro is out to prove that he is not just a nerdy literature-and-film professor, he is also a member of the hip-oisie who (gasp!) goes to rock concerts, reads comics and uses the word fuck. Through 17 loosely defined personal essays on subjects ranging from Bill Gates to Truddi Chase (of 92-personalities fame), Shaviro expounds on postmodernism. He applies the idea that essence is obsolete to examples from American culture (many already overanalyzed) including Kathy Acker and Cindy Sherman. Shaver's style is at times self-consciously smart ("This ability to deceive ourselves and to be sincere... is the defining characteristic of what it means to be American, or to be human") at other times embarrassingly confessional ("I needed your wound, but since that night you've withheld it from me"), always deliberately quotable ("war is menstruation envy"). Oddly, race has virtually no significance in his version of the postmodern universe. While Shaviro draws some interesting connections between the theory of natural selection and postmodernism, his book is still a party gathering the same tired, talked-out guests: Warhol, Burroughs, Baudrillard, Deleuze, Felix Guattari, Foucault. One gets the sense that Shaviro is trying way too hard to impress a readership of the converted-people who are easily wowed by ponderous statements such as: "When you open your mouth-or your ass, or your cunt-there's no way of knowing what `foreign particles' will enter." That may be true, but some of us have a pretty good idea." - Publishers Weekly

"Like those strange, fearsome fish that live in the ocean's deepest depths, Shaviro's prose and his ideas may thrive in their own confined milieu, but brought to the surface world where the rest of us live, they explode and die. Shaviro tries to conceal the basic unoriginality of his thought behind a dense patter of quotation, citation, and jargon. And so we are treated to the recycled thoughts of such postmodern sages as Baudrillard and Deleuze, as well as the usual, trite reflections on rock 'n' roll (it induces disorientation, the quintessential postmodern experience) and Disney World (where excess blurs the boundary between reality and unreality and the postmodern world's fetish of the object is fully realized). Shaviro also spends an inordinate amount of time analyzing the comic book series Doom Patrol, whose main virtue, apparently, is its deliberate engagement with postmodern themes. But the subject matter is really unimportant. With tautological criticism like this, subjects exist only to confirm a theory. Hence, postmodern critics adore such fabulistic novelists as Pynchon but almost never acknowledge the existence of such doughty realists as Mailer or Bellow. Shaviro jettisons such concepts as theme and coherence, rambling wherever whims and his borrowings take him, perhaps trying to demonstrate tautologically the confusions of a postmodern universe. In short, these essays aren't really about anything at all." - Kirkus Reviews

"This book is a theoretical fiction about postmodernism. Fiction because Shaviro exercises the novelist’s conceit of character and event in carving his preternatural discursions; Doom Patrols is not a declaration of narrative. Postmodern because: "Postmodernism is not a theoretical option or a stylistic choice; it is the very air we breathe."
Steven Shaviro’s gathering of dense, sometimes obtuse, occasionally electrifying essays should never have been published on paper. There is something awry (modernist; pre-modern even) about turning pages, submitting to the tyranny of left-to-right. We need a cerebral plug-in, intravenous disclosure; CD-ROM allows for Burroughsian cut-up (William Seward gets a chapter heading); or to at the very least restrict availability solely to the Internet. But chips like that are restricted to Jack Straw’s wet-dreams, and CD-ROM is never as good as (read Brian Eno - not a chapter heading, surprisingly). And besides, Serpent’s Tail have published it as a book, albeit after months of being available on Shaviro’s own web site.
Postmodernism: Let’s Go!
"To a postmodern sensibility, there’s no contradiction between cool and hot, irony and passion, playfulness and commitment, excitement and disgust, pleasure and anxiety, or camp distancing and involvement to the point of obsession." (from Chapter 1: Grant Morrison.)
"Sincerity is a postmodern malady." (from Chapter 2: Walt Disney.)
In his cover-shot, Shaviro - a teacher in literature and film - faces away but wrests his gaze for a brief glimpse of us. He recognises what he has written: Doom Patrols is a treatise that defies this very review. If there is no difference between cool or hot, camp and obsession, then how are we to accuse anything here of simple right or wrong, stupidity or perception to an nth degree? A mass of his dialogue is most likely bollocks; certainly much is almost impenetrable, compacted thought; mind-fucking inadequacy. And yet... and yet:
"It’s Bill Gates’s world; we just live in it... God, like Gates, has exactly the aggressiveness, the competitive drive, and the sense of entitlement you’d expect in a talented straight boy from a privileged WASP background."
If he builds it, we will come. Shaviro is good at that, lighthousing this ocean of punctuation, a beacon to pilot us through. And to the end is where we go, for no matter how annoying Doom Patrols gets ("detached from referential meaning; the mechanical piling up of fragments takes the place of organic completion or symbolic translation"), it remains compulsively readable. We have to find out who did it.
For every irritation (Chapter 7: Cindy Sherman, "all feminine coquetry and affectation"), there is real juice like the dissection of Twin Peaks in terms of child abuse (Chapter 14: Truddi Chase). Or the last and quite brilliant chapter on the enigma that was Dean Martin ("If Elvis ... is the triumphant product of processes of natural selection, then Dino is the anomalous, ephemeral, and sterile expression of an illicit counter-movement"). Tremendous stuff.
In the end the greatest trick Doom Patrols (the author’s world dissected in relation to the comic, not the celebrated POV-game) pulls is the very sobriquet postmodern itself; it is auto-reviewed. All Shaviro leaves with us are his own quotes. Pop will eat itself. We surrender." - Gerald Houghton