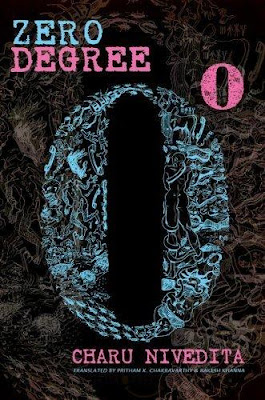 
«Charu Nivedita's Zero Degree is difficult in the most interesting way: it appears to be teasing, confusing, pretending, mimicking, and sometimes even misleading, till you see the audacious design that makes this book one of the most interesting deliberations on the business of writing. The writer leaves clues hinting that this story is about literature and how the author relates to material: “There’s been a mistake. The chapters have become shuffled. I might have had some ulterior motive. Perhaps my hatred for Muniyandi and my love for Misra are responsible; perhaps I’ve subconsciously moved Misra ahead and shoved Muniyandi to the background”; “To understand my writing, forget my life. My life is separate and my writing is separate”; “Is this really a novel, or merely a bunch of notes thrown together into a book?”

The writing in Zero Degree appears to be asserting that even in a post-structuralist world, where aesthetic and formal parameters are elastic, style, form and content can still be shocking. Its subject matter is not unfamiliar, neither are its many styles or its use of language, but when it comes together, the reader is both surprised and shocked. Zero Degree insists on the importance of style even where it is an admission of dishonourable intentions.

Zero Degree’s “mad patchwork” takes the reader on a wildly curving, frequently detouring story made of phone sex, torture, love poetry, numerology, mythology, and what appears to be a decidedly Latin American thoughtscape, and interestingly, in this journey, the reader is both guided traveler and adventurer.

The book is a virtuoso performance by a writer doing voices he loves and hates, including Latin American, Sangam Tamil, meta-textual, magazinese, establishment Tamil, etc. While he dons these many hats, in a postmodernist gesture he also lets us know that he is enchanted and not ‘influenced’ by any of them, by ostentatiously annotating each hat-wearing moment.

The author’s audacity — about content, form and language — is totally charming; the fact that in ‘real’ life, he appears to be as unpredictable, as difficult to locate in a hierarchy of Tamil writers, and is bathed in a glow of speculation, controversy and love-hate makes it all the more intriguing.

Zero Degree is, without doubt, an unusual experience in reading; unlike most books, it challenges — and inspires — the reader to create a structure from the apparent mayhem of form and content. Or, in the author’s words, “Please, go ahead and search for meaning in the host of words scattered in these pages.” – Kala Krishnan Ramesh

«This book can be compared to a scream. A good, full-throated one for which you would ordinarily need the falling cliffs. And to say that Zero Degree cannot be brought home would be, ironically, a compliment to the author Charu Nivedita and its translators.

Charu writes about politics within the family, more accurately sexual politics within the family. Since he has done a good job of revealing the uncertainty and violence within families and contemporary personal relationships, it would indeed be a bad idea to bring it home. But for all those feel stifled within a family and a meaningless routine, please read it on your way to work.

Hide it in the deep recesses of your clothes cupboard or in the general chaos of your office desk, if you will, but read it. You should read it for the thoughts that ordinarily get edited out or words that get buried in symbols.

Zero Degree falls within the genre of trangressive fiction, in which authors try to break out of their societal confines by discussing taboo subjects. Anne Soukhanov, in The Atlantic Monthly (1996) described it as “A literary genre that graphically explores such topics as incest and other aberrant sexual practices, mutilation, the sprouting of sexual organs in various places on the human body, urban violence and violence against women, drug use, and highly dysfunctional family relationships, and that is based on the premise that knowledge is to be found at the edge of experience and that the body is the site for gaining knowledge.” Other popular authors in this genre could be Chuck Palanhiuk and Charles Bukowski.

Charu’s book, written originally in Tamil a decade ago, follows no linear narrative and the protagonist of the book is the insanity that confronts you every day. The narrative is so chaotic that it is a relief. And occasionally there is humour.

The first chapter is one of my favourites for its keen observations, pathos and good-humoured acceptance. In it the author addresses his readers, both ‘normal’ and ‘deviant’. There are chapters that layer personal battles with larger political ones; the sudden change in perspective can give you vertigo. There is a chapter that is a questionnaire, which includes subversive questions that ridicule the author, critics and readers, and then it asks you questions that serve no logical purpose.

There are letters and phone conversations and pages that imitate palm-leaf manuscripts. There are chapters and sentences the author refuses to complete. There is a poem on the primordial and powerful Shakthi who was forced to give away her powers to three men. After using her powers of creation, protection and destruction, they return tired and ask her… Well, I shall leave the sentence hanging too.

Occasionally the author drops names of Latin American writers and high-brow philosophers. Perhaps it is to assure the reader that he is not being taken for a ride. That the well-read, literate author is taking the reader on a well-planned tour. Zero Degree takes you apart and allows you to rearrange yourself as you please. -ashasmenon

«Charu Nivedita grew up in rural Tamil Nadu and spent twelve years working in Delhi before moving to Chennai. He has published four novels, two short story collections, and several collections of essays in Tamil. Since 2003, he has been writing regular columns for various Malayalam-language journals on politics, contemporary Arabic literature, and world music.»