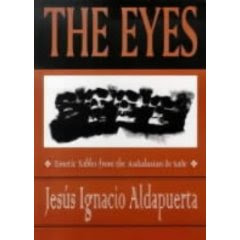 «Anyone who reads these pages will already be aware of my interest in literary extremists, rebels without hope and wayward lunatics. Jesus Ignacio Aldapuerta scores on all three counts judging by The Eyes, a selection of 'emetic fables from the Andalusian de Sade'. This slim collection of stories is disturbing in extremis. The comparisons with de Sade are apt only in terms of the tortured vision and the horrors which Aldapuerta describes. In many respects his writing is reminiscent of JG Ballard, and he writes with a spare, detached style that does nothing to detract from the often distasteful imagery and violent acts that he describes. This is not an easy book to read, but then who wants things easy?» - www.blackstarreview.com/rev-0004.html

«I had bought this a year or two ago, and reading the first few stories I was far from impressed and set it aside without finishing it. In taking a break from Bataille yesterday I was struck with an urge to revisit this, and I'm certainly glad I did. This time around the stories struck a chord with me; potentially because reading these stories as beyond simple evil & shock, it's possible to find something really incredible. In tangent with readings of Bataille, Aldapuerta (who's life, I have to admit, has me wanting much much more of his work [coded diaries?!:]) seems to exhibit an uncanny ability to write representations of the impossible or if not that, at least the extreme limits of experience. That is what saves this work from being tossed along side a lot of other "transgressive" literature that I've suffered through looking for cheap thrills: the fact that this is literature as transcendence.
There is absolutely no concern present for the reader in this work, and Aldapuerta doesn't care if you know that. There is alternatively a level of solipsism present in the fantasy element running next to a level of beautiful textuality, occasionally a meta-textuality, and if anything a textuality seeped in semiotics & post-structuralism (the final short story; "Pornoglossa" demonstrates this wonderfully).
A few motifs that pop up repeatedly throughout the stories struck me as particularly fascinating: two of the strongest stories, "Orphea" and "Upright" contain instance of a hyper-present static. In "Orphea" it is a "soundtrack" taken from field recordings that the protagonist listens to while driving the desert (and the descriptions here found me wandering back to the Ligotti story "The Bungalow House," though there are enough differences that I can't pinpoint exactly why), and in "Upright" it is the catalyst for an incident of pederastic sexual violence. In both stories the static forms a sort of texture, an atmosphere that coheres with the story in a really uncanny sort of way: the idea of static became uncomfortable to me.
Aldapuerta is definitely evil & insane, but he's also a brilliant fucking writer, and I sincerely hope that more of his work makes it's way to the English language.» - http://murdermystery.livejournal.com/tag/reading+log