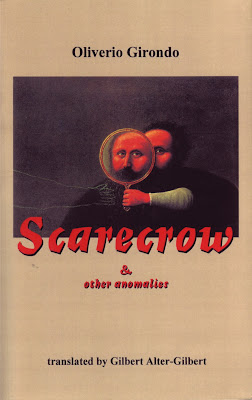 
"May noises bore into your teeth like a dentist's drill, and may memory fill you with rust, broken words and the stench of decay.

May a spider's foot sprout from each of your pores, may you find nourishment only in packs of worn cards and may sleep reduce you, like a steam roller, to the thickness of a photograph.

When you step into the street, may even the lampposts dog your heels, may an irresistible fanaticism oblige you to prostrate yourself before every garbage pail and may all the inhabitants of the city mistake you for a urinal.

When you want to say "My love," may you say "fried fish"; may your own hands try to strangle you at every turn, and every time you go to flick away a cigarette, may it be you who is hurled into the spittoon.

May your wife deceive you even with the mailboxes; when she snuggles next to you, may she metamorphose into a blood-sucking leech and, after giving birth to a crow, may she bring forth a monkey wrench.

May your family amuse itself deforming your bone structure, so that mirrors, looking at you, commit suicide out of sheer repugnance; may your only entertainment consist of installing yourself in the waiting rooms of dentists, disguised as a crocodile, and may you fall so passionately in love with a toolbox that you can't desist, even for an instant, from licking its clasp."


This piece is from Scarecrow itself, chapter 21 of 24. Scarecrow was first published as Espantapajaros (Al alcance de todos) in Buenos Aires in 1932. In his Anti-Preface, Karl August Kvitko (Gary Kern?) quotes a letter Alter-Gilbert sent him during the translation process:

There is a preponderance of sexual innuendo in Scarecrow, and Girondo has a wicked penchant (Joycean in method) for cramming a phrase with multiple meanings, so that a line such as Solidario del naufragio de las señoras ballenatos, de los tiburones vestidos de frac, que les devoran el vientre y la cartera has a double set of associations: (1) "I am in solidarity with the shipwreck of whale-calf señoras and with the sharks in tuxedos who devour their bowels and their flippers" or (2) "I am in solidarity with the broken romances of married whale-shaped women and with the lotharios in their coats and tails who consume them, both their wombs and their purses." There is the plight of whales in nature and of betrayed women in society united by a creative use of Argentine slang. There is further the strong suggestion that the abandoned women are pregnant, a suggestion reinforced by a line in the next paragraph referring to rats and abortions circulating through the subsoil. This is one example among many that could be cited.

The book is a "Xenos dual-language edition," so you can follow along with Alter-Gilbert to see how he grappled with these translation issues." - Will (A Journey Round my Skull)


"As the scion of a family of Argentine beef barons, Girondo had the means and the leisure to put himself at the service of public cultural enrichment, which he did, generously and unstintingly, throughout his life. Money from the family cattle empire afforded him, like other wealthy Latin literati such as the Chilean Vicente Huidobro, to engage, along with his wife the poet Norah Lange, in extravagant enterprises of personal indulgence such as champagne-and-cocaine-laced voyages beneath the stars on the decks of glamorous transatlantic ocean liners plying the distances between Buenos Aires and Cherbourg and to bring back from Europe the latest intellectual trends and aesthetic ideas. Because his literary output was slight, some have accused him of indolence of mythic proportions, but such an assessment is probably unjustly harsh, because Girondo's mental formation was such that he sought a chimerical and impossibly elusive aesthetic absolute. He wasn't interested in pursuing existing writing styles, no matter how avant-garde or experimental. In fact he was so perfectly and intrinsically an avant-gardist, spiritually speaking, that he was determined to attain absolute originality and absolute purity, or to create nothing. The most significant aspect of his trajectory as a literary artist was his quest after linguistic essences. In this he shared the concerns of poets such as Francis Ponge, Roberto Juarroz, Peter Handke, and Vicente Huidobro. In between hosting salons and soirees for the Argentine cultural set and boosting the careers of countless younger literary aspirants, Girondo spent a lifetime cloistered in his study, amidst looming wall-to-wall ledges of recondite and recherché tomes, searching out the polyperspectival meanings and music, oblique verities and poetic valences resident in the spaces in and around the semiotic prisms of words and their linkages. Like the alchemists of old, Girondo seemed convinced that if he could milk a single word for all it was worth, if he could bleed it dry, exhaust it, drain it completely, he would arrive at a result akin to the splitting of an atom, or the conversion of base metal into gold. He was also convinced, years before Harold Pinter came on the scene that, in any syntax, there is as much meat in lapses and lacunae, as in words themselves. He was gravely injured in a car accident, from which he suffered horribly the last few years of his life. When he was informed that the house of his birth was to be demolished and paved over with a new boulevard, he joked, with characteristic black wit, that he had been killed in the same place he'd been born: in the middle of the street…" - Gilbert Alter-Gilbert

"Born of a wealthy family in Buenos Aires in 1891, Oliverio Girondo spent his early years in Argentina and Europe, traveling to the Universal Exhibition in Paris in 1900, when he was only nine, and where he later claimed to have seen Oscar Wilde stalking the streets with sunflower in hand. After spending some time at the Lycée Louis le Grand in Paris and Epsom School in England, he made an agreement with his family to attend law school in Buenos Aires if they would send him each year to Europe for the holidays. For the next several years, Girondo explored the continent, even traveling to find the source of the Nile.
Meanwhile, back at home he had begun writing avant-garde plays, which caused a stir in the theater world of Argentina. In 1922 he published, in France, his first volume and verse, 20 Poems to Be Read in a Trolley Car, which shows the influence of Guillaume Apollinaire and the Parisian scene. Only in 1925, with the second printing of this book, did Girondo receive attention in Argentina. By this time, the ultraists, lead by Jorge Luis Borges, had become a major force the scene, and Girondo continued his own humorous exploration of the aesthetic in his second volume, Decals. In the same period he became involved with the avant-garde journal Martin Fierro, which brought together younger poets such as Girondo and Borges with more established figures such as Ricardo Güiraldes and Macedonion Fernández.
After a five year period of traveling again, Girondo returned to Buenos Aires, publishing two of his major works, Scarecrow (1932) and Intermoonlude (1937). A new book, Our Countryside, appeared in 1946, the same year he married the poet Nora Lange. In this new work he moved away from the ultraist ideas, playing with elaborate metaphoric language. As Borges moved toward his more fantasist works, and a new generation of poets arose, Girondo was increasingly described as a humorous or even frivolous poet, but his 1956 work, Moremarrow stood as a darker summation of his career, a work that bears comparison with the great Chilean writer Vicente Huidobro's Altazor. Many readers, however, feel that Girondo went further in his linguistic explorations. During that same period Girondo revived the journal Contemporánea.
In 1964 Girondo was hit by a car, and for the several years suffered terrible pain before dying of those injuries in 1967. His last works were gathered by the surrealist poet Enrique Molina."
Labels: Gilbert Alter-Gilbert Oliverio Girondo Will (A Journey Round my Skull)