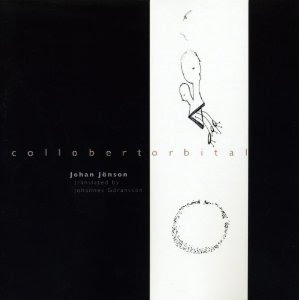 «If Vicente Huidobro met Georges Bataille on a Waste Management(R)truck, the result might be something akin to Johan Jonson's COLLOBERT ORBITAL, the new manifesto of "the waste-disposal-working-class." At times soaring across "aerospatiality," at others existentially grounded in "an overheated world factory" of "all work, all healthcare, all logistics," Jonson's linguistic propulsions and dynamic formal innovations challenge "a victorious bourgeois poetry order" to, once again, rearticulate verse experimentation to the politics and poetics of working a day job." - Mark Novak

«COLLOBERT ORBITAL sounds like an operation performed on the retina of a late night comedy show host. It is not. What is it? To speak an ecstatic technology. It is labor and language. Work and wonder. I would like to connect your tongue to a garbage disposal and then ask you to moan a song called Global Capitalist System Dynamic bribes. The fucking ocean is bleeding black tears right now. People say experimental, here it is. Packed up tight. This poetic arterial order. Bleeding, too, as it spins. worldfactory. It is an isotope slam of French writer Danielle Collobert’s journals. Wait now. Johan Jonson flicks the switch.
Original Gravity: 1.059 Final Gravity: 1.013 International Bittering Units: 30 Color (SRM). Carry the one, etc. About a 3 inch head with great sustainability. The coating was itself river flotsam and endured. I drank all 6, quickly. The buzz was not dissimilar to running four miles and then downing a cruet of heavy syrup. Glow.
Jonson as member of Teatermaskinen. Some remember his performance, Project FAUST-FUCK. His poems reminded me of eating glass, shitting out the glass, reconstructing the glass into a mirror or a frame to frame ourselves doing the fake smile. Asked to. What does all that mean? This.
That the scalpel-sharp

things and orders.
Deep in the darkest depths of Rock Lake prowls a great saurian known today as Rocky. The legend of Rocky is old. The ancient inhabitants of Aztalan warned of the beast by building a giant serpent mound at the lake’s edge. The early residents of Lake Mills were forewarned of a guardian placed in the lake to protect its sacred stone tepees. And history tells of numerous encounters with Rocky, who became a source of great worry and fear. Although not seen for over a century, divers still experience a feeling of dread and being watched. Enjoy Rocky’s Revenge, our offering to this legendary protector of Tyranena. Right. Ok. It tasted malty. Ever had Russian black bread? It tasted like Russian black bread someone had shoved beneath the radiator of a studio apartment in Grand, Rapids, Michigan, one of those pipe heater things that groan and ping all night. Toasted black bread. Malty. There was a slight toffee finish, like that hard grandmother candy. Also a finishing note of whiskey. Why? It was aged in whiskey barrels, dumb-ass. I liked it.
Yes. Something is taking place. Yes, it is enormous and white wall, strong institutional lighting. You stand there, in front, on the surface. A speech therapist instructs you. You cannot speak. The words produce an unendurable aftertaste. The word combinations produce an unendurable aftertaste. You write write think write for no reason. It is disgusting to hear that which is said to be YOUR voice. What do you remember? You remember a creature without name who stuttered in a foreign language. The speech therapist is a whispering choir machine, a movement, a kinetic, a gray and white. Nothing worth seeing. That which is visible is always already lost territory, lost time.
A good beer makes the mouth feel tingly. My mouth felt tingly with all 6 beer. I could bounce quoted poems off my ideas of, but to pick is like selecting a drop of water from the river–I’d like you to experience the river whole, in all its…Here is 67. I mean come on. Read 67 and then go read the book entire. Flow.
Simultaneously ongoing labor:

the unconscious concretized in multiple bombings

the energy extraction from the event the

only not dead which you miss

only not torture which you want

you only absolute time without space

the impulse flow never stopped by human will

your bodily blood no longer testifies about you

illiteracy for no minds

the room a neverending field

the key an open repetition

self-mutilating-freedom
Light carbonation. I already discussed light carbonation. You want steak not sizzle. You want flavor not fluff. You want light carbonation. God invented beer.
The Swedish Arts Council invented the money for COLLOBERT ORBITAL. Johannes Goransson invented the English words to put into the words (thanks for doing that). Frank Place invented a pregnancy test that will always come out positive. Steven Hendricks invented the scaffolding world of this book. A. Hormel & Co. developed the world’s first canned ham in 1926. Meghan McNealy invented the colors. Eric Gill (who was a sculptor, designer, devout Catholic, and person who experimented sexually with his own dog) invented the font used here called Gill Sans. Temple Grandin invented a friendly way to slaughter cattle. Antoine Louis invented the Guillotine (not Guillotine himself). Johan Jonson says:
Buzzerless blisscharge.


«Johan’s text is in many ways a "re-translation" of Norma Cole's translation of Collobert's diaries (Litmus Press), translating it into his own severely restricted language, and also his life (he used to work as a feces-remover at a hospital).
Johan is an interesting poet. A working class guy who was early on heralded as a bright young promise in the late 80s; then his work grew increasingly obscene and constrained (an odd combination); and in the 90s he was more or less exiled from the poetry world. Instead he wrote performance pieces for an incredibly obscene Artaud/Muller-inspired performance troop in northern Sweden (Teatermaskinen), publishing his texts as pamphlets that were eventually gathered up as I krigsmaskinen (In the war machine, they dealt largely with the war in Yugoslavia).
At this point he was in many ways “rediscovered” by Aase Berg, a young poet who had gone from being a member of the radical avant-garde group the Stockholm Surrealists Group to an incredibly popular and influential young poet. The big press Bonnier very briefly let her edit its flagship journal BLM, and she used it in part to bring Johan into prominence. I’ve translated her work too, so I included one of those books. She also has an interesting tie-in for American poetry: as you can perhaps tell, there’s a big shift in her work from the extreme Bataille-influenced early surrealist prose poems to the highly charged, extremely translation-infused poems that follow (particularly Transfer Fat, which is based largely on “translations” of string theory, sci-fi films and other materials, a text that seems to “transfer” the “fat” of signifiers/signified in a continuous movement). Anyway, a big part of that shift had to do with Berg’s interest in American poetry, particularly Susan Howe, who was then just being translated into Swedish.
Since then, Johan has become one of the central poet of OEI, a journal and publishing house founded by Jesper Olsson, a Swedish scholar who spent years in the 1990s studying with Charles Bernstein at SUNY Buffalo and who was inspired by Charles’s emphasis on do-it-yourself publishing. In the years since he came back from Buffalo, Jesper has made OEI into a major influence on contemporary Swedish poetry.» - Johannes Göransson
at August 04, 2010
Email ThisBlogThis!Share to TwitterShare to FacebookShare to Pinterest
Labels: Bruce Andrews, Johan Jönson, Johannes Göransson, Mark Novak, Sean Lovelace