Lucian Teodorovici - Suicide artists: to kill oneself by sleeping with as many women of easy virtue as possible, hoping to contract a fatal disease 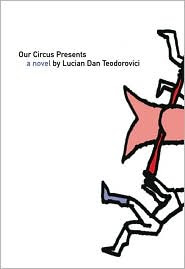 «The main character of the book, a man of thirty, lives in a modest flat on the fifth floor of a housing block. Every Sunday, the protagonist performs a kind of ritual: he climbs onto the window ledge and waits for a suicidal urge, which, however, never comes.
The events of the novel unfold over the course of three days. On the first day, the young man sets off to the town’s railway station in search of prostitutes. On the way, he runs into another young man, known during the story as the “bloke with the orange braces”, who has hanged himself from an old steam engine in an unused siding. The protagonist saves him and takes him to the station hospital, from where the bloke with the orange braces discharges himself on his own two feet. The main character will later find the man he saved in a railway workers’ bar. He is unwillingly embroiled in a fight provoked by the bloke with the orange braces, who breaks a chair over the head of one of the prostitutes in the bar, leaving her in a pool of blood. For the second time in the space of the same day, the protagonist saves the bloke with the orange braces, this time from the fury of the drinkers in the bar, and takes him back to his own flat. This is where the entire atmosphere of the story takes shape : a disabused world of strange neighbours and a building superintendent who is an old woman yearning for a relationship with a young man of thirty.
During the other two days covered by the action of the novel, we discover that the young protagonist is a member of a kind of club for “professional suicides” – people in search of death, sometimes for the most stupid reasons and in the most bizarre ways: one wants to kill himself by sleeping with as many women of easy virtue as possible, in the hope of contracting a fatal disease; another wants to commit suicide by drinking huge quantities of the finest quality whiskey, until he falls into an alcoholic coma; etc. They are all “suicide artists”, and it is into this strange group that the young man of thirty would now like to introduce his new friend. Parallel to these events, the two attempt to find out whether the prostitute in the bar has managed to survive being hit over the head with a chair. The answer will not be revealed until the end of the novel.
The finale closes the circle of the tale: during a further visit to the railway station, the protagonist discovers that the prostitute has died. He does not tell his new friend about this. At the same time, however, frightened at the turn that events have taken, he comes up with a plan: he convinces the bloke with the orange braces to go to the station, to the locomotive where he first found him. And he proposes that they both commit suicide. The young man tells his companion that in this way the railway workers will understand that they both regret the incident with the prostitute – and they will be forgiven. In fact, the protagonist’s plan is to free himself from the noose and to chase away anyone who tries to save the other, allowing him to die and thereby escaping from any legal consequences of his association with the prostitute’s murderer. The plan fails, however, for various reasons – the protagonist does not allow his new friend to die, but rather tells him the truth about the prostitute and about what he has been planning. It all ends with a roar of laughter, an agonised roar of laughter which consecrates the general principle and theme of the book, according to which whoever has failed at everything else in life can only be consistent and fail at his own death.» - www.romanianwriters.ro

"Romanian journalist Teodorovici's quizzical fable pursues the thwarted efforts of a couple of ne'er-do-wells to commit suicide. The narrator, having experienced his share of drunkenness and failure, no longer entertains hope for the future and contemplates jumping from the ledge of his fifth-story apartment building each morning. One day, he ends up “saving” a young man from hanging himself. The narrator soon learns the man (referred to only by his orange suspenders) frequently stages his hanging, only to be rescued by passers-by. Still, the narrator senses a kindred spirit and follows him to a bar, where the two become involved in a brawl. Later, they pursue then dodge “the urge,” and the novel allows the randomness of their actions to stand in for a kind of existential tension. In the end, though, for all its playfulness, there's no rhyme, reason or plot to this sadly inexplicable adventure." - Publishers Weekly

“Outlying districts dominated by aggressive gypsies; filthy trams full of motley and dubious people; strange, elderly pensioners, the suspicious and malevolent neighbours in insalubrious blocks of flats; homeless glue-sniffers – this is the everyday circus that unfolds in the background of the novel.” - Marius Chivu

“The core of the story is the escapade of a pair of melodramatic faux suicides, who existentially glide through the periphery of all unimaginable worlds in search of the miraculous ‘nothing’. Two hundred pages of one-hundred-per-cent Romanian circus flow before your eyes in this successful spectacle, not recommended for faint-hearted pensioners, but recommended to all those who want to taste a serving of life prepared slightly differently, according to an original recipe, with ninety-nine extremely piquant flavours.” - Alin Ionescu

“The publication of Our Circus Presents constitutes, without any exaggeration, an event. The novel is an anthology of memorable scenes, whose tipping point can be anticipated in every sequence.” - Şerban Axinte

“There is much laughter in Teodorovici’s novel, the uproarious laughter of characters faced with a ridiculous world, the healthy laughter of the reader, black humour, the absurd, self-irony, linguistic humour, and situational comedy. But behind the scenes there is also enormous sadness. The sadness of the clown (the reader-clown, the character-clown), who is all the sadder the more acutely he understands his condition as a man who, after having failed at life, cannot but fail at death.” - Sanda Tivadar

“Besides the verisimilitude of the language and the surprising naturalness of events that are by no means natural, Lucian Dan Teodorovici’s book has the merit of localising its action in the strictest present. This anchoring in the present is not one that is in ‘major events’ ; there is no trace of ‘mythic figures’ in the pages of Lucian Dan Teodorovici. The spectacular is extracted from the most innocent of places, and if this has piqued your curiosity, then read the novel.” - Cristina Ionica

«Our Circus Presents... begins promisingly enough, with the narrator perched on the: "cold ledge of a fifth-floor window". Yes, "just as on every other day", he's leaning towards suicide - and, like every day, never leans out quite far enough. He realizes his efforts are fairly ridiculous and pathetic, but at least there's some interaction with other humans when they talk him down from (or complain about) his suicidal tendencies.
He obviously runs with the wrong crowd, too: among his few friends is a theology seminar graduate who tried to kill himself by having as much sex as possible, the (typically, for this book, bizarre) idea being that he'd contract some fatal disease. He fails - only contracting any number of curable venereal diseases - and then decides on a new plan, to drink himself to death - but only with "the finest whiskey" (which, of course, he can't afford, leading him to postpone the supposedly inevitable until he's saved up enough to go out in style).
The narrator also comes to the rescue of yet another would-be suicide -- who turns out to be yet another person who likes to go through the motions but obviously isn't really all that eager to go all the way through with it.
The narrator, too, is called out by his supposedly suicidal friends:
"You've given yourself away," he said. "Now do you see why I told you that you'd never kill yourself ? Because you have too many motives. That's the main, in fact the sole motive a normal person should have for killing himself: not to have any motive. Because behind each of those motives lies hidden a wish. And any wish, believe me, brings with it some hope of fulfillment.
Sex is certainly one of those wishes (and not just for the narrator), and the narrator currently isn't getting enough of it; he does mention his affair with a considerably older neighbor who then moved away. Otherwise there's not much to the narrator's life: other than that he's thirty-two, a lay-about (with a successful older brother), and once dabbled at being a Jehovah's Witness he reveals very little about himself.
He does admit there's not a whole lot going on in his life:
There are days - what am I saying: months ! - when I desperately wait for events, praying for something the hell to happen, hoping for some phone call to wrench me out of the numbness, to inform me that, somewhere in the apparently so immobile world, something is happening worthy of my attention. But the phone call doesn't come, however much I pine away waiting for it.
He may be a very passive guy, but at least there is a bit of action in the novel - some violence, a few thwarted suicides, some off-scene drama. Despite death hovering over all of it, it's surprisingly boring. There's quite a bit of suicidal theorizing and philosophizing, too, and that too isn't very compelling; by comparison, even something like Jean Teulé's The Suicide Shop offers a sharper take on the subject.
Our Circus Presents... merely meanders. Yes, there's a bit of dramatic tension surrounding the death and the possible death of some of the secondary characters, but for the most part Teodorovici just seems to be treading water. This may be a fair representation of the new ennui of post-communist Romania (though you could barely tell where or when the novel is set, as the narrator is largely inattentive to anything except for his extremely limited world), but it doesn't make for much of a read. The meandering parts are done well enough - the scenes and episodes read well enough, with the occasional amusing scene - but there doesn't seem to be much of a point to it. Yet the novel does not manage to revel in any sense of pointlessness, either, which the subject-matter would certainly have also allowed for.
Teodorovici writes well enough, but he hasn't told much of a story. His characters remain nameless - appropriately enough, since the reader hardly cares who they are. And even something as serious as suicide remains little more than a game here, with the lone (possible) instance where it's not left far too peripheral.
A dud.» - M.A.Orthofer