Grace Krilanovic – A vampire novel as Céline would have written, with dashes of Burroughs and Tom Verlaine playing guitar in the background 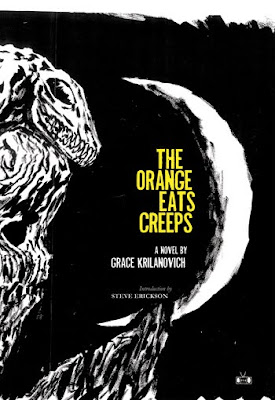 «It’s the ’90s Pacific Northwest refracted through a dark mirror, where meth and madness hash it out in the woods... A band of hobo vampire junkies roam the blighted landscape—trashing supermarket breakrooms, praying to the altar of Poison Idea and GG Allin at basement rock shows, crashing senior center pancake breakfasts—locked in the thrall of Robitussin trips and their own wild dreams.
A girl with drug-induced ESP and an eerie connection to Patty Reed (a young member of the Donner Party who credited her survival to her relationship with a hidden wooden doll), searches for her disappeared foster sister along “The Highway That Eats People,” stalked by a conflation of Twin Peaks’ “Bob” and the Green River Killer, known as Dactyl.
With a scathing voice and penetrating delivery, Grace Krilanovich’s The Orange Eats Creeps is one of the most ferocious debut novels in memory.»

"[A] slyly arch debut. The story careens from encounter to encounter, bursting into vibrant tableaus of images and barrages of prickly observations. Krilanovich's postmodern mashup is refreshlingly piquant and playful, reminiscent of postmodern Euro fiction and full of poison pill observations." - Publishers Weekly

"For some the intensity and boldness may be a shock, for the rest of us the exhilaration of such a novel is nearly beyond calculation. If a new literature is at hand then it might as well begin here." - Steve Erickson (from his Introduction)

"Like something you read on the underside of a freeway overpass in a fever dream. The Orange Eats Creeps is visionary, pervy, unhinged. It will mess you up." - Shelley Jackson

"Wandering back and forth between the waste spaces of the Northwest and the dark recesses of its narrator's mind, The Orange Eat Creeps reads like the foster child of Charles Burns' Black Hole and William Burroughs' Soft Machine. A deeply strange and deeply successful debut." - Brian Evenson
Labels: Grace Krilanovic Steve Erickson