Malcolm Braly - This novel about prison life is replete with stunning characterizations, moment-by-moment dramatics and minutiae that could only emanate from the acumen of someone who has been there. It also gyrates wildly into the type of fantasy that could only have come from a stir-crazy mind 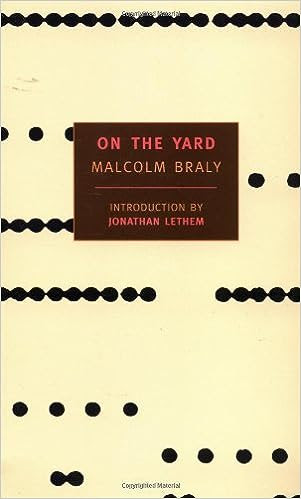 
A major American novel, and arguably the finest work of literature ever to emerge from a US prison, On the Yard is a book of penetrating psychological realism in which Malcolm Braly paints an unforgettable picture of the complex and frightening world of the penitentiary. At its center are the violently intertwined stories of Chilly Willy, in trouble with the law from his earliest years and now the head of the prison’s flourishing black market in drugs and sex, and of Paul, wracked with guilt for the murder of his wife and desperate for some kind of redemption. At once brutal and tender, clear-eyed and rueful, On the Yard presents the penitentiary not as an exotic location, an exception to everyday reality, but as an ordinary place, one every reader will recognize, American to the core.


This novel about prison life is replete with stunning characterizations, moment-by-moment dramatics and minutiae that could only emanate from the acumen of someone who has been there. It also gyrates wildly into the type of fantasy that could only have come from a stir-crazy mind. For example, one of the major characters, a psychotic Naziesque youth, eventually almost succeeds in flying out of prison... no, not with the wings of an angel but in a balloon his cellmate had been stitching together. Because of this, Frank Elli's The Riot has a more realistic charisma. But the reader won't soon forget the men, particularly Manny, ""the baby raper,"" a gentle soul who truthfully was sent up on a bum rap; Paul Juleson, a reader condemned by the court and by himself for the murder of his wife; Chilly, the 25-year-old operator who was ""born old,"" and could manipulate everything except his own feelings. Then there's Society Red, a man who has found a home behind bars and freaks like Gasolino, killer who finds an unusual way of obtaining a high, and Candy Cane, ""stuff,"" the perfect cell and bed partner. Mr. Braly is an extremely effective and talented writer. One could only wish that his imagination were as disciplined as his prose. - Kirkus Reviews

Life in prison is the subject of Braly's 1967 classic On the Yard, now back in print with an introduction by Jonathan Lethem. Braly, who wrote the book while doing time in San Quentin, has an uncommon ear for the rhythms of big house speech. The expertly drawn ensemble cast and institutional insight may remind readers of One Flew over the Cuckoo's Nest Braly does for prisons what Kesey did for the insane asylum. - Publishers Weekly

"A handful of authors have portrayed the human condition of prison life with the indelible stamp of authenticity—Dostoevski, Alexander Solzhenitisyn, Brendan Behan, and Genet are among them. Now in the same genre comes Malcolm Braly’s On the Yard…His eye is true and his writing faultless." — The Times


Born with a silver spoon, Malcolm Braly became a mouthpiece for the no-hopers and might-have-beens in America’s prisons. He was inside for almost twenty years and finished On the Yard (1967) in the final few months of his stretch. It was an unlikely career for a novelist, though Braly, who took a dim view of his success, never seemed surprised, certain that his fate had been forecast from the start. His father ran a West Coast automobile agency in the 1920s, a blue-chip business that folded with the Crash. Braly was five years old; in no time he was fingered as a sneak, a show-off and a thief. False Starts (1976), Braly’s remarkably moderate and candid memoir, never hymns his childhood unhappiness: his parents left, first his mother, soon after his sister was born, then his father, and Braly ended up in a Catholic boarding-school north of Seattle. Together with a cluster of friends, he began to steal. The boys collected milk and soda bottles from the dump to turn in for deposits, but when the supply of empties dried up, they nicked bottles from neighbourhood garages, then progressed to back porches and finally made it into a kitchen, taking milk from the icebox and tipping it down the sink. ‘At a certain age most boys steal,’ Braly admits: ‘most also stop. I didn’t.’
In his teens, he turned his hand to bigger things. He was a sucker for the latest fashions; although he knew the shortages of wartime entailed forbearance (there was the example of the dowdy English princesses whose various uniforms looked as if they had been made from blankets), new clothes gave him a heart-pumping thrill. He may have been hard up, but he wanted several cashmere sweaters, a dark blue jacket and a pair of saddle shoes. Late one night he broke into a dry-cleaner’s and took everything that fitted. It was dark in the shop and the booty was disappointing, for the most part the kinds of suit old men would wear to church, but he was pleased with a gabardine coat he picked up. Unfortunately, he ran into the owner of the coat in a pool hall a few months later, a student who had reported the theft of the coat from Nelson Cleaners and was able to identify a cigarette burn on the hem: the police had their burglar. There are a welter of coincidences and head-to-head encounters in the memoir, Braly tending to cast himself as the hopeless chancer. He fumbled his way through reform school before circumstances began to carry him in and out of prison, more often in than out.
Impatient and guileless, he was easy meat for other crooks. A friend roped him in to do a job on the home of a wealthy Hollywood producer – ‘all we had to do was walk in and fill our pockets’ – but the producer was broke and Braly got six years for a 35 cent robbery. There were more desultory crimes to come. He robbed a large suite of dental offices hoping to find hundreds of dollars squirrelled away; he came away with 11 bucks which he lost in the escape. Unable to buckle down and make a go of things, he stayed on the move, drifting like Huck on the river from one situation to the next, resurfacing in prison. He was middle-aged when he was finally released, a ‘young/old’ man who had spent most of his adult life banged up and who knew little about the outside world; his memoir looks back on the experience ‘in the form of a journey, a long and often difficult voyage through the life of our times, which, finally, finds the grace of a safe harbour’. He settled in Southern California, but there would be no early retirement in the sun for the long-term con: he died in a car accident at 54. - James Francken


Malcolm Braly (1925–1980) was born in Portland, Oregon. Abandoned by his parents, Braly lived between foster homes and institutions for delinquent children, and by the time he was forty had spent nearly seventeen years in prison for burglary, serving time at Nevada State Prison, San Quentin, and Folsom State Prison. He wrote three novels behind bars, Felony Tank (1961), Shake Him Till He Rattles (1963), and It’s Cold Out There (1966), and upon his release in 1965 began to work on On the Yard. When prison authorities learned of the book they threatened to revoke his parole, and he was forced to complete it in secret. Published in 1967, after Braly’s parole had expired, On the Yard received wide acclaim. It was followed by his autobiography, False Starts: A Memoir of San Quentin and Other Prisons (1976), and a final work of fiction, The Protector (1979). Malcolm Braly enjoyed fifteen years of freedom before his death in a car accident at age fifty-four.

at October 03, 2014
Email ThisBlogThis!Share to TwitterShare to FacebookShare to Pinterest
Labels: Malcolm Braly