Adam S. Cantwell - These stories are richly imagined mysteries. They could be fairly equated with the works of Kafka or Borges if their prose were not so luxuriant and surprising at every turn. While readers may not chortle in experiencing these awful fantasias, they will be captivated by them


Bastards of the Absolute contains eleven pieces — a mix of novellas and short stories, revised and reworked especially for this book — along with nine previously unpublished drawings by Charles Schneider and an introduction by George Berguño.


'The stories in Adam Cantwell’s Bastards of the Absolute are richly imagined mysteries. They could be fairly equated with the works of Kafka or Borges if their prose were not so luxuriant and surprising at every turn. Contemplating the mood and storylines of these arresting pieces, a quote from Poe’s The Narrative of Arthur Gordon Pym comes to mind: “My visions were of shipwreck and famine; death or captivity among barbarian hordes; of a lifetime dragged out in sorrow and tears, upon some gray and desolate rock, in an ocean unapproachable and unknown.” The fate of each protagonist in Cantwell’s collection delineates or fulfills Pym’s fantasy—one that is both lavish in its exoticism and unbounded in its desolation. Although these beings are entrapped in worlds that to all appearances turn upon axes of torment, they are as likely to be resigned as resistant to their cruel destinies. While readers may not chortle in experiencing these awful fantasias, they will be captivated by them.' The book contains eleven pieces — a mix of novellas and short stories, revised and reworked especially for this book — along with nine previously unpublished drawings by Charles Schneider and an introduction by George Berguño. - Thomas Ligotti


I predict that Adam S. Cantwell’s Bastards of the Absolute is destined to survive the passage of time. I predict also that the book that you, dear reader, are holding in your hands will join the ranks of the classics of strange fiction. Moreover, there are stories in this collection — stories such as ‘Face in the Wall’ and ‘Moon Paths of the Departed’ — which are masterpieces of the genre; stories that are destined to be reprinted time and again. - George Berguño; from his introduction


This is a delight of a book.  It comprises ten short stories and a novella, “Orphans on Granite Tides” and invokes only the best of the format’s writers; Borges, James, Lovecraft and Poe.
The style throughout is gothic.  Settings include castles, dungeons and cave complexes and the scenes are often oppressive, emphasised by the lack of light, overbearing rooms and inclement weather.  The protagonists are in the main troubled artists, as often as not thwarted in their ambition and endeavours.  Authors and composers feature as well as a trade agent and a book hound.  Most are European and in the main the stories themselves are set in the first half of the 20th Century Europe, featuring evocative cities such as Berlin, Paris and Helsinki.  Exceptions are “The Filature”, a tale of a German businessman exiled to China to conduct interminable negotiations with a sadistic factory owner and “Orphans on Granite Tides” which revolves around the supposed journal of a Native American mystic.
Each tale involves fantasy, horror and the bizarre.  They are told in the first person in classic gothic styles. Journal and diaries feature strongly, as do letters and the transcript of an interrogation.  The literature and classical music of the period are explored and there is a constant struggle between the traditional and orthodox conservatism and the new and revolutionary movements typical of the period.
So what are the stories about?  “The Face in the Wall” centres on, well, a face in a wall.  “The Notched Sword” is set in Warsaw in 1939 and features a double agent who, whilst riding a horse, is literally split vertically in two.  Not that it stops him (them?) from carrying on his life and work.  The protagonist of “Moonpaths of the Departed” is a composer, recovering from a breakdown, enticed to a mid-European castle built upon a series of prehistoric caverns.  What he witnesses down there influences him to compose a dark and dangerous work that has unexpected effects on those who hear it and lead to him fleeing for his life.
I cannot conclude without remarking on the splendid presentation of this book.  It features illustrations by Charles Schneider and cover and endpapers by Eduard Wiiralt.  Like the stories themselves, they are grotesque, beautiful, complex and haunting and reward repeat visits to fully appreciate their worth. - Simon Ives
http://www.britishfantasysociety.org/reviews/bastards-of-the-absolute-by-adam-s-cantwell-book-review/


I think it's appropriate to open this review with a look at the physicality of the book itself. Egaeus Press is consistently publishing some of the best looking hardcover books being put out today. The appearance and feel of the book is enough to get any jaded bibliophile to drool.
Now, even though the book as a physical object is gorgeous, the most importantaspect is the quality of the writing between the covers. Thankfully, this book delivers.
Adam S. Cantwell is a British author, and part of what I'll for now call a "European strange literature" movement. Certain things that come to mind when talking about this subset of weird literature: Old World Europe, dense prose, intellectual narrators, decadence, surrealism. Many of these authors have their work published as beautiful, limited hardcovers from publishers such as Passport Levant, Ex Occidente, Side Real Press and now Egaeus Press.
Several of the stories in this collection have appeared in limited tribute anthologies to Bruno Schulz, Mikhail Bulgakov, and Hanns Heinz Ewers, or as very limited Passport Levant editions, so it's great to see them all collected in a beautiful, yet affordable edition.
Some of my favorites:
The Face in The Wall is a story about a man who is imprisoned inside a city wall. His entire body is in in the wall, with only his face exposed. He spends ages in the wall, watching the changes of the city, and coping with ill treatment from citizens of the city. A clever blend of fantasy and horror, it's great story to open the collection with.
Next up is The Filature, a story in tribute to Hanns Heinz Ewers. As punishment, a German man's employers send him to a Chinese silk factory. The story reads as his journal, and we see the man repeat many of the same mistakes that brought about his corporate exile in the first place. Some truly creepy moments in this one.
Music is an important aspect of several stories in the collection. Three of which (Moonpaths of the Departed, The Kuutar Concerto, and Symphony of Sirens) first appeared collected together as A Pallid Wave on Shores of Night by Ex Occidente. Another, Beyond the Two Rivers: A Symphonic Poem, first appeared in The First Book of Classical Horror Stories edited by D.F. Lewis. I loved the shared themes of these stories, and how they managed to all use music differently. Several (all?) feature real life composers. My favorite of the four may be The Kuutar Concerto,  which features Sibelius having a drunken night out in seedy bars after an incident at one of his concerts. He runs into someone who knows him from the past, and the drunken revelry spirals into the realms of the otherwordly.
Only For The Crossed-Out is Cantwell's Bulgakov tribute, and is a wonderfully absurd story. A clerk of sorts works in an archive of books where they cross-out and censor books.Things take a turn for the interesting when our protagonist falls down a chute and becomes trapped in a basement mass-grave of books.
The collection ends with Orphans on Granite Tides, originally released as a stand alone by Ex Occidente. Billed as a "Metaphysical Grotesque," this tale follows a German man who finds rare books and manuscripts as his occupation, although this job of his has become his life. This serves as a frame story for a peculiar document he finds. The document claims to be a sort of memoir by a well traveled Native American, who has metaphysical experiences and sees the world within our own world. A difficult piece, but one that shines for it.
This book was my first experience with Adam S. Cantwell's fiction, and shan't be the last. His fiction is tantalizingly mystifying, and brings readers to a magical, Old World Europe that is equal parts horrifying and beautiful. - www.arkhamdigest.com/2015/08/review-bastards-of-absolute-by-adam-s.html

A quote from literary cult figure Thomas Ligotti no less!
The introduction by George Berguño also contains this passage;
“I predict that Adam S. Cantwell’s Bastards of the Absolute is destined to survive the passage of time. I predict also that the book that you, dear reader, are holding in your hands will join the ranks of the classics of strange fiction. Moreover, there are stories in this collection — stories such as ‘Face in the Wall’ and ‘Moon Paths of the Departed’ — which are masterpieces of the genre; stories that are destined to be reprinted time and again.”
Both very strongly worded pieces of praise for this collection of stories and its writer then.
And now to the book itself, it is a beautiful lithographically printed, 256 page sewn hardback with a stunning embossed wraparound cover and printed endpapers which are both by Eduard Wiiralt.
There are also a number of fascinatingly twisted black and white illustrations throughout by Charles Schneider, one of which is included as a postcard with initial copies.
The artwork is absolutely sumptuous and I couldn’t help but feel that this just had to be an outstanding read because it looked so very good. I have not been proved wrong as yet. Egaeus Press are definitely one to watch as their output so far has been of such a high standard that it’s hard to see them succumbing to such vulgar things as the whims of market forces or seeing their quality control slipping any time in the future. Head over to their ‘morbid and fantastical’ website (here) to order a copy of this truly outstanding book but be quick as it is limited to only 250 copies.
- unsubscribedblog.wordpress.com/2015/07/01/bastards-of-the-absolute-by-adam-s-cantwell-via-egaeus-press/ 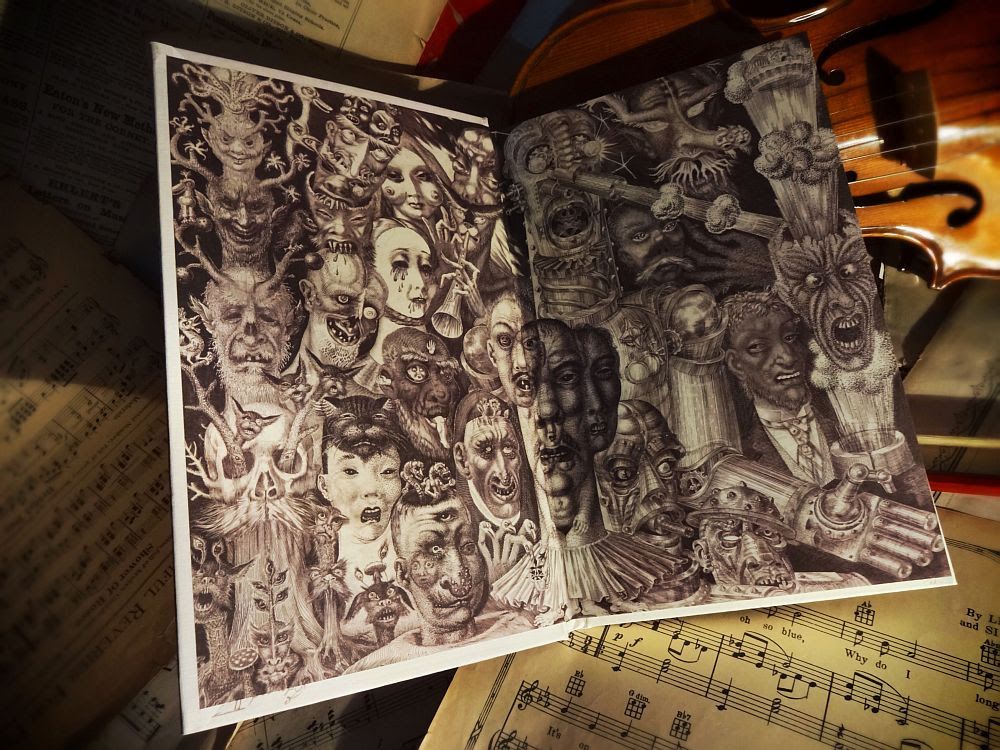 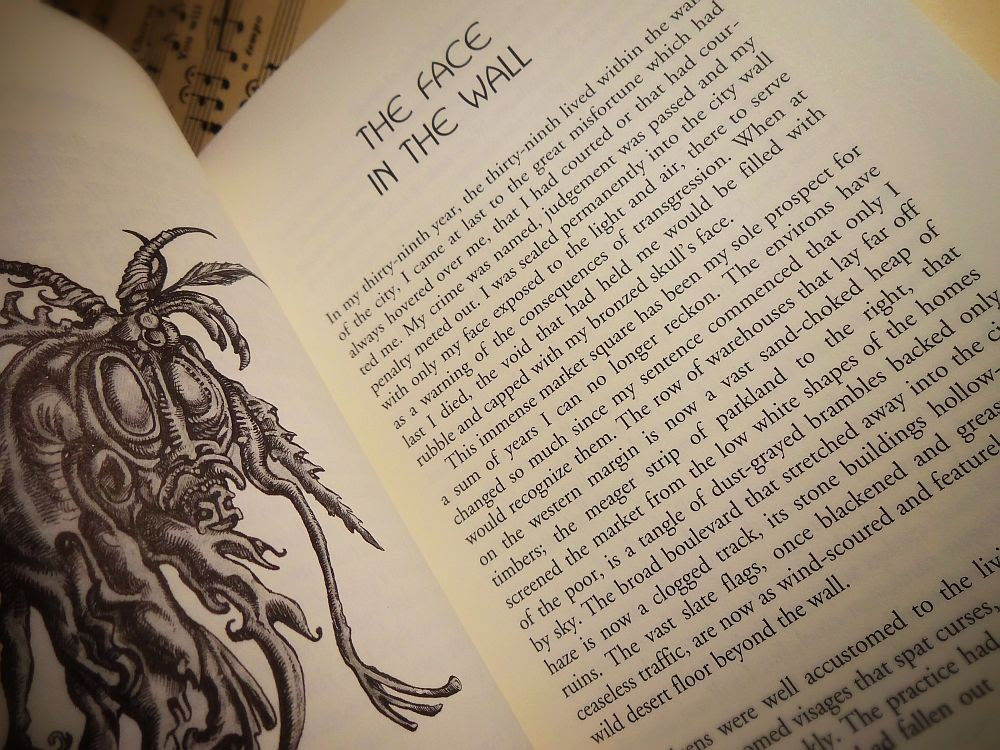