Albert Goldbarth – Oh! my dear fellowing beings, let us squeeze ourselves universally into the very milk and sperm of kindness 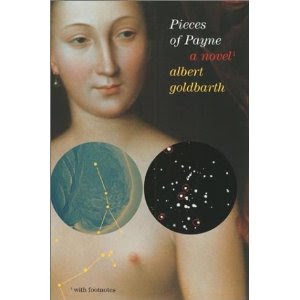 "How is Eliza’s divorce connected to the rise of twentieth-century quantum physics? Why does the steamy promise of “a key unlocking a door at a cheap motel along I-35” lead us to a consideration of Moby-Dick? What does one physician’s fake appointment book have to do with Columbus, werewolves, and Fanny Burney’s famously excruciating nineteenth-century mastectomy? Albert Goldbarth sets his story of love’s daily pleasures and griefs upon a foundation of ever-branching footnotes—from the strange worlds of supermarket tabloids and the Legion of Super-Heroes to more contemplative forays into gender politics, Dickens scholarship, and medical anomalies. By taking us on this mind-bending journey, he shows us how our lives are both confused and empowered by the multilayered universe around us.
Pieces of Payne is the first novel by Goldbarth, a two-time winner of the National Book Critics Circle Award."

“A fascinating divided work. The division between text and notes creates an intentionally challenging reading experience.” —The Boston Globe

“Goldbarth, a whirling dervish of a poet, has fashioned a splendidly clever and tender first novel… A dazzling, sagacious, and poignant search for oneness within the many-faceted chaos of human life.” —Booklist

“Riffing on the paradoxical tragedies and miracles of our civilization, Goldbarth has produced a thought-provoking book that offers the reader ample recompense for its challenging format.” —Publishers Weekly

"Reading Albert Goldbarth is like watching the valedictory address at a university created by a merger between Clown College and MIT. His poetry is aggressively intelligent, full of pratfalls and rimshots, and, embracing low culture as readily as high, science as readily as literature, encyclopedic in a manner far more common to novelists such as Pynchon and McElroy. In this, Goldbarth's first novel, readers of his poetry will recognize some familiar roof-jumping. Here's the story: Eliza Phillips meets former teacher Albert Goldbarth for drinks, during which she speaks of her divorce and recent lesbian marriage, of celestial order and beauty, and of growing up in the home of her philandering, surgical-superstar father. But the hanger gives no notion of the clothing hung thereon. The meeting comprises eighty-seven pages. Remaining pages consist of footnotes and commentary. Everything gets thrown into the hopper - news items, verse, appointment books, quotations, lists, mini-essays - as the novel's long legs stride as Yeats's fly over subjects as disparate as Columbus, werewolves, Fanny Burney's nineteenth-century mastectomy, Moby-Dick, ancient Japan, a man with fiberglass tiger-whiskers implanted in his upper lip, quantum physics, supermarket tabloids, the Legion of Super-Heroes. The title commemorates astronomer Cecilia Payne, a role model for Eliza. "I wanted big theories that unified," Eliza says of her parents' divorce and her early fascination with astronomy. One cannot read Pieces of Payne without thinking of Hopscotch or of Nabokov's poem-and-exegesis Pale Fire, but Goldbarth is, as always, much his own man. Impossible to mistake the author here: the play of this man's mind over the landmarks and detritus of our time. Eliza's conversation sets off and fans to flame sparks in Goldbarth's mind that cannot fail to ignite the reader's." - Review of Contemporary Fiction