S.T. Gulik - Her metaphysical crusade for truth, freedom, and love turns to carnage due to the unfortunate reality that she is completely insane 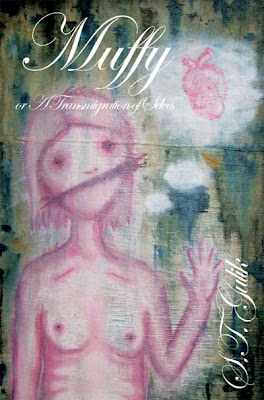 S.T. Gulik, Muffy: or A Transmigration of Selves (AuthorHouse, 2007)

«Muffy is the daughter of an extremely wealthy and powerful captain of industry and a famous lawyer. Fineries and privilege permeate her existence. Though publicly her life is perfect she lives in her own private hell; repeatedly raped by her father, ignored by her mother, and condemned to a life of meaningless acquaintances. One day she decides that it might be interesting to be raped by someone who she's not related to. She leaves home in search of adventure and is almost immediately captured by a female artist/serial killer who she quickly falls in love with. Soon she is plunged into the festering sore on the underbelly of society pursued by CIA, police, and Illuminati assassins. Her metaphysical crusade for truth, freedom, and love turns to carnage due to the unfortunate reality that she is completely insane.»

"Muffy: or a Transmigration of Selves is the thin, zigzagging, three dimensional line between brilliance and insanity. Gulik, a man who claims to be an enlightened immortal cockroach in the service of the Goddess of chaos, is an interesting blend of equal parts Tom Robbins, Robert Anton Wilson, and Jhonen Vasquez. He uses the theme of love as self destruction to form an eloquent crash course in the fundamentals of quantum mechanics. The story is original and every bit as funny as it is disturbing. It's the type of book that a young Countess Bathory might have kept in her bathroom. Gulik plays with taboos like a cat with a small snake and questions a number of axioms which are rarely addressed, if ever, in this PC nightmare which we have made for ourselves. This book is beautiful, depraved, thought provoking, bizarre, and absolutely not for children. This is transgressive literature at its best." - Claire Ashton

«Transgression! BOO! Although a patience-stretching handful by their very definition, I happen to think that all of us could use at least a couple of projects in our lives each year designed specifically to push boundaries through the embrace of taboos; and one of the best examples I saw in 2009 was S.T. Gulik's disgusting yet oddly compelling Muffy: or A Transmigration of Selves. A violence-filled erotic story in the tradition of such Victorian classics as The Story of O., Gulik updates the debauchery to reflect our gonzo, riot-grrl times, crafting a lesbian love story of sorts between a full-time masochist addicted to risky behavior and a sadistic professional artist who makes sculptures of pain literally out of her victims' body parts (a big hit among the Illuminati members secretly running the government, don't you know). Silly, nauseous, and undeniably filthy, those who will be fans of Muffy already know who they are, even if they're not in the habit of telling anyone else.» - cclapcenter.com


«About the Author: Stephen Gulik was born within the walls of Irish castle on October 21, 1681. The master of the house was a mister Edmond DeSwitch who had a keen interest in the art of alchemy. Though a complete failure in every aspect of his work, his incessant fumbling with God's video game led so severe consequences for all who surrounded them. Mutations of mind and body were not altogether uncommon in this household, which ultimately resulted in Mr. Gulik's departure at the tender age of one. He traveled the world in search of wisdom and new forms of mayonnaise. Eventually he found himself face to face with the goddess Eris who, finding him cute and less annoying than her other saints, sainted him on the spot and introduced him to her good friend Timothy Leary. Timothy in turn introduced Gulik to an electric cheeseburger who eventually talked him into taking over the mind of Ronald Regan and forcing him to run for president. In the body of the Gipper, Gulick became hooked on crack and completely screwed the U.S.A. condemning it to hundreds of years of masochistic frivolity. Gulik looked upon his creation and saw that it was good. However, since his importing of crack had completely buggered the lower class, he began to feel guilty. So he did the sensible thing. He abandoned the president's body and dedicated his life to making sure that broccoli will never again seize the reigns of the world. He wrote his first book Muffy: or a Transmigration of selves in 1999 and subsequently misplaced it. This novel was followed by several screenplays which have also been lost. Word has it that he has recently been spending too much time with the ghost of Charles Bukowski and a second novel is currently underway.»

«Enticing, deviant, obscure and obtuse, this story is anything but your average cup of joe.
The experience starts with the cover, pink and beautiful, (a benign-looking topless waif practically waving at you) yet somehow unsettling. The theme carries to the back of the cover, where the bright pink is decorated with a swarm of cockroaches.
I like it already.
This is a tangled love story, comprised of a lonely rich girl, and artist, the illuminati, sexual torture, and Stockholm's syndrome- where suddenly the victim becomes co-conspirator. It questions basic morals with complex dilemmas, in a twisted, upside down, Picasso kind of way.
Brilliant. Unsettling. Funny and Sickening. I couldn't put it down.
Not for the faint of heart - But if you do choose to pick it up, read it and get over yourself already. We live in a world of upside-down, topsy-turvy controversy, where I would not be surprised to find when my ticket is up, God greets me in the form of a giant, omnipotent, benevolent cockroach.
It's dark, It's different. It's pleasantly sinister.» - Misty L. Gersley

«Muffy is a bittersweet coming of age tale about a 14-year-old girl who leaves home in search of new experiences. No... no... but that's what you might want to tell people when they pick up the book with the cool cover and ask you what it's about.
What is Muffy really about... well there's rape, pedophilia, the forced eating of excrement, all kinds of inventive tortures, incest, baby killing... oh you want me to stop, I was just getting started...
Muffy really does explore a lot of things that are both thought provoking and stomach churning. I was especially interested in Sarah's "artwork" as I've tried that concept unsuccessfully myself in a few horror shorts. Gulik, however makes it work... and it is indeed disturbing.
Overall Muffy is a wonderfully sick book that could have been bit shorter and still worked.
And one I won't soon forget (even if I wanted to).» - Ashton M. Heyd
at June 09, 2010
Email ThisBlogThis!Share to TwitterShare to FacebookShare to Pinterest
Labels: Ashton M. Heyd, cclapcenter, Claire Ashton, Misty L. Gersley