Amy Hempel - Every sentence isn’t just crafted, it’s tortured over. Every quote and joke is funny or profound enough you’ll remember it for years 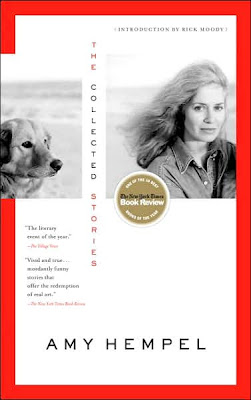 
"I wish it never got any darker than this, the moment that you can no longer tell that grass is green."


"Amy Hempel is a master of the short story. This celebrated volume gathers together her complete work - four short collections of stunning stories about marriages, minor disasters, and moments of revelation.
With her inimitable compassion and wit, Hempel introduces characters who make choices that seem inevitable, and whose longings and misgivings evoke eternal human experience.
For readers who have known Hempel's work for decades and for those who are just discovering her, this indispensable volume contains all the stories in Reasons to Live, At the Gates of the Animal Kingdom, Tumble Home, and The Dog of the Marriage. No reader of great writing should be without it. "

"Hempel's four collections of short fiction are all masterful; while readers await the follow-up to last year's acclaimed The Dog of the Marriage, this compendium restores the full set to print. The first of Hempel's books, Reasons to Live (1985), is justly celebrated by Rick Moody in his preface as a landmark of its era's "short-story renaissance"; it introduces Hempel's unmistakable tone, where a "besieged consciousness," Moody says, hones sentences to bladelike sharpness "to enact and defend survival." The second, At the Gates of the Animal Kingdom (1990), is the main reason to buy this book: used copies are scarce, and the collection contains stories like "The Harvest." Hempel's genius, whether in first or third person, is to make her characters' feelings completely integral to the scenes they inhabit; her terse descriptions become elegantly telegraphic-and telepathic-reportage, with not a word wasted and not a single fact embellished. Her great subject is the failure of human coupling, and she charts it at every stage: giddy beginnings, sexy thick-of-its, wan (or violent) outcomes, grim aftermaths. Seeing it laid out kaleidoscopically in this volume is an awesome thing indeed, and a pleasure lovers of the short story will not want to deny themselves." - Publishers Weekly

"Although Amy Hempel is little known outside the world of American fiction, she is deeply respected, even revered in her native US, as Rick Moody's effusive introduction to these collected stories indicates. Hempel, whose economic, oblique style of writing is most often compared to Raymond Carver, began to publish in the mid-1980s when short fiction, with Carver the doyen, was at its zenith. Following the millennial vogue for disproportionately long novels, the genre is reclaiming attention in a more self-consciously pared-down age. Hempel is, therefore, subject to some retrospective scrutiny.
In this volume, which comprises her four extant collections, dogs abound in almost every piece. And not simply dogs; animals here exist as catalysts, bystanders, protectors: "saints, guardian angels, my saviors, my friends".
Set mostly in the small beach towns around San Francisco, with its unique "eucalyptus fog", the voice in each tale – sometimes no more than a paragraph long – is generally that of a woman, sardonic, disaffected, lived in and lived through, often finding herself in blackly comic situations with neighbours, parents, in cars, and hospitals; always at the fag-end of a relationship. As one narrator comments: "I don't want to meet men. I know some already."
In "The Harvest", a woman involved in a horrific car accident is abandoned by the man she has been seeing for a week. "Do you think looks are important? I asked the man before he left. 'Not at first,' he said." Later the narrator explains in a coda that she has, in fact, exaggerated many of the circumstances of the piece. In what amounts to a sedulously neat masterclass in writing, this is a revision which amplifies, rather than detracts.
As Moody asserts, the brevity Hempel employs is almost Japanese, haiku-like in its precision. That is, until you get to "Tumble Down", the title story in Hempel's third collection, which at first glance is a ruminative letter from a woman hospitalised after a breakdown to a renowned artist she has met only once. In between the daily asides, oddball characters and petty humours of the institutionalised, we slowly learn of her grief at her mother's recent suicide.
In its length, pace and pathos, there is a semblance of an earlier, graver tradition of European writing. "I wish it never got any darker than this," she writes, "the moment that you can no longer tell that grass is green." In sleep she adopts the position her dead mother was found in, her anguish the more piercing because it is evident that theirs was a bitter relationship.
Hempel cleverly explores a similar ambiguity in two final stories – "The Uninvited", in which a childless woman approaching 50 suspects she might be pregnant as the result of a rape, and the erotic, exquisitely painful "Offertory". A relationship is ignited, then bleakly determined by the man insisting that the woman relate, each time they make love, the intimate details of her long-ago ménage à trois with a married couple. "Unimprovable," he says at the end. An adjective which – dogs notwithstanding – can be easily applied to the majority of these stories." - Catherine Taylor