Fernão Mendes Pinto - This text came second only to Marco Polo's work in exciting Europe's imagination of the Orient. Chronicling adventures from Ethiopia to Japan, Travels covers twenty years of Mendes Pinto's odyssey as a soldier, a merchant, a diplomat, a slave, a pirate, and a missionary 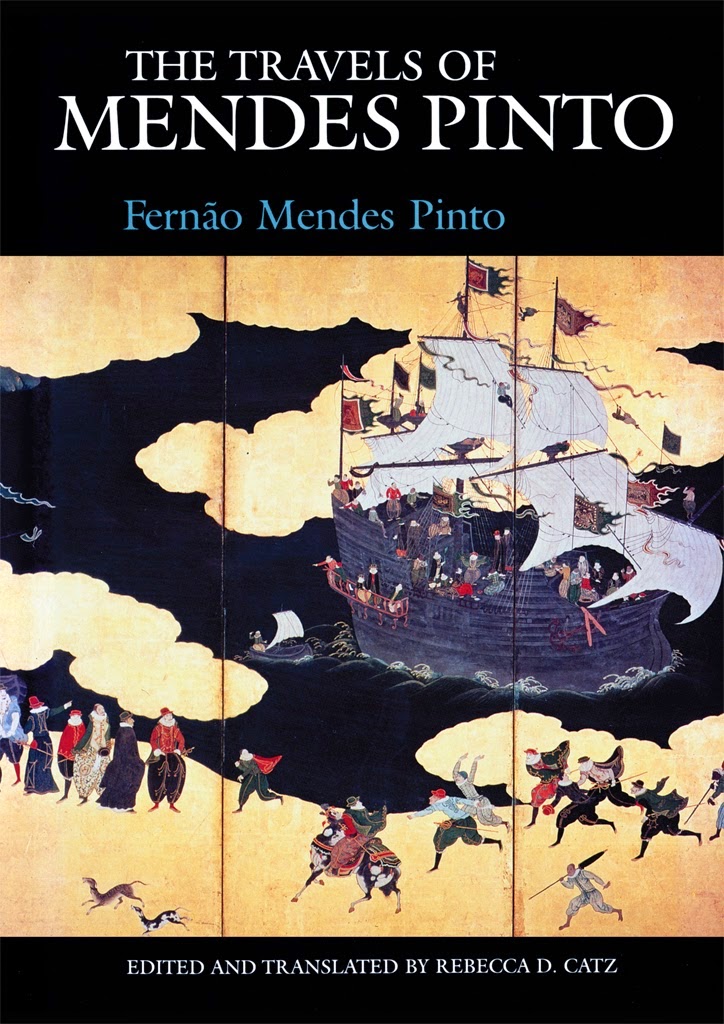 This text, ostensibly the autobiography of Portugese explorer Fernão Mendes Pinto, came second only to Marco Polo's work in exciting Europe's imagination of the Orient. Chronicling adventures from Ethiopia to Japan, Travels covers twenty years of Mendes Pinto's odyssey as a soldier, a merchant, a diplomat, a slave, a pirate, and a missionary, and continues to overwhelm questions about its source with the sheer enjoyment of its narrative.


After Marco Polo's, the European account of the exotic Orient that had the widest readership in the early modern era was probably the ''Peregrination'' of the Portuguese adventurer Fernao Mendes Pinto, called, in this beautifully produced modern edition, ''The Travels of Mendes Pinto.'' Originally published in 1614, the book went through numerous editions and was translated throughout Western Europe, where it both delighted and provoked a wide readership. Mendes Pinto had sailed for India in 1537, and he was in Asia during the years when the Portuguese forged a remarkable maritime empire beyond Suez.
The book's former popularity is easy to explain. Supposedly an autobiography, ''The Travels'' described the 20-year adventures of Mendes Pinto as soldier, merchant, diplomat, prisoner, slave, mariner, pirate and missionary in lands from Ethiopia to Japan. He was based at the strategic Portuguese outpost at Malacca, north of Singapore, and his succession of incredible voyages and tribulations, as well as his own personal redemption, recall the ''Odyssey'' of Homer. At the same time, his descriptions of the crowded ports, of the alternating trade and hostility among Christians, Muslims, Hindus and ''heathens'' (renegade Europeans in the service of Asian potentates) and of the easy combination of trade and piracy at the time provide the gritty details of European mercantile expansion that are often missing in more formal histories. It is a rousing tale, filled with pirate raids, caravans, court intrigues, narrow escapes and colorful descriptions of the customs of peoples throughout Asia, as well as a long section recounting the actions of St. Francis Xavier's mission to Japan. Little wonder it was popular in a Europe fascinated not only by the wealth and spices of the East, but by the lure of exotic lands and peoples and by the idea of an expanding Christendom.
Despite its wide popularity, ''The Travels'' has always been a problematic text, perhaps the most controversial one in the history of Portuguese expansion. Little is known of Mendes Pinto's origins or of his life after he returned to Portugal. He left no other literary works. He did not finish his manuscript until 40 years after the events he described, and the book was finally published 20 years after his death. Why it was delayed, what liberties subsequent editors and publishers took and how many of the obvious errors and inconsistencies were the result of later hands, the author's poor memory or his intent - all this can only be surmised, since the original manuscript is lost.
Mendes Pinto knew Southeast Asia and the ''lands below the wind'' well. He was among the earliest Europeans to visit Japan (if not the first, as he claimed), and what he wrote about the Japanese has the ring of accuracy. His descriptions of China, however, seem to be the result of what he heard or read and have been characterized as ''arrant nonsense'' by one later critic. In fact, even in the 17th century, the fabrications were so obvious that Mendes Pinto had become a synonym for liar. Since then, a legion of scholars has tried to set the record straight.
Is this an autobiography, fiction or an intentional mixing of genres with a more ambitious literary purpose? Rebecca D. Catz's introduction argues that ''The Travels'' is really a ''corrosive satire'' of all the institutions of Portugal and of imperial expansion and the ethic of the crusade. She is not concerned with Mendes Pinto's lack of accuracy, but rather believes that the obvious errors are intended clues to the satiric intent of the author, a sort of trail of bread crumbs in a lengthy picaresque critique of Portugal's maritime empire. Her complex thesis, based to some extent on circumstantial evidence, is not altogether convincing, although there are certainly many places in the book where Mendes Pinto makes a point of demonstrating how heathens act more justly or wisely than Christians. Whether ''The Travels'' is the work of a moralizing Marco Polo or a kind of ''Don Quixote'' of Portuguese expansion remains to be debated, as it surely will be in the next decade when the world takes stock of the quincentenary of Columbus and of Vasco da Gama.
Laying the controversy aside, there is plenty here for the modern reader. The translation is smooth, and there are helpful notes to explain the geographical references and the garbled versions of many Asian terms and titles. Ms. Catz is not a specialist on Asia, and her introduction and notes emphasize the literary aspects of the book, but she makes good use of the existing literature on Mendes Pinto for the historical and geographical details. The vivid descriptions of swashbuckling military campaigns and exotic locations make this a great adventure story.
Mendes Pinto may have been a sensitive eyewitness, or a great liar, or a brilliant satirist, but he was certainly more than a simple storyteller. At one point when he and his fellows were looting a Chinese pagoda and justifying it as God's will to its resident hermit, the old man is reported to have said: ''I now have before me something I never dreamed I would ever see or hear - inborn wickedness and feigned virtue all in one, that is - to steal and to preach!'' Whether the words were actually those of the hermit or Mendes Pinto's gloss, that, after all, was a pretty good description of the early years of European expansion in Asia.- STUART SCHWARTZ

Mendes Pinto (1510/14-1583) was a seaman, a diplomat, a pirate, a slaver, an explorer, an ambassador, a Jesuit novice and a celebrated writer. In 1537, in the height of the Discoveries, when the mysterious Orient had snared many of his countrymen’s minds with its wonders and riches, he boarded a ship heading to India. This was the beginning of a strenuous sojourn abroad that consumed more than 20 years of his life, and that took him to Malaysia, modern-day Myanmar, Siam, the Moluccas, China and Japan. In his travels he attacked ships, enslaved crews and was many times enslaved and sold himself, and was one of the first Europeans to make contact with many Asian nations. He took part in one of the earliest Portuguese expeditions to Japan, and he prided himself on having helped introduce firearms there.
What makes this such a great book? First of all, its realism; Mendes Pinto was not writing, like Marco Polo, from hearsay, or making stuff up like Mandeville: he was a truthful observer of everyday reality and his eyewitness accounts have historical value as richly detailed descriptions of that era. He was not working from former canons; like many of the great Portuguese explorers of that century, who were thankfully quite ignorant of Latin and the ancient authorities, and poor students of Humanism, he ignored all the nonsense from the Greeks and Romans and set about rewriting what was known about geography from personal experience. He was, and this is no understatement, one the earliest modern European traveller to apply what we now call the scientific method, free from preconceived notions, to travel writing.
He’s also important in anthropological and post-colonial studies. He was a generous, tolerant, unbiased observer of foreign customs; oh, he was a bloody, brutal man, a throat-cut pirate with slaves, but that had not so much to do with European superiority as with the fact that that was how things were in the ocean: one day you made a fortune, the next day you were someone else’s fortune. And for all his bad luck, he never lost his ability to look at others, or the Other, with humanity and respect, carefully detailing their rituals and dresses and foods and manners with a wondrous gaze. At the same it’s quite critical of the expansion of the Portuguese Empire, built on war and rapacity.
And it also reads like a great thriller, or adventure novel, or picaresque novel. There are pillaging of native villages, pirate pursuits, violent shipwrecks, and the protagonist wanders around in rags in China where he’s captured and treated with much curiosity.
Finally it’s a great autobiography; perhaps it’s even the first great autobiography of an anti-hero; Mendes Pinto doesn’t mince words about his taste for plunder, slaves, money and power, and is quite graphic on the means he achieved his goals. At the same time he’s quite critical of himself and the final pages sees himself seeking atonement in the Company of Jesus, after meeting its founder, St. Francis Xavier. It was a crazy life. After two decades in Asia he returned to Portugal, secluded himself in a farm and wrote his memoirs between 1569 and 1578, although they were only published in 1614, after receiving the Inquisition’s approval. When it came out, it was so fantastic people thought he had made it all up and for a long time he was considered a liar, at worst, or at best a great fabulist. But it was a bestseller and endures as a great work of literature.
You want more praise? Brazilian novelist Guimarães Rosa vouches for it. Speaking of his “passion for ancient Portuguese authors,” the wordsmith and polyglot once declared in an interview that he pinched archaic vocabulary from Mendes Pinto for his famous novel, The Devil to Pay in the Backlands.
The book is translated and edited by Rebecca D. Catz, an expert on Mendes Pinto. The book was translated as The Peregrination in the ‘90s, but that edition only has 450 pages; the new one has over 700 and is in the hands of a person who has been studying the author for decades now. Everyone should rush to buy it because it’s one of the literary events of 2014. - storberose.blogspot.com/
Labels: Fernão Mendes Pinto