Ludvig Holberg - Fantastic adventures at the center of the earth await a penniless Norwegian student after he plunges into a bottomless hole in a cave. Niels Klim discovers worlds within our own—exotic civilizations and fabulous creatures scattered across the underside of the earth's crust and, at the earth's center, a small, inhabited planet orbiting around a miniature sun 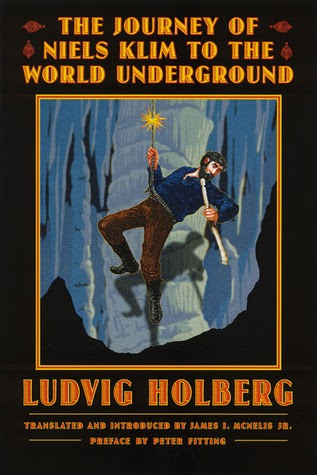 First published in Latin as Nicolai Klimii iter subterraneum (1741) by the Norwegian-Danish author Baron Ludvig Holberg (1684-1754), this deluxe edition has a Danish translation by the poet Jens Baggesen (1764-1826). The volume is illustrated with etchings by the Danish Royal engraver Johan Frederik Clemens (1749-1831) after drawing by Nicolai Abraham Abildgaard (1743-1809). Originally, Holberg went to Germany to have the book published, fearing religious objections in Denmark. The satirical nature of the novel pushes the eighteenth-century boundaries of sexual equality and social morality. The book was, in the end, a tremendous success—“the Danish Gulliver’s Travels”—and Holberg named the “Molière of the North.”
Holberg’s novel describes a utopian society discovered by Niels Klim when he accidentally fell into a hole in the earth’s crust. He finds an underworld where trees are alive and the rules are different. Nicknamed “overhasty” because he moved so much faster than the trees, he becames the King’s messenger and visited twenty-seven different provinces, not unlike Swift’s Gulliver.