Hadrien Laroche - The first, orphaned by history, still mourns a father who was sent to a Nazi concentration camp, never to return. The second, orphaned by pathology, has a rare disease, and is facing madness alone in a mountain chalet. The third, orphaned by philosophy, is a teenager who has decided to cut all ties with his parents 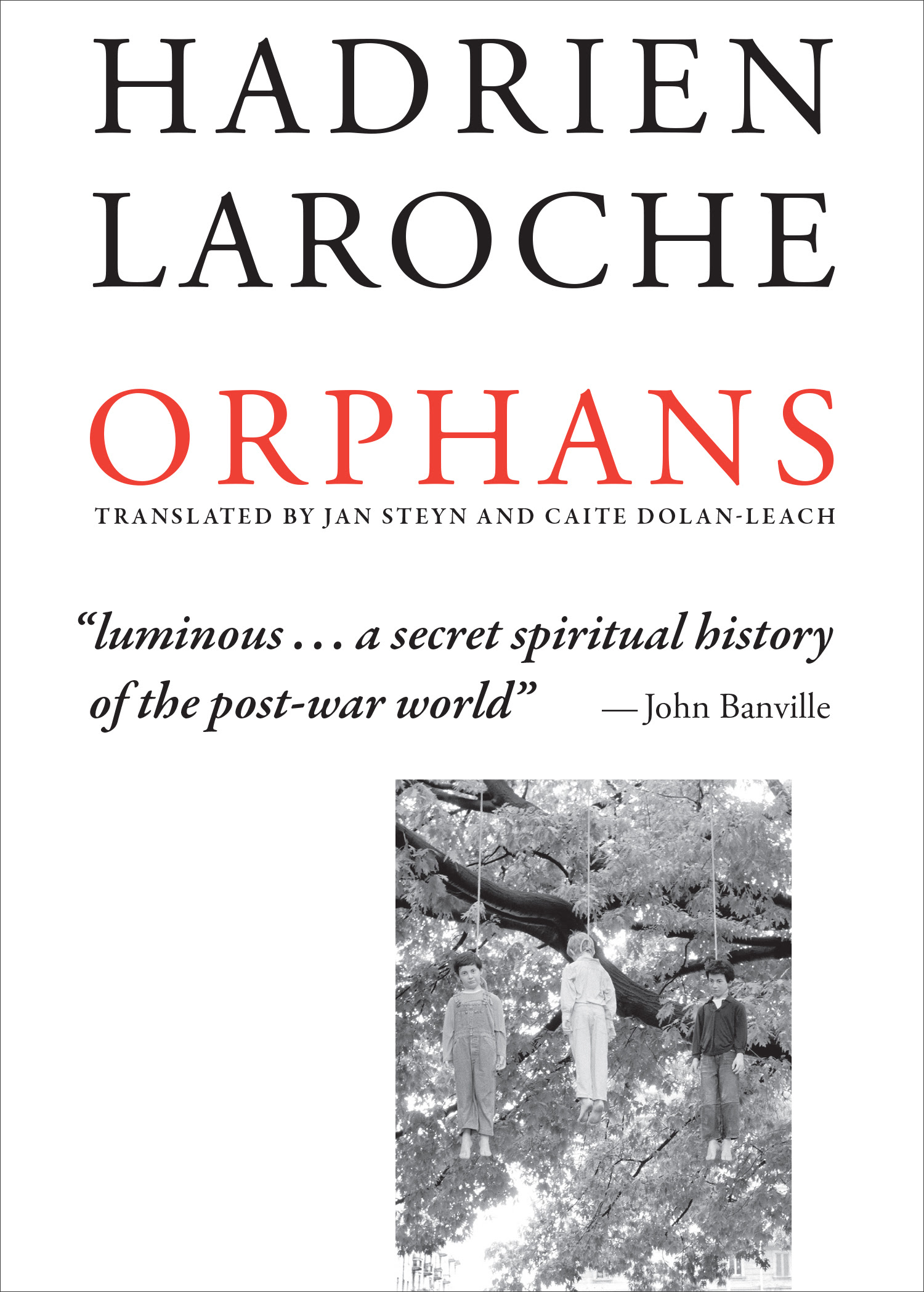 A forlorn traveler is taken in by three suffering orphans, who, in the midst of their pain, give him food and shelter. The first, orphaned by history, still mourns a father who was sent to a Nazi concentration camp, never to return. The second, orphaned by pathology, has a rare disease, and is facing madness alone in a mountain chalet. The third, orphaned by philosophy, is a teenager who has decided to cut all ties with his parents.
Never one to avoid challenging questions, in this poignant triptych Laroche examines the relationship between a writer and his words: suggesting that, perhaps, he is the orphan of his own work.

“Hadrien Laroche is one of the most talented and original thinkers of his generation.” — Jacques Derrida

“An original and challenging short novel, structured in three stories, subtly and enigmatically connected and providing a high literary quality to the excellent narrative.”— Norman Manéa

During the last eighteen years of his life (1968-86), Jean Genet was preoccupied with the struggles of the disenfranchised and displaced: among them, the Black Panthers, the Baader-Meinhof, and the Palestinians. Hadrien Laroche's book is a careful philosophical and historical reading (though fascinating as a political thriller) of the acts and thoughts of various international political movements in the seventies and the eighties, and of Genet's own experiences and writings. It describes the adventures of a writer engaged with the "real world," as opposed to what Genet called "the grammatical world."
This translation of Le dernier Genet (Seuil) considers Genet's insights, failures, and critique of humanism, and examines the way in which his energetic prose forged a new political, aesthetic, and philosophical relation between literature and the world.
The Last Genet focuses on a critical moment in western culture, but also, on a broader scale, questions of borders, language, and identity, offering an alternative to Sartre's concept of engagement.
The original edition was nominated for France's prestigious Prix Femina as best essay, and the book has been praised by Elisabeth Roudinesco, Bernard-Henri Levy, Albert Dichy, and others.

"A beautiful book, painting the dark side of Jean Genet: those moments that are the most fascinating about a writer."—Bernard-Henri Levy

"This is a magnificent book that gives us the metamorphoses of the last Genet, the poet of the jouissance of evil saved from abjection by his sacred relation with the language of the sublime."
—Elisabeth Roudinesco

"Genet's last journey, as revealed by Laroche, is imbued with beauty, metamorphosis and emancipation on one hand, and monstrosity, nihilism and hopelessness on the other. An indispensible study for readers interested in Genet, the Black Panthers, the Palestinian/Israeli conflict or, more generally, the philosophy of humanism."—Kirkus Reviews

"Laroche's exhaustive research provides a historical framework for examining Jean Genet's later non-fiction work, particularly Prisoner of Love, and the ways in which his political ideals and experiences shaped his worldview."—Publishers Weekly

Hadrien Laroche's eloquent, evocative meditation on mid-20th-century French writer Jean Genet focuses on the last and surprising phase of the life of an author remembered as a scandal-causing gay novelist, experimental playwright and defender of the oppressed. Laroche, a novelist himself, and former cultural attaché at the French consulate in Vancouver, first published The Last Genet in 1997 as part of his graduate studies with philosopher Jacques Derrida. Now, suitably updated, ably translated by David Homel, Laroche's book serves as a timely homage that marks the centenary of Genet's birth on Dec. 19, 1910.
Outside select literary circles, Genet is today an almost-forgotten writer, so it's probably appropriate not only to consider the "last Genet," but also to recall the story of the "first Genet." One of the most remarkable encounters in modern French literary history occurred during the Second World War, in Nazi-occupied Paris. An unknown writer in his early 30s, Genet was brought before celebrated French writer and filmmaker Jean Cocteau.
A witness to the meeting, a visiting painter, described Genet as a "curious character, half convict, half bantamweight boxer." The "curious character" with manuscript in hand could also be described as an orphan, petty thief, homosexual, occasional prostitute and homeless vagabond, recently released from his latest stint in prison.
Genet said to Cocteau, "Master, I'd like to read you passages from my manuscript." For the next hour or so, Genet, standing, read extracts from Our Lady of the Flowers. If Genet read like a man "unveiling a masterpiece," as the visiting painter noted, it was for good reason. Written in prison, inspired by masturbatory fantasy, erotically glorifying society's outcasts and transgressing the rules of conventional fiction, Our Lady was unlike any novel of its time.
At first, Cocteau resisted. "I don't much like all these stories of drag and queens," he said after Genet had left. But he knew he was wrong, and sent for the manuscript. That night, Cocteau wrote in his journal: "Jean Genet brought me his novel. Three hundred incredible pages in which he pieces together the mythology of 'queers.' " And a few days later: "The book is here, in the apartment, extraordinary, obscure, unpublishable, inevitable. … For me, it's the great event of the epoch. It disgusts me, repels me, astonishes me. … I've reread Our Lady of the Flowers line by line. … Here, there's the solitude and the shimmering of a black star."
As it turned out, Our Lady of the Flowers, backed by Cocteau, was not unpublishable. Seemingly overnight, in the years immediately after the war, Genet burst upon the literary firmament as a fully accomplished writer of novels, poems and even a couple of one-act plays. He was the subject of Saint-Genet: Actor and Martyr, a book-length "existential psychoanalysis" by philosopher Jean-Paul Sartre.
Then the peripatetic Genet more or less disappeared from the Parisian scene, often travelling in North Africa, where he pursued various long-standing amatory affairs. It wasn't until the mid-1950s that his literary sabbatical ended and the "middle Genet" emerged as a successful playwright. He was part of a "new wave" of French-language dramatists and filmmakers that included Samuel Beckett and Jean-Luc Godard.
Though Genet's plays, such as The Balcony and The Blacks, continued to be performed to acclaim, he pretty much stopped writing by the 1960s. This time, the silence appeared to be permanent. Apart from the occasional newspaper piece or rare interview, usually in support of some political cause, he was seldom heard from. Genet was seen in the United States speaking in defence of the Black Panthers; he peered into the embattled Sorbonne during the student revolt of 1968; he wrote about Germany's Red Army Faction, and he travelled in Jordan and Lebanon, living among Palestinian refugees. But in the quarter-century until his death from throat cancer in 1986, he published no books.
As Edmund White remarks in his 1993 biography, Genet, "When Jean Genet died in 1986, many people … were surprised to discover he hadn't died years before. … the astonishment mounted when a few months after his death a long posthumous work, Prisoner of Love, was published."
The book was a collage of vignettes, both romantic and self-doubting, recalling Genet's experience of living with the Palestinians, especially in the camps of the Palestine Liberation Organization's guerrilla fighters. Though Prisoner of Love is politically supportive of his young militant hosts, it is neither ideological nor propagandistic; though its portrait of men and landscapes is sensuous, its eroticism is chaste. White adds, "It was unlike anything Genet had written before and few people had even suspected he remained capable in his 70s of such a sustained effort."
This is the "last Genet" whose meandering itinerary on the side of political outcasts Hadrien Laroche takes up. Laroche writes in the tradition of the French essay, at once lyrical and densely analytic. It's a line of thought that runs from Montaigne through Camus and all the way up to Derrida. Laroche meditates on the images of the era (including that emblematic triumvirate of sex, drugs and rock 'n' roll), the oscillations of politics and violence, and on the last years of the paradoxical Genet, rebel and humanist.
Genet's life, early and late, is eerily reminiscent of that of his 19th-century predecessor, boy-poet Arthur Rimbaud, who ceased writing at 19 and went off to Africa to work as a commercial trader until his premature death, turning his back on literature forever. Genet, too, stopped writing and went off to metaphoric and literal deserts, but in his case, unlike Rimbaud's absolute silence, there was a final, magical literary work as Genet returned for a last time to the "grammatical" or literary world, to give an account of the "real" one. If Laroche's reflection on the "last Genet" does no more than return us to the "first Genet," it will have served its purpose. - Stan Persky