Ambroise Paré, born in France around 1510, was chief surgeon to both Charles IX and Henri III. In one of the first attempts to explain birth defects, Paré produced On Monsters and Marvels, an illustrated encyclopedia of curiosities, of monstrous human and animal births, bizarre beasts, and natural phenomena. Janice Pallister's acclaimed English translation offers a glimpse of the natural world as seen by an extraordinary Renaissance natural philosopher. 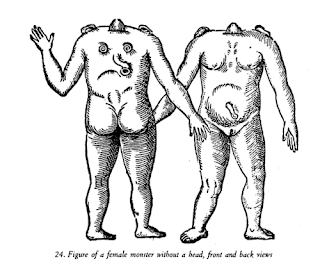 According to French surgeon and writer Ambroise Paré (1573) there are several situations that cause monsters:

The first is the Glory of God.
The second, his Anger.
The third, Excess of Seed.
The fourth, too little Seed.
The fifth, the Imagination.
The sixth, the Narrowness or Smallness of the Womb.
The seventh, the indecent Posture of the Mother during Pregnancy; when she has sat too long with the her Legs crossed, or pressed against her Womb.
The eighth, as a result of a Fall, or Blows struck against the womb of the Mother, being with Child.
The ninth, through hereditary or accidental Illnesses.
The tenth, through rotten or corrupt Seed.
The eleventh, through mixture or mingling of seed.
The twelfth, through the Artifice of wicked Beggars.
The thirteenth, through Demons and Devils.

Paré’s Preface explains that Monsters occur outside the course of Nature; but they may still be signs of an impending misfortune. Examples of monsters are those with supplementary or deficient digits, arms, legs, heads.

Marvels are completely against nature, such as a woman giving birth to a serpent or a dog.

Examples of the maimed are

The blind
The one-eyed
The hump-backed
Those who limp
Those with six digits on the hands or feet (or less than five; or fused)
Those with arms too short
The nose too sunken or flat-nosed
Those with thick or inverted lips
Girls with closed genitals or excessive flesh
Hermaphrodites
People bearing spots, warts, or wens

… Or any other thing that is against Nature …