The Force of What's Possible: Writers on Accessibility & The Avant-Garde - Is there any avant-garde? What’s at stake when 100 writers think through issues of accessibility and audience? This is a book comprised of answers—to these questions and their offspring—as various and contradictory as its contributors 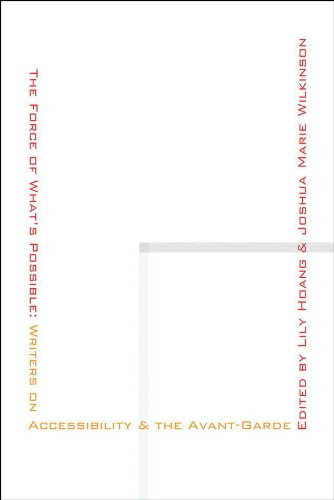 
Is there any avant-garde? What’s at stake when 100 writers think through issues of accessibility and audience? This is a book comprised of answers—to these questions and their offspring—as various and contradictory as its contributors, ranging from Eileen Myles, Lyn Hejinian, and Joyelle McSweeney to Blake Butler, Jenny Boully, and Rikki Ducornet, among dozens of others. The results here provide discrepant engagements on the most pressing questions of the literary, the political, and the force of what's possible for writers in the 21st Century.

Starting in Summer 2012, I sent out roughly 200 invitations to a slew of poets to contribute to an anthology on the avant-garde, empire, and accessibility. Soon after, I invited Lily Hoang to co-edit a second volume on the same topics from the prose perspective. This was the solicitation we sent out:


In a recent article in The Boston Review, Marjorie Perloff argues that “by definition, an ‘avant-garde mandate’ is one that defies the status quo and hence cannot incorporate it.”1
For Alain Badiou, in his final thesis on contemporary art, “It is better to do nothing than to contribute to the invention of formal ways of rendering visible that which Empire already recognizes as existent.”2
With these two claims in mind, I am writing to ask you to contribute a short piece on what you believe to be elemental about your work as a writer:


Originally conceived of as a double-volume—one on poetics, one on prose—The Force of What’s Possible: Writers on the Avant-Garde and Accessibility (to be released this month with Nightboat Books) emerged as a single concentrated edition. For the next three months on The Volta, we’ll feature responses to these questions by a range of writers.


Dan Beachy-Quick | As In the Green Trees |


Brian Blanchfield | Freely Espousing: or Subject, to the Avant-Garde |


Jaswinder Bolina | A View from the Factory Floor |


Amaranth Borsuk | Towards an Auto-Destructive Poetics |


Susan Briante | Towards a Poetics of the Dow |


Laynie Browne | Rendering the Invisible: A Translucent Imperative of Poetry |


Julie Carr | In Defense of My Experience (Or, The Body and the Avant-Garde) |


Ken Chen | From The Excerpts: Poetics or or Politics |


Jeffrey DeShell | Notes Toward a Defense of Experimental Writing |


Amber DiPietra, Jen Hofer, & Denise Leto | as rigorous as a mathematical demonstration, as surprising as


an ambush in the night, and as elevated as a star: Some Thoughts on Access, Difficulty, Limestone, and Empire


Brian Evenson | The Crazy Party Guy, or, A Disruption of Smooth Surfaces


Yona Harvey | The Poetics of Self-Education


Lyn Hejinian | Sun on the Avant-Garde


Christopher Higgs | A Manifesto Needs Who?


Paul Hoover | The Question of the Avant-Garde


Gregory Howard | Always the Next Machine


Laird Hunt | Some Notes on the Tyrannical Prehension


Alta Ifland | I am My Own Status Quo


Kevin Killian | “I Can’t See You Any More, Baby”: Accessibility, the Avant-Garde and My Flick Knife


Ann Lauterbach | In Praise of The Various


Hank Lazer | Why I Write and What’s at Stake


Timothy Liu | Why We Do That Thing That We Do


Robert Lopez | The Good Thing about Today is I Slept through Most of It, or the Illusion of Urgency


Jill Magi | “Nothing Is Wrong: Thirteen Thoughts on Poets and Poetry in the Year 2013”


Ravi Mangla | On the Merits of Moderation


Farid Matuk | Poems of the Near Mind


Mark McMorris | Where This Thing Is Going


Joyelle McSweeney | The Golden Age of Obliteration, or Staphylococcus aureus, or,


How the Artist Must be Accessible to Art


Kyle Minor | Once Upon a Time (or, The Trouble with Avant-Garde Ought-Nots)


Ander Monson | Another Project for the Heart


Laura Mullen | Accidental Cliques? (Or, uhm, which status quo I was supposed to defy, again?)


Kristine Ong Muslim | On Writing, Accessibility, and the Avant-Garde


Vanessa Place | Refusal: The Confession of a Real Pervert


Joanna Ruocco | Living with Language: Our Body of Need


David Shields | Negotiating against Myself


Cole Swensen | On the Brink of a Response


Lynne Tillman | Breaking What is Broken


Steve Tomasula | I Only / Never I


Tyrone Williams | Reginald and Me


in the First Degree


Ronaldo V. WIlson | Living Being: After the Avant-Garde


Lidia Yuknavitch | Why Do you Write it All Weird?