Emmett Williams - exploring the possibilities and limitations of the word ‘sweethearts’ using an eleven-by-eleven grid (the number of letters in the word itself). The book is deliberately typeset backward, opening from left to right, accentuating the fact that it can be read as a flip book 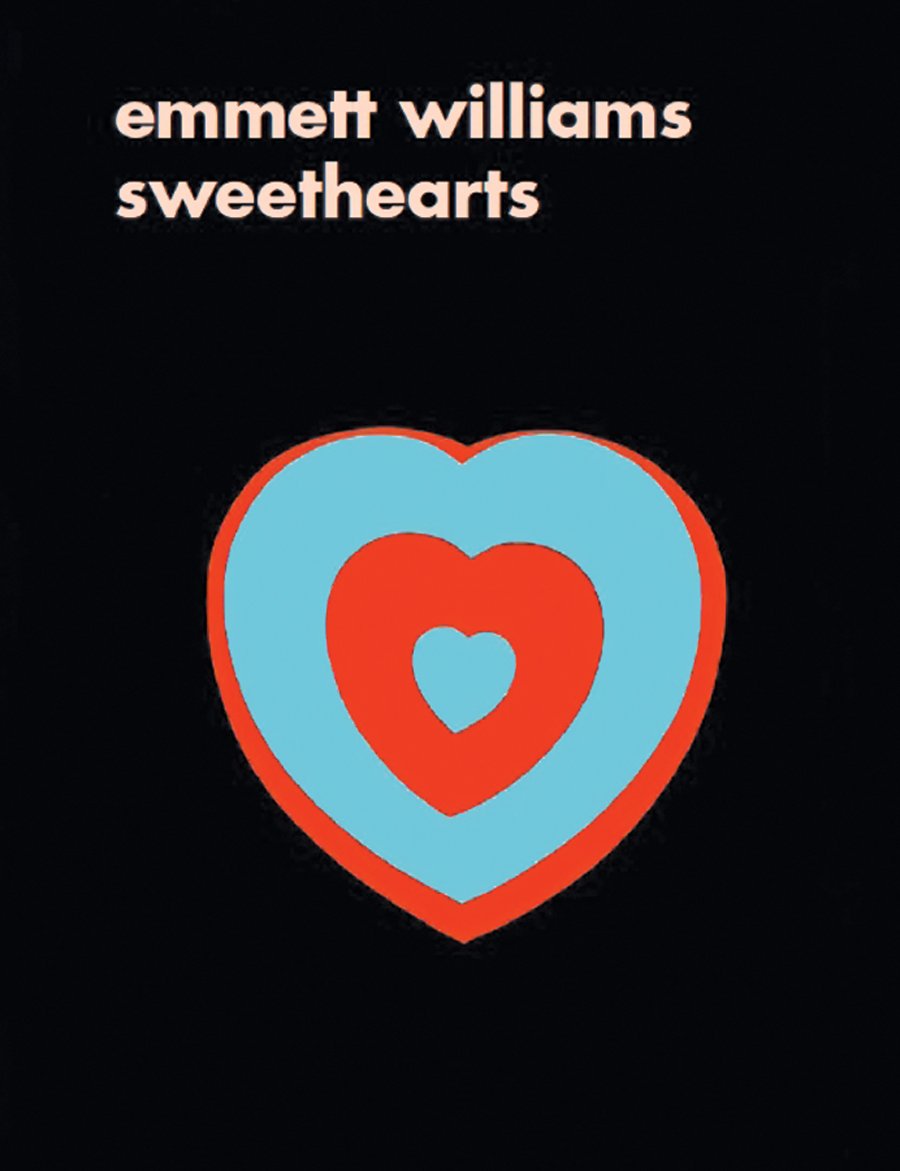 A founding member of Fluxus and the concrete poetry movement, Emmett Williams (1925-2007) made several performances and poems that stand today as defining gems of those genres. Among them is the book-length concrete poem Sweethearts, first published by Something Else Press (where Williams was editor in chief) in 1968, and back in print for the first time, still sporting its classic cover by Marcel Duchamp. Sweethearts is an anagrammatic erotic encounter between a "he" and a "she," whose entire vocabulary is derived from the word "sweethearts." The letters maintain the same spacing in every word on each page, lending the volume a flipbook dimension that Williams enhances by organizing the text to read backwards, so that the reader can flip the book with her or his left hand (thus the front cover is on the back, and vice versa). Richard Hamilton described Sweethearts as being "to concrete poetry as Wuthering Heights is to the English novel... compelling in its emotional scope, readable, a sweetly heartfelt, jokey, crying, laughing, tender expression of love."

Emmett Williams’s Sweethearts (1967), in which the title word is subject to sequential typographic variations that, as you turn its pages in Hebraic sequence, evoke a heterosexual relationship, introducing the possibility, still scarcely explored, of writing visual fiction with minimal verbal material. (A shorter fiction on the same theme is Norman H. Pritchard’s brilliant “Hoom” [1970], published in Ishmael Reed’s 19 Necromancers from Now (1970). Here two-page spreads filled entirely with “sh” are punctuated by a progressively increasing number of spreads with other kind of wordless typographical arrangements.) - Richard Kostelanetz 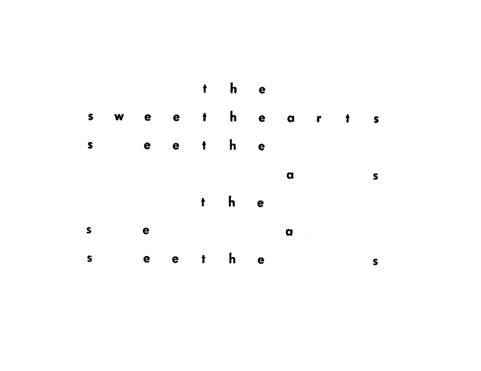 I love this book! Emmett Williams takes a very basic building block (the letters in the word "sweethearts") and uses them to tell the tale of a romance in progress. It's a very smart book that will open your eyes to new possibilities in narrative.

Please note: This book is for people who are open-minded about literature. Not for someone who's looking for a typical sort of reading experience. - Tim Callan @ amazon.com The white cover edition of Williams’ iconic and intimate artists’ books exploring the possibilities and limitations of the word ‘sweethearts’ using an eleven-by-eleven grid (the number of letters in the word itself). The book is deliberately typeset backward, opening from left to right, accentuating the fact that it can be read as a flip book. Through the arrangement, addition, and omission of letterforms all set in the font Futura, Williams creates one of the most timeless and cinematic pieces of concrete poetry of the1960’s. Published a year before the Something Else Press edition in 1968.

at April 07, 2021
Email ThisBlogThis!Share to TwitterShare to FacebookShare to Pinterest