Paavo Matsin tells the parable of a small nation, whose gigantic neighbor quite literally consigns its literature to the latrine, only for it to rise from the dead in a literarily spectacular apocalypse in the best traditions of Bulgakov and magic realism 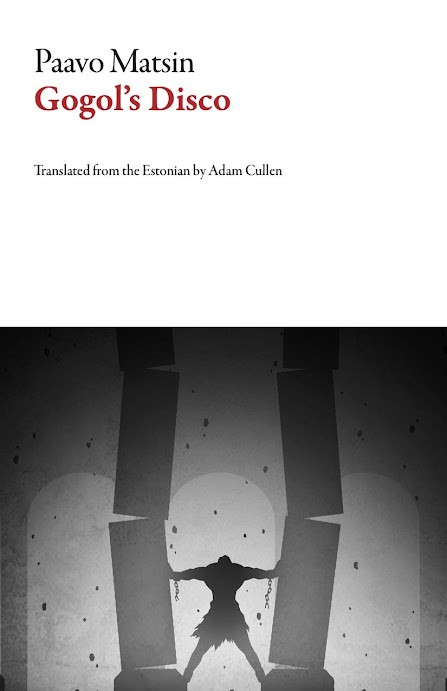 In a parallel or future Estonia, whose language has been outlawed and its native population deported after the invasion by the Russian Tsardom, Nikolai Vasilievich Gogol is resurrected, Christ-like, bringing phantasmagoric mayhem to the sleepy town of Viljandi.

By the end of the story, four evangelists will have emerged from the novel’s ragtag cast of Russian- speaking beatniks, bohemians, booksellers, blaggers, and Beatles- maniacs to write their subversive Gogol Gospels in the local insane asylum, despite efforts to thwart them on the part of the mysterious Murka, heroine of a criminal underworld ballad and agent of the Tsardom’s secret police. By turns exuberant, grotesque, erudite, oneiric, hilarious, mystical, psychedelic, and dystopian, Gogol’s Disco tells the parable of a small nation, whose gigantic neighbor quite literally consigns its literature to the latrine, only for it to rise from the dead in a literarily spectacular apocalypse in the best traditions of Bulgakov and magic realism.

Paavo Matsin (b 1970) is a lecturer and critic whose literary activity began in the experimental group “14NÜ”, which focused on expanding the possibilities of literary form: starting with the unusual design and topics of the books that the members published, and including colourful book releases that can be best classified as performances. Matsin’s “solo career” has likewise been characterised by experimentalism and a playful approach. When his first work was published in 2011 – Doktor Schwarz. Alkeemia 12 võtit (Doctor Schwarz. The Twelve Keys to Alchemy) – it was seen as his first attempt to unite two extremes: an experimental writing style with traditional storytelling. However, it turned out that the former overshadowed the latter, and so Matsin’s debut received a mixture of enthralled and sceptical reactions. His Sinine kaardivägi (The Blue Guard, 2013), an adventure tale set in Riga, proved that Matsin is more than a gleeful eccentric. In his third novel, Gogol’s Disco, the author achieves a perfect balance between literary games and skilled storytelling.

Gogol’s Disco is undoubtedly Matsin’s strongest work to date. His characteristically cryptic, erratic plot and intertextuality, which can be difficult for the common reader, has receded, though it hasn’t completely disappeared! The strengths of Matsin’s energetic inner world are amplified in Gogol’s Disco: a bizarre, dream-like atmosphere populated with colourful characters and absurd situations. Absorbing influences from history, alchemy, mysticism, and literature, Matsin here offers a clearer text, while not losing his ability to create a magical and grotesque world: one which won’t submit to classification by genre.

Gogol’s Disco is set in a near-future (or a parallel existence) in which Imperial Russia has put an end to Estonian independence, and Estonians have become a tiny minority in their own homeland. Yet the work does not focus on national apocalypse, but rather on how the Russian literary classic Nikolai Gogol (who has risen from the dead) goes to visit the pastoral town of Viljandi in southern Estonia, where he brings local intellectualism to a boil and, in some instances, flips it upsidedown. It should be noted that Gogol – in whom the author has added elements from Jesus, Woland and even the Golem – is not the work’s main character. On centre-stage are Viljandi’s harlequin community of mainly Russian-speaking intellectuals and miscreants, whose already odd lives intersect with that of the parablespeaking Golem-Gogol and are changed forever. For lack of a better description, Gogol’s Disco can be called a romping dystopia or an allegorical grotesque. A book which is both anti-utopian and its parody. In any case, Matsin’s spiralling fantasy leaves most Estonian science fiction writers standing flat-footed. A clear added gem in Gogol’s Disco is Matsin’s rendering of Viljandi, a town nestled in the hills of southern Estonia, which is blessed with views that resemble Norway much more than Estonia. Matsin makes the town both a modern and backwater place, although his descriptions of certain sites are sources of happy recognition for readers familiar with Viljandi. The authenticity of the book’s social circumstances and its incredible events provide a basis to classify it as magical realism, but the images Matsin conjures are too restless to be limited by such a designation; the sense of liberty bursting from his writing is too strong.

By combining his sense of humour, absurdity and erudition, Matsin has created an original and liberating vision that even offers a moral: even when situations or conditions change drastically, life tends to go on and surprise us. - Janika Kronberg

Paavo Matsin’s Gogol’s Disco is set in the near future, in the provincial Estonian town of Viljandi. Russia – in the form of a resurrected Tsarist empire – has vanquished NATO and retaken the Baltic States, ending their brief period of independence. Tallinn and Tartu have been destroyed, and most of the Estonian population has been deported. The opening chapters of the novel introduce us to the main characters, a motley, comical assortment of petty rogues, mostly Russians who have recently settled in Viljandi, some of them based on real-life characters.

Konstantin Opiatovich the pickpocket had certain unfailing daily habits which he had acquired over many years spent in penal institutions. Every morning he would iron his trousers with a metal mug heated hot for the purpose and clean his shoes with a small, threadbare satin cloth which he always carried on his person, then he would fill his pockets with plenty of the bread crusts which he dried out on his windowsill. Having done that, he would normally take an early tram all the way to the final stop. Then he would step carefully from the asphalt road onto the narrow flagstone path, trying to avoid the puddles, and set course contentedly for the old Jewish cemetery. Jewish people were known for their resoluteness and respect for tradition, and they abided by many ancient laws, so the shaded cemetery was just the right place for this honourable pickpocket to begin his day. His former cellmate, an Odessa Jew, had told him a thing or two of interest about the secret customs of this oppressed national minority. He couldn’t remember all of it now, but this fairy-tale world, with its miniature gate intended only for the rabbi, and the little piles of stones heaped up on the gravestones in place of flowers, somehow had a restorative effect on Opiatovich as he prepared for the day’s work ahead. Later, after a whole day spent on the tram, it would have been too risky to travel back to the final station just for the sake of having a walk. During the day, when he was tired of the rowdy company and of groping in people’s handbags, Opiatovich would normally relax by strolling between the tram stops and feeding the pigeons with the bread crusts. But here, in this kingdom of silent stones and Hebrew texts, where there was not a single other person, he could prepare himself for the hustle and bustle to come. Guided by his inner feelings he would stop by one of the gravestones and place a pebble which he had picked up earlier onto the dewy stone surface. In that way Opiatovich practised a specific skill which was vital for pickpockets, namely digital dexterity. As he did this he would listen to the silence, and to his inner voice. But when he picked the stones up from the ground he was sure to never break the ancient thieves’ rule, which he knew all too well by now: even the most sentimental thief should never lift anything heavier than a purse.

at April 20, 2021
Email ThisBlogThis!Share to TwitterShare to FacebookShare to Pinterest