Antonio Porta - a post apocalyptic novel set shortly after the collapse of the Italian/Western economy. A collapse initially triggered by German 1920s style hyper-inflation. It takes the form of a found journal left behind by the elderly narrator 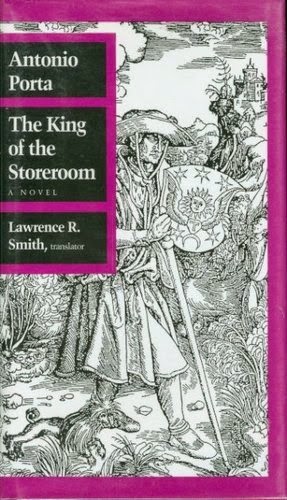 Antonio Porta, The King of the Storeroom, Trans. by Lawrence R. Smith. Wesleyan, 1992.

With this experimental, futuristic novella about a violent postcapitalist society, the late Italian author (he died in 1989) reveals himself to be a daring, brilliant craftsman. Porta's haunting images of the apocalypse are anchored by a discontinuous but tautly integrated narrative, which purports to be a series of journal entries by a dying intellectual. In an anguished howl, achieved by combining narrative, poetry, newspaper clippings and scraps from scientific texts, the narrator bears witness to the demise of modern social and political institutions. The setting is Italy in an unspecified future, when the economy has collapsed and anarchy begins; the government interns people in labor camps; organized religion dies; starvation is endemic; cannibalism occurs; mass suicide and random executions proliferate as the natural order breaks down. Yet the narrator's last words suggest a future redeemed: he describes a world returned to a preindustrial state, the ecology of the countryside miraculously revived, "the notes of the blackbirds. . . announce the dawn." Porta was best known in his native country as a poet and editor of the journal Alfabeta ; this is the first of his works to be issued here.- Publishers Weekly

The King of the Storeroom purports to be a manuscript found in a small storeroom, transcribed by an anonymous figure who offers only some brief 'Preliminary Remarks' about it (but whose presence at least suggests the possibilities of a future in a world that has come to near an end, as the manuscript itself reveals).
The manuscript takes the form of a diary, and covers a mere thirty-two days. The author uses it less to keep track of what is happening than to hold on to what remnants of civilisation he can; he see's this exercise as almost a necessity for his mental well-being:
I don't want to end up like all the ones I meet who are no longer capable of words, having short-circuited, as they say, the symbolic system of our species and being forced to use violent gestures and barks, which negate the desire to communicate implicit even in howling.
And he also hopes to use his writing, by reading it aloud to others like him (apparently there still are some), hoping to get a potato or turnip in return.
The catastrophe that has killed so many and ruined civilisation as we know it is left relatively vague, but it was clearly very much a collapse of civilisation, a snowballing effect where the failure of small parts led to the complete breakdown of everything. Environmental catastrophe is part of it -- the destruction of nature by humans, such as the Lambro River, "turned into that mush called 'liquid waste'" ("in spite of declarations which appeared daily in the 'press'") -- but far more significant is how removed mankind has become from the fundamental tasks that connect it to life:
The increasing gap between doing things (knowing how to do them, even knowing how to use your hands !) and saying them became unbridgeable.
The consequences are far-reaching;
If we didn't all die of hunger right away, or within a few months, we owe it to a race of bumpkins, like the farmers, who keep getting older and older, and yet there is no one to step in and take their place.        The narrator is no better, frustrated at being able to do little more than write and scrounge for food, but also unable to move beyond that. So much for man the maker:
Homo faber. I'm no Robinson Crusoe. I'm not building any kind of future. If I find abandoned utensils, I pick them up, look at them and then throw them aside.
Besides his diary-entries he also writes letters -- rewriting old letters he wrote to his children but never sent. Now there's little chance of sending them (though he has some ideas for: "a new kind of postal system: casual, full of suspense", where letters get carried along by whoever picks them up), but it's another form of exercise (and a re-examination of the past). In the form of poems, these are some of the strongest parts of the books, Porta-the-poet strutting his stuff -- though it's a carefully written book throughout.
Far from the direct and very explicit apocalyptic fiction one usually finds, The King of the Storeroom is almost too elliptical. Yet the account, brief and limited though it is, sounds convincingly authentic -- and even what specific critiques there are (against some manifestations of capitalism, for example) have aged well in this almost vague presentation.
An interesting curiosity, and some fine expressive writing.- The Complete Review

Antonio Porta's The King of the Storeroom (originally in Italian as: Il re del magazzino - 1992 translation by Lawrence R. Smith) is a post apocalyptic novel set shortly after the collapse of the Italian (and presumably other Western) economy.  A collapse initially triggered by German 1920s style hyper-inflation.  It takes the form of a found journal left behind by the elderly narrator.
Antonio Porta  (from Guernica Additons)
(1935-1989) was born (as Leo Paolazzi) in Vicenza. He was recognized as one of the most important Italian writers of his generation. He was one of the founders in 1961 of I Novissimi, a group of avant-garde poets who were instrumental in the development of a new poetics in postwar Italy. The author of numerous poetry books, as well as fiction, he won all of Italy's top prizes.
Groupo 63, which he helped found was an anti-materialist, anti-capitalist movement that was very influential in post-war Italy until it broke up over differences in how to respond to the student riots that swept through Europe in the late 1960s.
The English language publisher's blurb does a reasonable job of summing up what the novel is trying to do:

Porta's haunting images of the apocalypse are anchored by a discontinuous but tautly integrated narrative, which purports to be a series of journal entries by a dying intellectual. In an anguished howl, achieved by combining narrative, poetry, newspaper clippings and scraps from scientific texts, the narrator bears witness to the demise of modern social and political institutions. The setting is Italy in an unspecified future, when the economy has collapsed and anarchy begins; the government interns people in labor camps; organized religion dies; starvation is endemic; cannibalism occurs; mass suicide and random executions proliferate as the natural order breaks down.
The entire story is far more chaotic than this.  The narrator comes across more as a fuzzy-headed old man who manages to totter to the  banks of the Lambro River, finds a little storehouse, and sits down to write of his experiences.   The journal entries are recorded over a months time.  It is very disjointed, and it is very hard to understand where the narrator is trying to take us.  Much of the early portion has the narrator blaming the failings of capitalism for the economic collapse.  It is only latter, that he also shows that the revolutionary communists expectations are not any better.  That the turn to communism is a turn to becoming a slave to a different master.  He also makes a trip to a small settlement, that had tried to remove themselves from the commercial world and had found that it too had collapsed.
The continuation of the blurb above implies a happy ending, a more peaceful society.  They publishers seem to be confusing the narrators acceptance and peace with  his personal end, with a peace within society.  In fact the very last descriptive lines of this post-capitalist society are:
Now the survivors...are living happily as slave (of whom? everyone of course!) in order to eat beans. Like the old peasants, they are slaves to the land that starves them, in a new and different way each day.  Meat when you can find it: dogs, cats, and mice.  But they're very hard to find. If they are found, they're chopped up and thrown into the pot of cooking beans, then fished out.  Theses slaves of everyone know exactly where the gods favor new cultivation -  and they are competent hog-raisers. You need to establish yourself where the grass can be cut five times a year, on the wedges of the [River] Po's flood plain, and along the riverbanks, as always.  The gods, in fact, live in your stomach.
I suppose the author could have thought that the best that humans could achieve would be a return to pig farming.  But such an outcome would have to be viewed as  at least ironic (in a sense of the contrast of ideals to reality), and particularly ironic from one who made his living within the arts.
Did I enjoy the book?  I am ambivalent.  The language is very disjointed, harsh, and even crude at times.  It is possible that this may be the result of a very literal translation of the original versus are more poetic interpretation.  Or possibly, that is exactly the tone that the original had.  There are a number of poetic asides, that I can make absolutely no sense of.
On the plus side, it is a fast read.  So while there is some confusion as to where this story, this narration, is supposed to be going, it is resolved quickly enough.  It also makes fairly good use of an unreliable narrator.  It is fairly obvious that he is losing coherence, and is not always to be trusted: particularly with regards to the occasional reference to goings-on in the present.
There are also occasional flashes of insight that could come straight from today's headlines:
I'll start this with a note on young people (the last one/ don't bet on it}. They proclaim everywhere  - through all the media...that "they " had rejected the logic of sacrifice, "hence the [attacks] against austerity measures, etc.
That could apply to a lot of our protesotors today: Tea-partiers worried about their social security, Occupiers worried about their college loans, Greeks worried about...everything.
Over all I guess I would lean slightly toward a positive assessment:  I mean after all, how many afternoons can you spend reading post-apocalyptic novels, and be able to tell your friends and impressionable associates that you are reading Italian avant garde literature - two birds - one stone.  My new blog byline - "Welcome to Reflexiones Finales - reviewer of apocalyptic fiction and Italian avent garde literature".
We will zip through our descriptive catagories, Realism and Readability, 1 to 7 with 7 being highest.
Realism is always a little tough with the "found manuscript" approach.  It allows in the unreliable narator (intentional or otherwise), and tends to take away some of the immediacy of the situation.  Before we even get to the first line of the journal, we know our narator is dead.  On the plus side, the author is obvioulsy basing a lot of what happens in the novel on his personal experiences of strife and discord in Europe.  He has attempts at labor camps, that fall apart, and a  novel that ends up with the survivors making due as pig farmers can't really be accused of being a cozy.   For all its oddness, I will say that it is slightly above our mid-point at a 5.
Readablity is a bit conflicting.  It is a short,  fast read.  But whether it is the translation, or the original document, it is a very disjointed read.  I suspect there are sub-themes working through the novel that I lost in all the confusion.  I will say that it is a literary 3. - reflexionesfinales.blogspot.com/2012/06/king-of-storeroom-review.html
at January 12, 2015
Email ThisBlogThis!Share to TwitterShare to FacebookShare to Pinterest
Labels: Antonio Porta