Marek Bieńczyk - These lovely pages, in which the essay brushes up against fiction, offer us more than an historical and philosophical study, but a truly existential, and thus novelistic, investigation of transparency 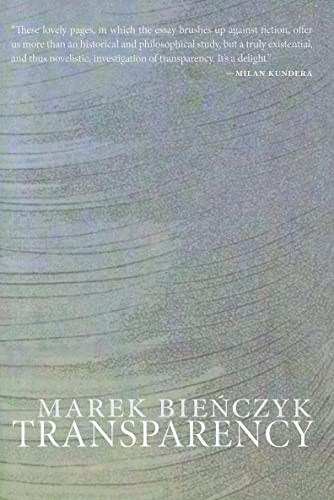 
Milan Kundera on Marek Bienczyk's Transparency: "The subject of transparency has always interested me; in The Art of the Novel I discussed it as one of the key words in my personal lexicon. Marek Bienczyk is right to give it an entire book of its own: transparency remains one of the foundational concepts of today's social imaginary, and its role never ceases to grow. These lovely pages, in which the essay brushes up against fiction, offer us more than an historical and philosophical study, but a truly existential, and thus novelistic, investigation of transparency. It's a delight." Drawing on all his resources as a novelist, cultural critic, and scholar, Marek Bienczyk peels away the layers of our contemporary obsession with "transparency," skipping across centuries and continents to piece together the genesis of our fears of deception and overexposure. Highly poignant, and transcending the genres of criticism, personal essay, and the metaphysical novel, Transparency is a gorgeous revelation -- about our never-ending need for revelation.


For the casual reader of fiction, this blend of novel and essay from Bienczyk (Tworki) will seem anything but. Narrated by a "we" variously encompassing the reader, the narrator's partner, Olga, and Bienczyk himself, it initially examines transparency in political terms, only to branch off into such different avenues as philosophy, history, linguistics, and literature. A brief fictive storyline toward the beginning, "Gabriel and Snow," situates the book as a series of short stories, an impression quickly shattered as the author instead chooses to trawl through such varied cultural touchstones as the Crystal Palace, Edward Hopper, Abbey Road, and McDonald's. In the midst of all this, Jean-Jacques Rousseau becomes a familiar character. Only towards the end does a clear narrative off-handedly resume, as Olga receives her own named section, a place at center stage soon disrupted by that irritating "we". By that point, even Bienczyk feels frustrated by his inconclusive style, while fiction readers will be hungry for more story and philosophically inclined ones yearning to debate him on the many thorny points raised. Bienczyk's obvious linguistic and intellectual prowess intrigues, raises difficult questions, and gifts a brand-new reading list to anyone willing to tackle it. - Publishers Weekly 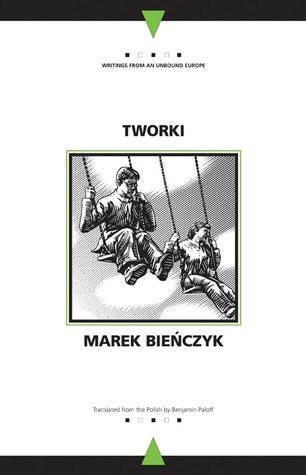 
Sonia is 20 and loves Olek; Jurek is 22 and loves Sonia. Olek is a member of the clandestine resistance movement. Sonia and Jurek work in the administrative offices of a hospital in the outskirts of Warsaw. One day, leaving behind a letter to Jurek, Sonia disappears without warning. Marek Bienczyk's newest novel is set in the German occupation and in the present, and it explores the mystery of Sonia and her letter. (Tworki is the name of a mental institution outside Warsaw.)

In Tworki, a village just southwest of Warsaw, there is a psychiatric hospital and in that hospital, the patients and their caretakers are hidden from the war just outside their iron gates. Our hero, Jurek, answers an ad in the paper for a job there and finds himself keeping the books alongside a knockout strawberry blonde named Sonia. They and their group of friends—vital young people like Marcel, an initial rival for Jurek; Olek, Sonia’s chosen love; and Janka, with whom Jurek becomes involved—do their jobs, picnic on the weekends, and dance in the gardens on the grounds of the hospital.
Jurek speaks often of, and even in, verse, whether he is talking to his friends or in letters to a distant and admiring cousin. He and his friends live lives that defy the discord and destruction of the war in Europe, striving to rediscover or save whatever beauty they can. Much of this beauty is embodied by Sonia, who is beloved of all the friends and patients at the asylum.
But the revitalizing spring they all hope will come for Poland is not to arrive this year. Despite the relative safety of their odd surroundings, the world and the war soon come for the friends. Olek’s absences are longer and unexplained. Marcel is not what he seems, and he and his wife mysteriously disappear, she says, to the gas. And the perfection that Sonia embodies cannot ultimately be kept, by the friends, by the nation, or even by Sonia herself.

(born 1956) – author of fiction and essays, historian of literature, translator from French, PAL Literary Research Institute employee and expert on the literature of Polish romanticism and on contemporary French humanities. His academic debut was a paper entitled The Black Man – Zygmunt Krasiński on Death (1990). He has also published two, to some extent complementary books of essays, Melancholy – On Those Who Never Recover What They’ve Lost (1998) and Dürer’s Eyes – On Romantic Melancholy (2002). For Książka twarzy (Face Book, 2011) he received the NIKE award.
Marek Bieńczyk’s exquisite novels, Terminal (1994) and Tworki, (1999) are not free of “gloomy” subject matter either (the experience of loss, mourning and the pain of parting). Nevertheless, although Bieńczyk is always discussing melancholy, both in his essays and in his novels, he has a very special view of it. This is what Bieńczyk himself says about his major theme: “I am interested in creative melancholy, which is strong and productive, and thus is specifically something that, in causing a deep existential crisis followed by an ideological one too, shatters the simple contrasts of hope and despair, fullness and emptiness, desire and its non-gratification; thus melancholy that is active, so to speak, predatory even, broadening our recognition of life, without locking us in stony despair. This sort of melancholy would be revelatory and dynamic.” The pages of Terminal are steeped in this “dynamic melancholy”; it is a post-modernist romance in which an inevitable, final parting with a lover by no means leads to “stony despair”, but acts as an incentive for creativity. Bieńczyk is attracted to the inexpressible, things that are impossible to put into words. In Terminal he wonders how we can talk about love at all, when everything has already been said about it. When a man who’s in love talks about his feelings, is he just a worthless plagiarist? Is he really declaring love, or is he just uttering the ready-made language and set formulae of his culture? In Tworki Bieńczyk deals with an exceptional loss and an incomprehensible absence, i.e. the horrifying experience of the Holocaust, which we are used to regarding as inexpressible. The novel is set in 1943, and the main characters are a small group of likable twenty-year-olds, girls and boys, Poles and Jews, who work at a psychiatric hospital under German management in Tworki in the Warsaw suburbs (hence the title). It turns out that the only normal place in an abnormal world is this institution for the insane. In their free time the young people have fun, flirt, walk about the picturesque area and recite poetry, as if the hell of Nazi occupation doesn’t affect them. But, quietly and imperceptibly, without any explanation, each of the heroes disappears from the pages of the novel in turn. They leave behind farewell letters that can never be answered, because their senders are no longer alive. The story ends with a challenge to future readers to “acknowledge receipt” and write their own post-scripts. Marek Bieńczyk has also published a collection of erudite, but humorous articles on the art of drinking wine. - www.bookinstitute.pl/autorzy-detal,literatura-polska,3060,bienczyk-marek.html