Chaulky White - a «gift of tongues rendering visible not the lay sense but the first entelechy, the structural rhythm» 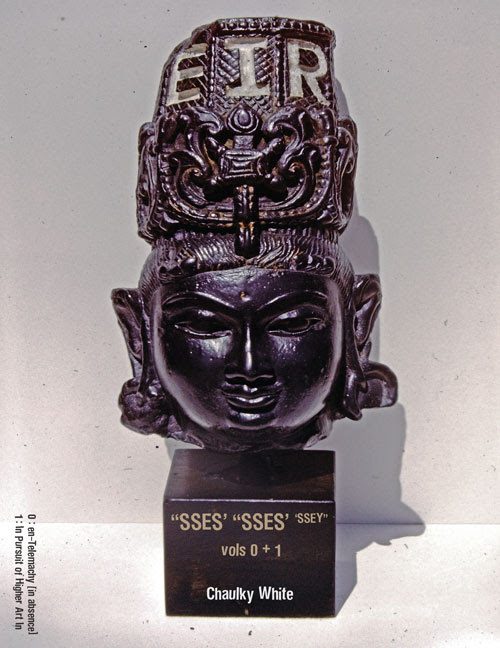 'SSES" 'SSES" "SSEY' is a book object that is based/extrapolates on an MFA thesis Kevin White wrote in 1990 entitled 'SSES" 'SSES" wherein he recapitulated Joyce's Ulysses' recapitulation of Homer's Odyssey to a trip he took across Asia in search of his father (who committed suicide in 1982). 'SSES" 'SSES" "SSEY' takes this recapitulation 1 step further, folding in his journals, unpublished stories + artwork he made before himself dying of a heroin overdose in 1997. The super-scripted "SSEY' represents his brother Derek's editorial role in compiling the book—in belatedly finishing the Telemachean pursuit, searching recursively for his brother searching in parallel for their father. 'SSES" 'SSES" "SSEY' is also a literary work that reflexively interrogates the very transcription + curative processes used to produce it, mobilizing reflexive loops between original imagined intent + editorial deterritorialization...a "gift of tongues rendering visible not the lay sense but the first entelechy, the

Episode 0 (Summoning the Muse) in Sleepingfish