Ernst Kreuder - The characters in the novel counter the enforced seriousness of life with an anarchic, childlike playfulness. have formed a secretive society in the abandoned attics of disused buildings where they while away the hours discussing Art and dreaming of another life 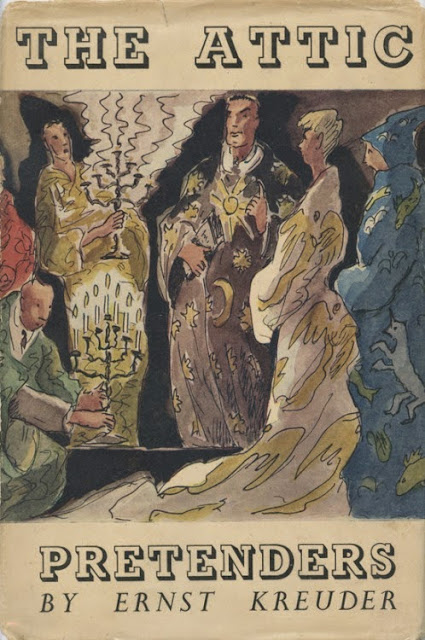 
His 1946 work The Society of The Attic concerned a secret associations view of imagination and reality and was well received. He also wrote works like Those Who Cannot Be Found and The Undiscoverables. Although his works have been described as melancholy or Kafkaesque he stated that "the literary fashion of hopeless despair must be overcome."

This was the first German bestseller after the war, and went on to become the first German novel translated into English after the war. It was part of a trend in German postwar literature that Sebald criticised for its alleged "escapism", but as this novel makes clear, escape is neither as feasible nor as positive as might be suggested.

It starts out of nothing with the narrator meeting up with some old friends, who have formed a secretive society in the abandoned attics of disused buildings where they while away the hours discussing Art and dreaming of another life. There is a lightness to this reminiscent of Kafka's early writings, but the everpresent but never mentioned postwar environment undercuts this lightness with an intangible sense of pain and loss. Later parts move into territory more familiar from Gombrowicz's novels as the suspension of reality becomes more engrained and the characters become trapped within their attempts to escape, or vice versa, it's difficult to say.
Not a brilliant piece of work, as it veers too close to whimsy on occasion, but it nevertheless has a quite disarming sense of the pain and madness involved in the attempt to think, however futilely, of escape. (The title is incorrect: the German version simply translates as "The Attic Society".) - keuner & niemand

A couple years ago I bought Kreuder’s The Attic Pretenders (1946; trans. 1948 by Robert Kee), but by the time it arrived in the mail I had forgotten what prompted the purchase. Tonight I figured it out: in The Man of Jasmine, Unica Zürn writes about wandering into the attics of random buildings convinced she would meet the Attic Pretenders, “these people from a novel she has read and who have come to life in order to please her.” In an endnote, Malcolm Green says it is “one of Unica Zürn’s favorite books. The characters in the novel counter the enforced seriousness of life with an anarchic, childlike playfulness.“
The final paragraph of The Attic Pretenders:
Suddenly I had to stretch myself, to stretch the whole of my body. And with this stretching the last resistance broke inside me. Something seemed to pierce me. It was as if I had run into something. I trembled in every limb. The words were already chasing each other through my brain. I jumped off my bunk, feeling alternatively hot and cold all over. I heard voices that were not there and saw myself as in a dream pull open the drawer, lay the paper out on the table, and dip my pen into the ink. A rushing wind was about me, I felt myself beginning to glide away. I was gliding as in a delirium, as in the moment before falling asleep. I wrote. I left my personality farther and farther behind. I wrote faster and faster. I was losing touch with everything I knew, and yet I had found myself. I had become a great mine of voices and stories and, as I wrote, I fell through space and time into another world.