James Chaffee - This is the sort of genre-pulverizing feat you would expect from the inventor of mathematical pornography. Following the information-theoretic-puzzler drift of Thomas Pynchon's The Crying of Lot 49, this novel careens along a geodesic flow where old-fashioned sex and violence replace the polite veneer of obfuscatory science lingo 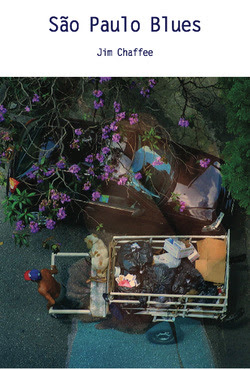 What could be worse than stumbling on the mutilated corpses of a scad of Brazilian hookers? How about falling hard for a Brazilian prostitute marked for death by torture? A web of passion and homicidal fervour snares retired detective Mike Devere on his first excursion to Sao Paulo. Watch the clueless gringo wriggle as he is reluctantly sucked in.
Following the information-theoretic-puzzler drift of Thomas Pynchon's The Crying of Lot 49, Sao Paulo Blues careens along a geodesic flow where old-fashioned sex and violence replace the polite veneer of obfuscatory science lingo. Can Devere untangle the web and straighten the trajectory? Can you?

Jim Chaffee, the former Nam medic, is the greatest writer of violence since Homer. When a guy gets clobbered in a Jim Chaffee book, he doesn’t lie down and lose consciousness for a narratively convenient period of time. He kneels down and pukes. When bullets are involved, blood and mucus ooze from exposed sinuses. “Hearty lungs full of air” are gulped: a reflex of the intact brain stem, “a chemical memory prompting useless remains to take an occasional needless breath.”

São Paulo Blues is a detective novel in the same way that Journey to the End of the Night is a physician’s day book. This is the sort of genre-pulverizing feat you would expect from the inventor of mathematical pornography, the only genuinely new literary form to appear in the last seventy years, for all the plague of “genres” that have lately been pulled out of publicists’ asses.— Tom Bradley

The larger blurb on the back cover, while tantalizing and telling, doesn't seem to be entirely indicative of the book. Purchasers will perhaps be more clearly steered by the synopsis which appears just above. Mention there is made of Pynchon's first book.
Sao Paulo Blues is like Pynchon's Crying of Lot 49, in that deals with entropy and information. But it does so actively rather than passively. Pynchon is passive, more or less, leaving the reader to get the idea of a decrease in entropy after the famous episode of the auction of the stamp, when there will be an increase in information. But he leaves it all in abeyance.
SP Blues is more active in that it increases the information, but the reader himself must decrease the entropy, since it is up to him to piece it all together. Until the reader does so, the entropy will not decrease.
In any case, the synopsis' reference to Pynchon is apt, for Jim Chaffee rises to parallel levels of excellence. A brilliant book! - Phaborinos of Arles 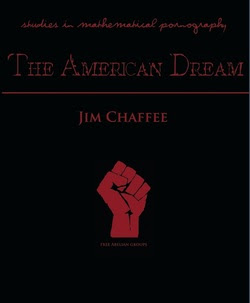 Perhaps the most daring, erotically pugnacious, offensive testament to all that is wrong with the USA, told in a brilliant, seemingly (but not!) disparate merger of mathematics and pornography.

…the sparsity of text on the board surprised me. A nebulous shape with some squiggles like lonesome spermatozoa or maybe spirochetes emanating from a couple points to the boundary, a formula for the conditional expectation on the boundary, nothing else.
Whitey Butcher has been making marks on a chalkboard, pretty much in a trance. Then he comes to himself and notices what he has written. This moment in American Dream is remarkable, in that it clarifies, as much as possible, the subject of this novel: higher math.
Jim Chaffee calls it "…art for art's sake, with no reason to be otherwise."
Like the majority of Americans, I am functionally innumerate. Teacher kept me in from recess in second grade till I memorized the stupid fucking times tables, which I've since forgotten. I never made it beyond first year algebra—no calc, no trig, nothing.
But, in addition to being a mathematician, Jim Chaffee is a novelist, so he knows exactly when to have his protagonist draw me a picture: two or three quasi-organic shapes, or maybe crystalline facets being hinted at by force of number, images that help a numerical mongoloid appreciate all the algebraic topology that's washing over him. Here's one such helpful image, straight from everyone's childhood:
So, connecting preimages above the 2-sphere where they came from as fibers, a bundle of some kind then, clearly you would have a torus wrapped around the 2-sphere with a twist in it. A kind of twisted slinky with infinitesimally close rings… I saw an infinity of slinkies along every potential direction around the great circles, all adjoining in perfect harmony…
And the novelistic aids don't have to appear on a chalkboard or spring from a toy bin. Nightmare hallucinations are effective as well. Disturbing Whitey's rest is a "machine-quaking mound of sand" which makes the math concrete, like a cement mixer configured as a Klein bottle.
But this is not just a mathematics book. It's mathematical pornography. Fucking is done in borderline infinite numbers of ways; human orifices are delved into like non-orientable surfaces. Whitey's encounters with females are analytically penetrative, like those portrait busts the Romans used to carve, with every wart and skin pore and chancre right in place, alongside noses and brows that would, in a more idealized context, be implausibly beautiful.  Butcher sees the ugliness and the beauty and the inner complexities they conceal, ornament and express.
In the middle of the sex sections, which begin primarily non-mathematical, sudden throw-aways propel us back into the math guy's head—
I wasn't up for her mood and didn't take the bait, sitting quietly probing for deficiencies in my grasp of Ito's construction of his stochastic integral.
Whitey Butcher has the mathematician's manner of considering people other than sex partners as well. His view of his own family shows the superhuman aplomb available to the mind accustomed to moving in pure abstraction, the brain quintessentialized in the retort of cohomology and Hodge theory. A Vietnam vet, he was better off being AK-47ed in the jungle than hanging around his monster mom. And not only does he allow himself and us to realize this, but he expresses it out loud, without rancor or sentimentality. Her death scene equates thus:
...about her I certainly didn't give a rat's ass. Let the ancient vengeful volcano god of genocidal, homicidal smiting fury she worshiped carry her through…
Fancy-fucked women and dead mothers are all well and good. But, as one might expect, it's in the field of music appreciation that we get our sharpest glimpse of Chaffee's supra-dimensional mind. At one point Whitey turns on the phonograph, and—
…listens to [Eddie] Gomez man-handle the bass and [Bill] Evans’ deeply self-involved solos, conversing with himself and handing Gomez as much rope as himself…
…I found myself leading the Gomez solo on the seventh cut by an infinitesimal time step. After a brief flirt with some melodic memory, it simultaneously dove and climbed onto the atonal aharmonic arhythmic free-born bowing path… jangly stuff, nervous tension building to a dissonant variant of an exotic sphere a la Milnor or Kervaire…
Jazz brings K-theorists to a mind such as Chaffee's—which is unutterably strange. But nobody has gotten musical experience any better than this in fiction. When, at the end, topology is spoken of as "singing true magic" it comes across with absolute authority, from a man who hears music as sharply as he maps unmappable space.
As a feat of virtuosity, American Dream is analogous to one of Eddie Gomez' four-octave sixteenth-note runs, executed on a fingerboard with extreme negative Gaussian curvature. This is and will remain a unique book. - Tom Bradley


MATHEMATICAL PORNOGRAPHY’: A Book Where Men Go To Die

Glancing up, I witnessed Dina crawling, hair turbaned in a towel, tits nearly dragging along the old wooden planks. The vision brought with it the realization that the degree of conjugacy of a conjugate point measured by the index and degree of degeneracy of the form measured by its corank amounted to the same thing. Degeneracy and degrees of freedom related. It seemed just. Still, it pissed me off that he’d dragged me into conjugate points with dreary shit using determinants, a clunky foray into discontinuous vector fields that seemed unnecessary . . . That’s why I fucking hated books. Too much blah-blah-blah. Limit everyone to two pages.
-- Jim Chaffee, American Dream: Studies in Mathematical Pornography, p. 156

at May 08, 2015
Email ThisBlogThis!Share to TwitterShare to FacebookShare to Pinterest
Labels: James Chaffee