Kevin Breathnach - A documentary of the narrator's post-adolescent relationships. an exploration in artifice and honesty; an autobiography of a compulsive liar whose intimate portrayals of political inaction, sexual repression, masculinities in crisis and addiction to drugs and pornography collide with six piercingly intelligent critical essays on photographic self-portraiture and the personal diary 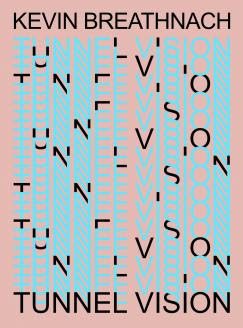 
A lethal cocktail of memoir and criticism, Tunnel Vision launches the career of one of the finest new essayists around.

Tunnel Vision is a book unlike any other. A documentary of the narrator's post-adolescent relationships; an account of time in Chemnitz, Bergen, Dublin, Paris, Gwangju, Munich and Madrid; an exploration in artifice and honesty; an autobiography of a compulsive liar whose intimate portrayals of political inaction, sexual repression, masculinities in crisis and addiction to drugs and pornography collide with six piercingly intelligent critical essays on photographic self-portraiture and the personal diary. Whether writing about the sale of Susan Sontag's archive, or the reframing of Andre Kertesz's wedding photograph, Breathnach's writing - brave, wild, and genre-bending - inaugurates a dazzling new voice in art and literature.


Kevin Breathnach is making what seem to me substantial contributions to the field of essay-writing.
He brings a keen sensitivity to the practice of criticism and a superb critical intelligence to his own intimate personal narratives. His essays demonstrate not only an impressive depth of learning, but an even more necessary depth of feeling. He is certainly one of the most interesting writers working in Ireland today. - Sally Rooney

Blessed with a bracing critical intelligence, an urbane comic sensibility, and an extraordinary prose style, Kevin Breathnach is among the most original and exciting non-fiction writers to emerge in recent years. - Mark O'Connell

Kevin Breathnach is a critic with a particular interest in visual culture, whose writing about modernist photography and avant-garde cinema – often concerned as much with artists’ lives as with their output – has appeared in journals such as the White Review, gorse and the Dublin Review. His first book, Tunnel Vision, brings together a number of these pieces alongside personal essays about his romantic relationships and sojourns in various European cities including Paris, Munich and Madrid. His prose style is a studied blend of literary registers, combining the abstractedly mechanical didacticism of an exhibition catalogue with the unhurried languor of the travel writer, and a sprinkling of Sebaldian lugubriousness.
Several of the essays on photography take a particular interest in the behaviour of male artists towards women. An essay about the photographer Berenice Abbot, who began her career as the assistant of Man Ray, relates how she was exploited by her mentor. A piece on the Hungarian photographer André Kertész examines how successive iterations of a portrait of Kertész and his wife were differently cropped, resulting in subtle changes in tone and emphasis that seemed to correspond to the vicissitudes of their relationship. Elsewhere Breathnach notes that the Spanish film director Pedro Almodovar appeared to have lifted heavily from Ingeborg Bachmann’s 1971 novel Malina for his 1991 film Women on the Verge of a Nervous Breakdown, without acknowledging her in the credits.
Relationship history
This motif takes on a pointed aspect when juxtaposed with Breathnach’s self-critical reflections on his relationship history. One girlfriend is dumped “so ineptly, and with so little in the way of explanation, that I’d lost almost all of my college friends as well”; later, when he tells another girlfriend that he is leaving Dublin to go and live in Spain, he secretly hopes that the vision of him swanning around in Madrid will elicit her jealousy. In between those two there is a drug-fuelled romance with Colette, which goes awry when Breathnach discovers the joys of combining mephedrone and pornography: the vasoconstriction caused by the drug enables him to enjoy epic 10-hour masturbation sessions culminating in lengthy orgasms. Before long, his IRL sex life has gone to pot: “I felt no desire for Colette any more. I felt no desire for anyone at all. On the rare occasions Colette and I had sex, I would press my face into the pillow and try to visualise some porn.”
Breathnach, like fellow young Irish writers Sally Rooney and Nicole Flattery, is acutely sensitive to the role of aspiration and artifice in shaping the artistic persona; how the accumulation of cultural capital entails a certain vulgar acquisitiveness. This book’s chapters are punctuated with choice quotes from the likes of Susan Sontag and Walter Benjamin, but the conspicuous erudition is mitigated by a disarming self-awareness as Breathnach frequently sends up his own earnestness. He tells us he has a habit of frequently pausing movies in order to take screenshots; having accumulated a folder of over two-thousand film stills, he will periodically post one on Twitter “in a fairly transparent effort to construct a public image for myself, a cultural identity”. A homosexual encounter in Paris is “yet another exotic facet of my fascinatingly complex personality”. In Madrid he sits in a cafe “trying discreetly to be observed, reading books, large ones, held at such an angle as to place the title in clear view. I didn’t notice many noticing.”
Author’s life
Tunnel Vision’s whimsicality sometimes lapses into self-indulgence: an anecdote about joining a gathering of the youth wing of the French Communist Party for a lark, and another about trying and failing to procure ecstasy in a French nightclub, read like reminiscences of gap-year japes. Ditto the tales of drug-taking with Colette. (“I am fucking fucked, she cried. Pretty soon I was fucked too.”) These inanities do, however, provide important context, reminding us that we are inhabiting a particular period in the author’s life: the naive hinterland between adolescence and mature adulthood, whatever that is.
Speaking at the recent London launch of his memoir, Who Killed My Father, the French author Edouard Louis recalled being told by a friend that he appeared, in his writing, to lack pudeur or shame. This, Louis explained, was precisely the point: he was specifically interested in writing about “the things that cannot not be said.” The burgeoning genre of autobiographical creative nonfiction is challenging our deep-seated cultural squeamishness about unchecked sincerity. “Growing up in public” is widely held to be unseemly, but in its best moments this candid portrait – of the young writer as flaneur, fanboy, sometime chronic masturbator and occasional cad – makes a good case for ditching that taboo. - Houman Barekat
https://www.irishtimes.com/culture/books/tunnel-vision-review-essays-ditch-taboo-in-quest-for-candid-self-portrait-1.3806934