Gaston de Pawlowski was the France’s Albert Einstein of humor. a dizzying catalog of absurd imaginary gadgets and “improvements” to everyday life. An early satire on consumer society and the cult of the inventor 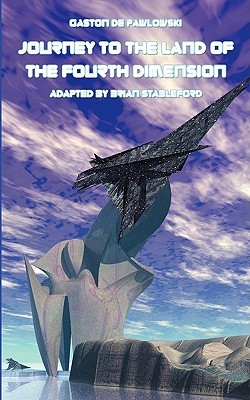 
Written between 1895 and 1912, Gaston de Pawlowski's Journey to the Land of the Fourth Dimension predates by almost 20 years Olaf Stapledon's Last and First Men. In this prodigious future history, we shall visit the singular era of the Leviathan, when a colossal entity enveloped men like cells in a gigantic body, the time of the Scientific Tyranny, when the Savants ruled supreme, and finally the Great Idealist Renaissance, or Age of the Golden Eagle, when the fourth dimension becomes familiar to all men. We shall meet homunculi and supermen, intelligent machines and giant microbes.


"Much primitive futuristic fiction now seems banal and unadventurous in its anticipations, but there is nothing banal about Pawlowski's future history. The surreal quality of his futuristic vignettes-especially those dealing with "atomic dissociation" and future biotechnologies in the Scientific Era-has been given an extra edge by actual advances in modern science." Brian Stableford.


This volume also contains the preface to the 1923 edition by Pawlowski in which the author explores and attempts to come to terms, philosophically and scientifically, with the impact of Einsteinian psychics upon his work.

A friend to Alfred Jarry, Alphonse Allais, and Guillaume Apollinaire (and a later inspiration to Marcel Duchamp), Gaston de Pawlowski was the France’s Albert Einstein of humor. First published in book form in 1916, New Inventions and Latest Innovations collects in one volume the endless inventions Pawlowski imagined and wrote up for Le Rire rouge, forming a dizzying catalog of absurd imaginary gadgets and “improvements” to everyday life. An early satire on consumer society and the cult of the inventor, the collection would also become a noteworthy precursor to the sort of imaginary science that would influence the Collège de ’Pataphysique.

Gaston de Pawlowski (1874-1933) French publisher and author active from 1894, much of his early work being humorous, and many of his early short pieces being spoof descriptions of impossible or unlikely Inventions. Of greater sf interest is Voyage au pays de la quatrième dimension (1912; exp 1923; trans Brian Stableford as Journey to the Land of the Fourth Dimension 2009), a complex, episodic Future History, on lines that anticipate Olaf Stapledon's Last and First Men (1930); the disjunctive narrative touches upon a range of eras, including one known as Leviathan, when humanity has been absorbed into something resembling a Hive Mind, climaxing in the Age of the Golden Eagle, when the fourth Dimension is accessible both aesthetically and as a usable understanding of the physical world. Supermen, sometimes short-lived, are frequently found throughout, as are miracles of science. The first edition tends to the exorbitant, aerates the depicted future; the second edition, which Stableford translates, darkens that vision, almost certainly because World War One intervened. [JC] http://www.sf-encyclopedia.com/entry/de_pawlowski_gaston