Craig Gibson - Grim, nasty and highly cynical, laden with gallows humour, Cider Camp has the power to repel and amuse in equal measure, and protrays a culture in which humanity and compassion are rapidly becoming a thing of the past.


The debut collection from Craig Gibson.

Grim, nasty and highly cynical, laden with gallows humour, Cider Camp has the power to repel and amuse in equal measure, and protrays a culture in which humanity and compassion are rapidly becoming a thing of the past.
In the very near future a radical solution to the problem of chronic inebriation has been devised: the RCIA, known to staff and inmates alike as CIDER CAMP, and masterminded by the frighteningly right wing Professor Blackwood.
Comparisons are made between Cider Camp and the Gulags, as well as the Death Camps, but with a crucial difference - admittance to the camps is strictly voluntary!
Also included in the collection are Accents and Manners / Choice? / The New Town Vampire
Craig Gibson is the editor of Edinburgh's One O'Clock Gun.

The line between science fiction and realism can be far finer than people realise. The idea of an island camp for “incorrigible alcoholics” is lurid, especially when we are told entry is voluntary.
Worse, many readers will find themselves laughing at Cider Camp, despite the novella being nasty, grotty and grubby from start to finish.
Craig Gibson already has some notoriety in Edinburgh – hopefully Cider Camp will widen his appeal.
Cider Camp may be outrageous, but it is not that implausible. It’s topical, given the British Government’s austerity regime, and the relentless media stories about various undesirables – asylum seekers, welfare scroungers and the like.
Sending troublesome people to remote islands is nothing new. The penal colonies at Botany Bay and Van Diemen’s Land may be long gone, but Australia is keeping up the tradition. These days, its outlying islands are not being filled up with militant Aborigines and criminals, so much as anyone who tries to gain illegal entry into the Wonderful Land of Oz.
Nearer to home, various islands are occasionally mooted as rehab centres too. Many of Scotland’s islands were cleared by social engineers, so it is not impossible they may be repopulated by them.
In A Clockwork Orange, Anthony Burgess explored the issue of free will. Both the book and the film have been horribly misunderstood, but the central message still stands. Likewise, many people will remember Trainspotting, for its “choose life” sequence.
The abuse of any addictive substance nearly always starts with a choice, but in far fewer cases does it end with one. This is the premise that Cider Camp takes – the alkies sign themselves into the camp, lured in with the promise of unlimited free cider, but after that, they find themselves in an environment that they will never leave alive. Severe addiction, and the DTs, have long since deprived them of any agency they might once have had.
Snoopers of any kind are kept well away from the cider islands, as are unofficial visitors. When someone tries to set up a recovery programme on one of the islands, a solution is found that is as simple as it is effective. The cider camps for men prove to be so successful, that misguided protesters actually start arguing for female ones. And the novella ends with Blackwood trying to extend his idea to other miscreants.
Other SF works that bear comparison are Logan’s Run, Soylent Green and even the graphic novel V for Vendetta. All of these feature supposedly voluntary death for “useless mouths”. Cider Camp is set in a much less exotic world than any of these works.
A recent FOI request to the British Government found that well over two thousand people have died since being found “fit for work” by the DWP. This figure excludes suicides, such as Paul Reekie. On another front, we hear that parents will not be able to claim benefits for more than two children. It does not matter if you’ve already got more than two children. That was a choice that you made. It does not matter that the UK has an aging population. What happens to your family is not our business. As we told you repeatedly before the election, we’re only going to support hard-working families. None of the alcoholics in Cider Camp are murdered – not officially anyway. An unlimited supply of cheap cider ensures that the camps remain attractive, and pull “incorrigibles” off the streets. Accidents, fighting and illness do the rest.
The chapters shift perspective and even style constantly. Like the camp inmates, most of the characters come and go with little comment. In the first chapter we meet Sullivan, a tramp, who disappears into the background over the course of the book. In the second chapter we are introduced to the repulsive Professor Blackwood, who has come up with the idea. By the end of Cider Camp, he has received a knighthood. Elsewhere we read a glowing government report about the island, a desperate message in a bottle, the diary entry of one of the camp administrators and even a poignant story about a bitterly depressed former academic, who is one of the few alcoholics to be denied entry.
Readers have the opportunity to sign themselves into the Cider Camp, on a form provided in the book. This is a very nice touch in my view. It is reminiscent of all the one-sided contracts that are inflicted on us by banks, utility companies, the government and the like. In some ways, we all seem to be living in Cider Camp now. And we’ve committed ourselves voluntarily.
Besides the aforementioned novella, Cider Camp contains several short stories. They have an Edinburgh flavour to them, with a pinch of Leith thrown in.

* The New Town Vampireis a well-deserved parody of one of our more pompous and prolific novelists. It should happen more often.


* Accents and Manners is a tale about snobbery. Since I’ve experience of that from both sides, I could well relate to it.


* What Johnnie Did deals with a pensioner’s hobby and self-identity. Gibson states in a note at the back that a number of readers thought that it was based on a true story. It certainly feels that way.

*Choice? is the weakest perhaps. It deals with the problem of consumerist variety. Some of the themes are developed better in the neighbouring Cider Camp. The mentions of Safeway and fifty rubbish TV channels (only fifty?) date it. - www.scottishbooks.com/2015/11/cider-camp-and-other-tales.html

at December 15, 2015
Email ThisBlogThis!Share to TwitterShare to FacebookShare to Pinterest
Labels: Craig Gibson

Tom Strelich - adventures of Hertell Daggett, the owner-operator of the Li’l Pal Pet Cemetery, who discovers a long-lost secret experiment dating from the Kennedy era buried deep below the graves. This novel will evoke a wide range of emotions, from outright laughter to shock, indignation and everything in between

Tom Strelich, Dog Logic , Owl Canyon Press, 2017 https://www.tomstrelich.com/doglogic Hertell Daggett is not what he used to be: once mar... 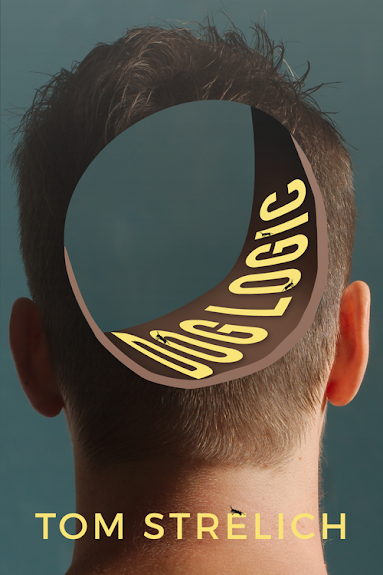