Jacques-Antoine Révéroni Baron de Saint-Cyr - a minor classic of the French Gothic. It concerns a noble young mother buffeted by misfortune, flying from one disaster to the next, only to fall victim, time and again, to seemingly supernatural depravity 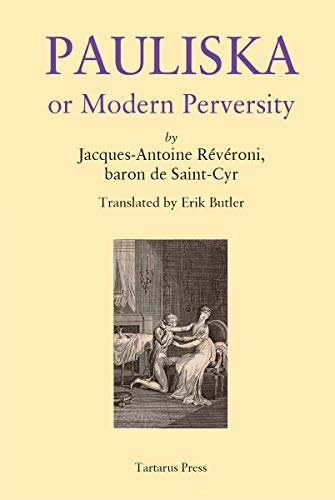 
This is the first English translation of Révéroni de Saint-Cyr’s Pauliska, or Modern Perversity (1798), a minor classic of the French Gothic. It concerns a noble young mother buffeted by misfortune, flying from one disaster to the next, only to fall victim, time and again, to seemingly supernatural depravity. . . . In the course of her adventures, Pauliska traverses the greater part of Europe and winds up in the clutches of mad scientists, libertines, political con-spirators, smugglers, counterfeiters, and more.
Pauliska is very much a part of the roman noir genre, which countered the optimistic mood of the Age of Enlightenment with a fatalistic vision of individual and communal life at the mercy of ancestral curses, unspeakable secrets, and dark desires. Despite its debt to de Sade’s Justine, its contradictions, sensationalistic title and generic traits, Pauliska displays genuine originality and gusto.
Jacques-Antoine Révéroni, baron de Saint-Cyr (1767-1829) belonged to a family of Italian extraction that followed Catherine de’ Medici to France. He interspersed writing with an undistinguished military career. Failing to gain a foothold in the republic of letters, Révéroni ultimately went insane and died more or less forgotten.
Cover illustration from the first edition of Pauliska, Lemierre, Paris, 1798.


First published in 1798 and translated into English for the first time, Révéroni’s deliciously lurid novel is a heady dram of vintage gothic. Pauliska is a Polish countess, who, with her eight-year-old son, Edvinski, is routed from her homeland by Russian invaders, only to fall into the clutches of a lecherous alchemist and, later, into the hands of a gang of counterfeiters and assassins. Her personal perils are intensified by separation from Edvinski, who barely escapes being made a castrato by a villainous monk, and the travails of her protector, Ernest Pradislas, who becomes the victim of a society of man-hating female misandrophiles. The action careens across Hungary, Germany, Italy, and other European locales, and the onslaught of “dissipation and perversity” to which its hapless victims are subjected are embodiments of “warped maxims and absurd systems” relevant to the era in which the story unfolds. With its many moments of fade-to-black fainting, hairbreadth escapes, and rationalizations of what may be supernatural, this book is a high melodrama sure to appeal to fans of the writings of Ann Radcliffe, Matthew Gregory Lewis, and other classic gothicists. - Publishers Weekly