Benjamin Zucker takes his form from the Talmud—a central text surrounded by commentaries, with each page accompanied by a photo or artwork on the opposite side. The novel's main character, Abraham Tal, is (like Blue's author) a gem merchant in New York City

Modeled after the Talmud, this uniquely constructed novel introduces Abraham Tal, a New York diamond merchant who spends his days counseling friends and neighbors from his shop. A first novel.

An imaginative, unusual layout inflates Zucker's novel into a true novelty as well as a detailed, heartfelt love story. Modeling his book on the Talmud, Zucker places a brief chapter of the tale in the center of each odd-numbered page, surrounded by commentary on the passage by such figures as Kafka, Vermeer, Monet, Joyce, Bob Dylan, Bobby Fischer, an assortment of ancient Greek and Jewish scholars and the central character's family and loved ones. Photographs and paintings on facing pages reference images from the text. In the core story, a young artist named Dosha seeks counsel from Abraham Tal, a New York diamond merchant whose avocation is dispensing advice: for $1 he counsels how to change your life; for $2 he tells you how to change it back. Dosha wants to know how to get her lover, Raphael Fisher, to marry her. Abraham, who has not proposed to his own girlfriend, Rachel, sees Fisher on Dosha's behalf, and in the meantime confronts his own family and Joycean memories. From this simple encounter a universe unfolds. Like all the novel's commentators, Joyce chimes in with advice and personal perspectives, riffing off the main story in quotes from published works or works of Zucker's imagination. Reproductions and details from the artistic creations of Vermeer and Modigliani, and from ancient Jewish texts, are extraordinarily beautiful. Antique jewelry is featured, too: a Venetian wedding ring is portrayed through photographs and in Abraham's mother's and grandmother's stories, as a symbol of cultural, religious and personal heritage. While cleverly presented, the descriptions sometimes grow tedious, however. Zucker himself is an established jewelry expert, the author of several books on gems and culture (Cameos in Context) and he treats this slight but multifaceted story like a precious jewel, looking at it from all directions, holding it up to the light, under the microscope, defining its color and shades, detailing its beauty and imperfections. - Publishers Weekly


The author of several nonfiction books on gems and jewelry draws on his expertise for an ambitious first novel of challenging design.
Zucker takes his form from the Talmud—a central text surrounded by commentaries, with each page accompanied by a photo or artwork on the opposite side—but the format looks denser than it is. In essence, the author simply embellishes a mundane core story with lots of modernist gestures, a hodgepodge of quotation and imagination that draws on everyone from Kafka to Derrida. His gallery of images is mostly a hall-of-culture heroes: Bob Dylan, Jackson Pollock, van Gogh, Vermeer, assorted rabbis and yeshiva students. At the heart of this collage is the tale of New York City diamond merchant Abraham Tal, who serves as a counselor to his Hudson Street neighbors, doling out advice for two dollars a session. Dismissed by his jewelry-dealing older bother as a pathetic loner, Abraham blames this same brother for all his worldly troubles. A long-ago thwarted marriage in Antwerp obsesses Abraham to the end, which eventually comes in an Israeli synagogue attended by his faithful nephew Isaac. Before that, though, Abraham smartly advises Dosha, a local painter, on how to win in marriage her Yalie boyfriend, Fisher, an aspiring author hoping to write The Great American Novel. The final scene finds Isaac’s son, years later, in the Israeli desert, fulfilling the dream of his great-uncle in a moment of transcendent blueness. Zucker’s “guide to the reader” invokes Joyce and Fitzgerald, but these references are unmerited conceits; his commentators are mostly idle kibitzers who rarely add anything essential to the simple text, and his quotations are often quite commonplace.
The various materials assembled here might add up to a novel, but not without greater authorial inventiveness. - Kirkus Reviews


Blue, a wildly original first novel by Benjamin Zucker, is a richly illustrated, multilayered story about aesthetics, love, brotherhood, and tradition. The novel's main character, Abraham Tal, is (like Blue's author) a gem merchant in New York City. Tal's treasure is a Venetian Jewish wedding ring, a mysterious link to the traditions of his family and his culture; his search for the ring's origins and significance drive the book's main plot. Blue's design is highly unusual and worth close attention. The text of the main story, about Tal and the ring, appears at the center of every other page in the book (each page of text faces a full-page illustration, meant to shed light on the story--subjects range from a photograph of the Taj Mahal to a self-portrait by Claude Monet). This central text is surrounded by commentaries in the margins, which are written in the voices of historical characters such as Vermeer, Crazy Horse, Bob Dylan, Proust, and Kafka, as well as the voices of Tal's mother, father, and girlfriend. The commentaries, like Talmudic writings, play with, build upon, and illuminate the primary story. Blue moves fluidly through time, offering its reader countless opportunities to discover the harmonies and beauty that, over the course of this story, its main character gradually learns to see. --Michael Joseph Gross


'Blue' is a multifaceted work that has no beginning and no end, no straight lines, and where the past and present intersect. In that sense, it is a design fabricated to evoke the experience of Kabbalah. At the same time it is constructed like pages of Talmud with a central text that contain the modern story but vaguely evoke relationships and events in the Torah, and with parallel commentaries/stories on the margins, the story spins off in many directions, sometimes off on its own tangents and sometimes bending back on itself to illuminate and elucidate the text. These parellel stories are a comingling on each page of famous Jewish mystics such as Luria, numerous Rabbis of old, with Kafka, Bob Dylan, Vermeer, a Native American chief, and the fictional Tal's parents, taking the form of direct quotes, actual and imagined lives which can be read in any order along with or without the main text. In yet another dimension, this is also a great art book of past and present, combining masters like Van Gogh and Vermeer with photographs of Kafka and Bob Dylan, and of Jewish scholars and students in Poland prior to World War II. The art work, too, also intended as a commentary to interact with the various texts.
The central story, which reads like an allegory belongs to Abraham Tal, a New York gem merchant and advice giver, who can't solve his own problems. Among other concerns, he is torn with indecision and regret about whether to marry Rachel Heller. Eventually this leads him on a journey to Safed, the center of ancient Jewish mysticism, presumably to track down the origins of a 16th century Venetian wedding ring, which of course contains a sapphire, but also as a personal quest for spiritual answers.
Blue holds many meanings. The most obvious is the blue sapphire gem which narrator, Abraham Tal, is using to make a suite of jewelry. Tal connects the word sapphire to "sefer" which means "book" in Hebrew, and to the giving of the book, the story of Moses finding a blue sapphire at the burning bush and the continuity of a people commemorated in the blue thread of the tallis. There is much more. Almost every page refers to a blue stone, blue in someone's clothing, blue walls, blue light.
I found Mr. Zucker's notes at the beginning and end of the book a good source as well as a help to confused readers. One cannot help but be confused (it even seems intentional), but at the same time delighted with this highly imaginative and light-hearted multimedia feast. - Lynn Adler @ amazon.com 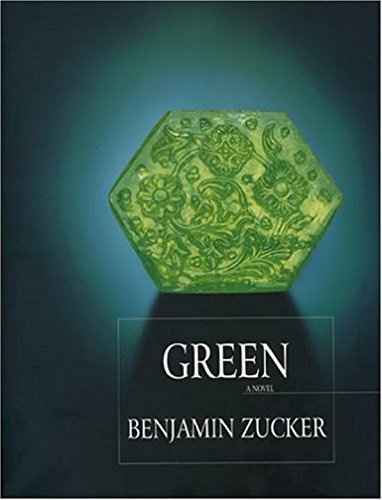 
A richly-textured novel, filled with paintings, illustrations, and photographs, details Abraham Tal, a New York gem merchant and advice-giver to his friends and neighbors in Greenwich Village, who has inherited a spectacular realm of voices, including Borges, Breton, Monet, and Melville - all of whom vie for his attention in order to dispense important information.


Picking up where he left off in the remarkable Blue, Zucker once again mixes art, history and narrative to examine the fate of a young Jewish man in New York. Using the same Talmudic style, in which the main story is placed in the center of the page and surrounded by blocks of running commentary, Zucker introduces the plight of Raphael Fisher, a writer at Time Inc., who finds himself unable to make a decision abut his relationship with Dosha Jerusha. Fisher's confidant is the same gadfly gem dealer who starred in Blue, Abraham Tal: he steers Fisher in a variety of philosophical and artistic directions for guidance as the writer pens the proposal for Green and tries to get some attention for the project from Time mogul Henry Luce. The inevitable movement toward the wedding is almost an afterthought as Fisher journeys along his unique path, accompanied by real and imagined commentary from the likes of Fisher's parents, Vermeer, Bob Dylan and F. Scott Fitzgerald. Given the ambitious but somewhat fragmented concept, the beauty of Zucker's book will rest in the eye of the beholder: fiction fans who prefer a straightforward narrative will tend to see it as a coffee-table art book containing a rather disjointed story, while art devotees looking for something more than a coffee-table book should be entertained by the inventive combination of gorgeous visuals and intriguing commentary. - Publishers Weekly


Green continues the story that began with Zucker's previous novel, Blue, about a New York gem merchant named Abraham Tal who offers advice to friends and family from his shop in Greenwich Village. Here Abraham guides Raphael Fisher, a young writer unable to make up his mind about a relationship, as he takes on a series of artistic and spiritual endeavors. Like its predecessor, Green combines an ingenious use of graphics and layout (each page is faced with color reproductions of, for example, C‚zanne and Vermeer paintings, as well as images of jewels and calligraphy) with an exuberant intersection of voices that jostle one another across the pages. The novel is laid out in a manner similar to the Talmud, with a main narrative passage occupying a block in the center of the page and surrounded on all sides by passages from other authors, among them Bob Dylan and Marcel Proust as well as Abraham's own ancestors, who offer their commentary on the story as it develops. This beautifully produced and inventive second novel by Zucker, himself a New York gem merchant, is recommended for all literary collections. - Philip Santo 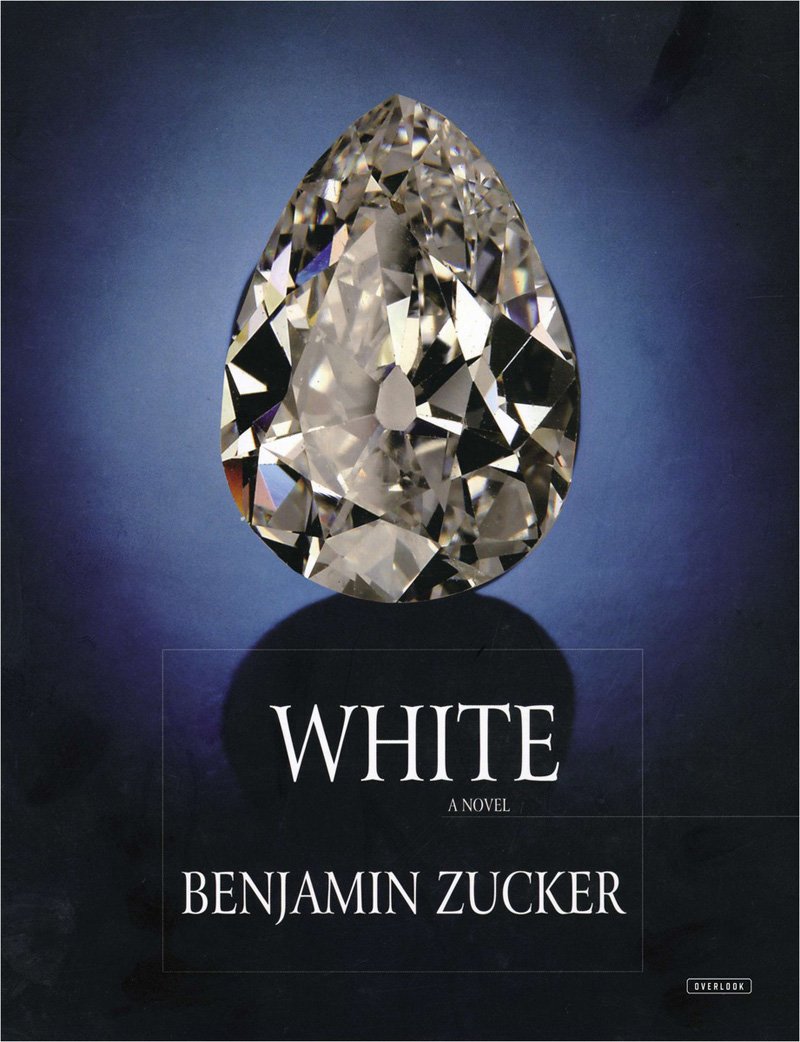 
Talmudic in form, sui generis  in conception, this novel completes the story of the Tal family, a New York City family in the gem business, begun in Blue  and Green. The story is juxtaposed against marvelous images, among them paintings from Mary Cassatt and Vermeer and a collection of photographs, ranging from Bob Dylan, to the Wild West days, to moving works by Roman Vishniac. An extraordinary novel that is at once broad in its outlook and deftly self-referential, White  concludes a remarkable family saga.