David Hayden - This collection comprises a miscellany of vignettes that are both unsettling and ludic. Eaten apples are regurgitated and made whole, squirrels lecture on storytelling, decapitated heads merrily sing as they bounce across the floor 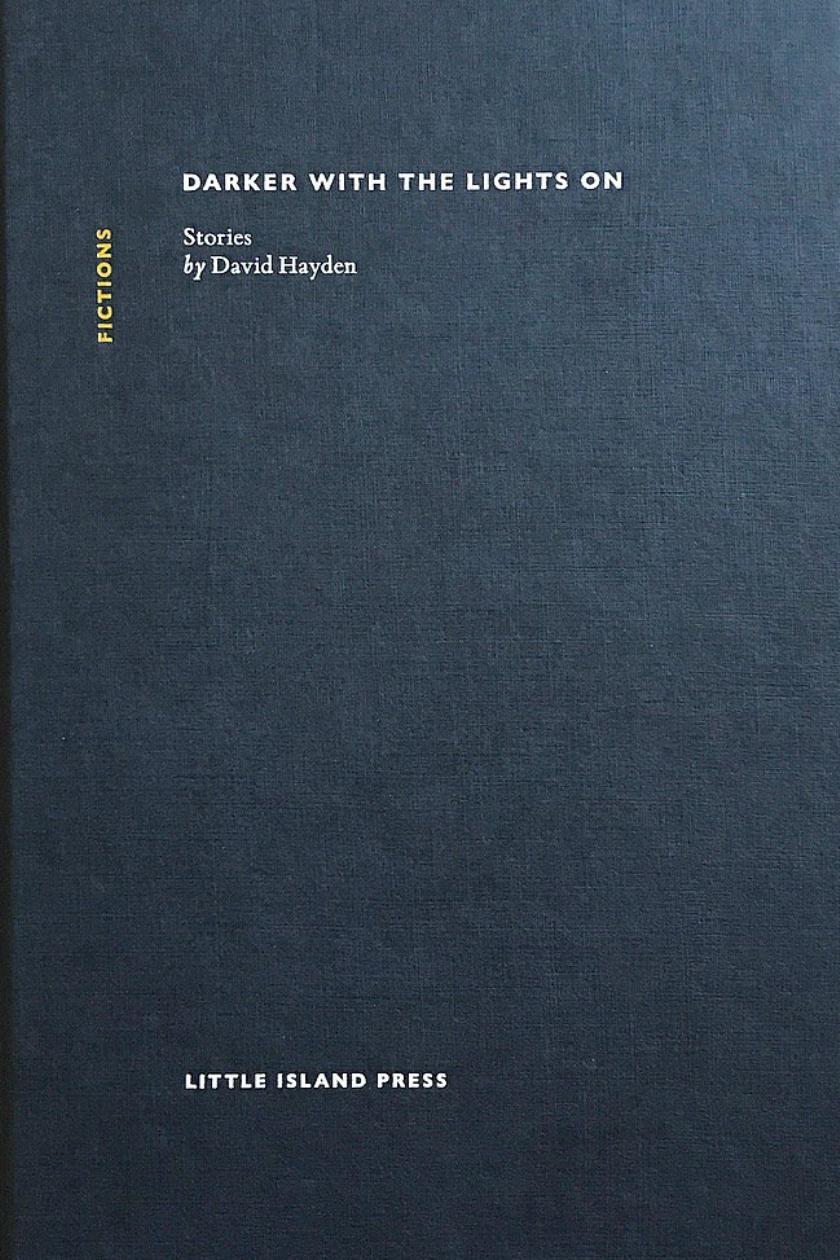 
Driven ceaselessly, hypnotically forward by a powerful, deeply felt narrative force, the stories in this debut collection pull off that rare trick of captivating the reader, while twisting the form into truly new shapes. Comprising compelling stories made memorable by an imagist’s flair for photographic observation and unsettling, often startling, emotional landscapes, Darker With the Lights On introduces a mesmeric new literary talent with seismic potential.


"It’s an open secret that David Hayden is one of the most interesting short story writers around. Why it’s taken this long for his first collection to be published is beyond me but I, along with anyone with even the vaguest interest in looking at modernism anew, will be queuing up for a copy." – Eimear McBride


"Quietly innovative, subtle of tone, full of feeling – this is a superb debut" – Kevin Barry


"One of the most startlingly brilliant and original debuts I've ever read. Hayden is one hell of a talent." – David Collard


"It's an open secret that David Hayden is one of the most interesting short story writers around. Why it's taken this long for his first collection to be published is beyond me but I, along with anyone with even the vaguest interest in looking at modernism anew, will be queuing up for a copy." - Eimear McBride "Quietly innovative, subtle of tone, full of feeling - this is a superb debut" - Kevin Barry


This collection comprises a miscellany of vignettes that are both unsettling and ludic. Eaten apples are regurgitated and made whole, squirrels lecture on storytelling, decapitated heads merrily sing as they bounce across the floor; David Hayden’s debut collection is a joy. Plus, Little Island Press is producing some of the most beautifully made books in the UK today. - www.the-tls.co.uk/articles/public/republic-of-consciousness-prize-longlist/

If I told you David Hayden’s short stories feature decapitations, cannibalism and sudden, unexplained immolations, you might reasonably surmise that he was peddling some kind of gothic horror. But his treatment of the macabre is so exquisitely weird and so unobtrusively deadpan as to defy easy categorisation. The severed head rolls away and sings a ditty (“One day I will be made whole”); the cannibalism occurs in a ludicrously genteel setting, with the sacrificial victim clothed in a tweed jacket (“His arms and hands were raised and rigid like a pugilist hare’s”) and dished up next to a plaque bearing his name, amid “the murmur of . . . chatter, chortles, giggles, bronchial coughing and, concealed in the admixture, several portions of social silence”; and as for the small troupe of dancers who have unaccountably caught fire, they “keep in step, bending and swooning, circling, circling, until, mostly naked and hairless, they fall as one, a stack of charred sticks,” whereupon the story proceeds without them.
Many of the tales gathered in Darker With the Lights On, which is Hayden’s debut collection, resist straightforward interpretation. In Hay a hydraulic engineer is hired to fix a mine which has been flooded by the tears of the miners who work in it; they will not stop crying. The owners turn the situation to their advantage in ingenious fashion, planting zucchini, pak choi and peppers, and engaging the workers as “shift weepers” to irrigate the vegetables. Whatever its import, the scenario is marvellous in and of itself, and there is a melancholic poignancy in this strange vision of a large contingent of burly miners in a state of collective lachrymosity: “The rise, rise and fall, fall of men sobbing finds a shape, each shudder mounting on the others.”
Art for art’s sake
In An Apple in a Library, a man scoffs an apple and then contrives, impossibly, to un-eat it: “a waxy, green ribbon peels out from the reader’s mouth and spins around the fruit until it is complete”. We are in the riotous realm of art for art’s sake, where enjoyment in language and fancy takes precedence over plot and characterisation. There is a striking richness to Hayden’s prose, a measured, dextrous eloquence animated by a quietly rhythmic cadence that wanders, from time to time, into a lyric timbre. One of his narrators, a father speaking from beyond the grave, tells of his yearning “to gather up my bones, to dispose of them in various poses; to dance, to fight, to feed, to fuck, to punish”.
Some of the stories do, however, lend themselves to allegorical inference. In How to Read a Picture Book, a giant squirrel named Sorry delivers a monologue to a classroom of young children on the subject of writing, advising them on perspective, point of view and so on, in a manner redolent of creative writing manuals. His suggestion that “you can make scary things funny or silly or good. Or good things scary” would seem to be a nod to Hayden’s method. Ditto his recollection of having been told off in drawing classes for leaving too much blank space in his pictures: à la Sorry the Squirrel, Hayden’s storytelling is oblique and elliptical, conspicuously lacking in the rudiments of scene-setting. In a few instances the sense of obscurity is perhaps a little overcooked, but the majority of the tales in this 20-strong collection are taut and engaging.
We encounter another eccentric pedagogue in Play, in which an academic gives a talk on the developmental importance of play. (Hayden’s description of the professor is characteristic in its droll, impassive repetition: “His glasses slid down the bridge of his nose. He pushed them up with his index finger. His glasses slid down the bridge of his nose.”)
Here, again, it feels as though the author is winking at us. The lecturer’s declaration that: “Being in play pushes us to the edge of our skin” doubles as an affirmation of this volume’s restless energy and its dazzling, ludic virtuosity. One of his students, having observed that his lectures have a story-like quality, proposes to collate them as literature: “If the text behaves like a story I’ll submit it to a magazine.” Touché. - Houman Barekat  https://www.irishtimes.com/culture/books/david-hayden-s-exquisitely-weird-short-story-collection-1.3209211

Darker With The Lights On, by David Hayden, is a collection of twenty short stories written in captivating, modernist prose. The language is lyrical, in places magical, the plot progression often surreal. There is a dreamlike quality to many of the tales which explore loneliness and reactions to lived experience. The agitation in the telling adds intensity to even the mundane.
The collection opens with Egress, narrated by a man sharing his observations after he steps off a ledge outside his office, high above street level. Whatever his consciousness may be travelling in has not yet hit the ground after several years.
In Hay an engineer is called to solve a problem in a mine being flooded by workers’ tears. His solution turns into a capitalist triumph, for which I constructed my own interpretation. The continuing presence of the giant haystack added to the deviance of this tale.
There follow several stories exploring disconnection: a man coming to terms with the woman in his life leaving by selling their belongings; a house where each physical object is a memory, although it is not clear whose; a man buried in sand as the tide comes in while others dance on the beach; a dinner party where nobody mentions the presence of a charred corpse ceremonially laid on the table.
A number of the tales take enjoyable events and inject them with a quiet malignance. In others there is sudden violence, barely acknowledged in plot progression.
An Apple In The Library has a customer borrowing the eponymous fruit which he consumes and then returns, his hunger sated. At face value this could be a simple metaphor for books, but I consider it unlikely this is all the author intended. In reading prose of such perspicacity I wonder how clever I am expected to be.
Much is left for the reader to ponder; the opacity can be disquieting and sometimes weird. Morbidity and the tarnishing of innocence since childhood is ruminated, although it is not a depressing book.
Dark themes may pervade but attention is drawn by the stunning imagery. Whatever my considerations on each story, I appreciated the author’s weaving of words.
This anthology would, I suspect, offer further insights on repeated readings. It is challenging, vital and eloquent; as unsettling as it is intriguing. - Jackie Law   https://neverimitate.wordpress.com/2017/07/14/book-review-darker-with-the-lights-on/

Our Research Notes series invites authors to describe their process for a recent book, with “research” defined as broadly as they like. This week, David Hayden writes about Darker With Lights On
Labels: David Hayden