Shaun Usher - Lists of Note is a constantly surprising A-Z of what makes us human. In its pages you'll find 125 lists with facsimiles or illustrations. Usher has trawled the world's archives to produce a rich visual anthology that stretches from ancient times to present day 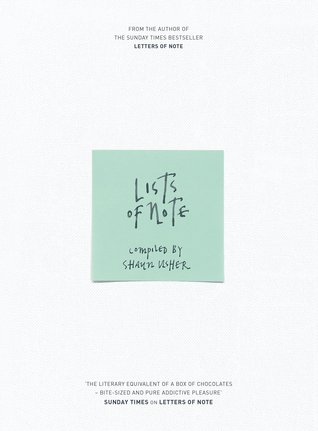 
Humans have been making lists for even longer than they've been writing letters. They are the shorthand for what really matters to us: our hopes and aspirations; likes and dislikes; rules for living and loving; records of our memories and reminders of the things we want to do before we die. Just as he did with Letters of Note, Shaun Usher has trawled the world's archives to produce a rich visual anthology that stretches from ancient times to present day. From a to-do list of Leonardo da Vinci's to Charles Darwin on the pros and cons of marriage or Julia Child's list of possible titles for what would later become an American cooking bible, Lists of Note is a constantly surprising A-Z of what makes us human. In its pages you'll find 125 lists with facsimiles or illustrations, including:
1. A shopping list written by two 9th-century Tibetan monks
2. A handwritten list of the BFG's favourite words by Roald Dahl
3. The 19 year-old Isaac Newton's list of the 57 sins he'd already committed
4. Galileo's list of parts needed to build his telescope
5. Einstein's punitive list of conditions imposed on his first wife
6. 29-year-old Marilyn Monroe's inspirational set of New Year's resolutions
7. Martin Luther King's advice for black people starting to use buses
8. Johnny Cash's list of 'things to do today'
9. Michelangelo's illustrated shopping list
10. Advice for 'chick rockers' by Chrissie Hynde
And many, many more...


They can be the only way to get through the working day, essential for the supermarket run or a way to rank the best books of the year. Lists might sound prosaic, but the manner by which they order every part of our lives makes their authors intriguing, too. As Shaun Usher says in this swift follow-up to his equally engrossing Letters of Note, a world without lists would be a chaotic existence, a “world full of things, muddled and overflowing, without a sense of purpose or collective identity”.Of course, some lists are more interesting than others. Your list of new year’s resolutions might be fairly predictable, but Marilyn Monroe’s concluded with the achingly sad “try to enjoy myself when I can – I’ll be miserable enough as it is”. And while there is an inevitable emphasis on celebrity in Lists of Note - Kurt Cobain’s wishlist for the Smells Like Teen Spirit video is as revealing as Roald Dahl’s dictionary of new vocabulary (gobblefunk) for The BFG – Usher succeeds in teasing out normality in the 125 he picks. Kurt Vonnegut’s faux marriage contract from 1947, when his wife was pregnant with their first child, has a brilliant henpecked weariness about it: “I will hang up my clothes and put my shoes in the closet when I am not wearing them.” Johnny Cash’s “Things to Do Today” has “Kiss June” swiftly followed by “Not kiss anyone else”.
Cash’s is the very first list, and within the next few pages all human life becomes apparent. There’s a ledger of George Washington’s slaves, Benjamin Franklin’s Drinker’s Dictionary (from “addled” to “very weary”), a shopping list by a 10th-century Tibetan monk (“one skin of wolf-hide for blankets”) and a list of suspects from JFK’s secretary, Evelyn Lincoln, written just hours after the president’s assassination: Lyndon B Johnson ranks just above the Ku Klux Klan.
An undertaking such as this is by its nature slightly repetitive: the mechanics of the editorial process become a bit too obvious in one sitting. But dipping into it, with Usher’s interesting notes and asides an amiable companion, is fascinating. One to put on your, ahem, Christmas list. - Ben East https://www.theguardian.com/books/2014/oct/12/shaun-usher-lists-of-note-review-providing-sense-of-purpose 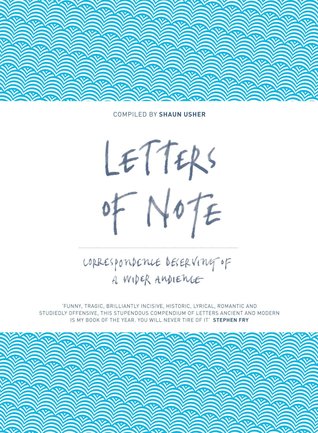 
This spectacular collection of more than 125 letters offers a never-before-seen glimpse of the events and people of history—the brightest and best, the most notorious, and the endearingly everyday. Entries include a transcript of the letter; a short contextual introduction; and, in 100 cases, a captivating facsimile of the letter itself. The artfulness of Shaun Usher's eclectic arrangement creates a reading experience rich in discovery. Mordant, hilarious, poignant, enlightening—surprise rewards each turn of the page. Colorfully illustrated with photographs, portraits, and relevant artworks, this handsome hardcover is a visual treat too, making Letters of Note an utterly distinctive gift, and an instant classic.


"While some might argue that the art of correspondence died with the advent of the internet, it was Letters of Note-a popular website sharing correspondence across history and spheres-that paved the way for the exceptional hardcover of the same name. The book's introduction aptly describes itself as "a museum of letters" that are as addictive as they are enlightening; featuring letters from Ernest Hemingway, Fidel Castro, Nick Cave, Elvis and more than a few world leaders.

London-based author Shaun Usher compiled the collection of over 125 letters over the course of four years and the subjects span both private and public theatrics. A letter from Elvis Presley to President Nixon is written in-flight on American Airlines stationary, in which Presley expresses his patriotism and requests to be made a Federal Agent, "just so long as it is kept very private." Each of the letters is accompanied with a contextual note from Usher that only serves to add to the fascination and potential rabbit hole of additional research readers might find themselves falling into.


"Funny, tragic, brilliantly incisive, historic, lyrical, romantic and studiedly offensive, this stupendous compendium of letters ancient and modern is my book of the year. You will never tire of it." – STEPHEN FRY

"Letters of Note is quite literally the most enjoyable volume it is possible to imagine. Every page is a marvel."
– THE SPECTATOR

"The literary equivalent of a box of chocolates — bite-sized and pure addictive pleasure."
– THE SUNDAY TIMES' BEST BOOKS OF 2013

"There have been many collections of letters before this one, and no doubt there will be many to follow. But it is hard to see how Letters Of Note could ever be surpassed."
– MAIL ON SUNDAY

"...Usher’s compilation is hard to beat."
– THE SCOTSMAN

"...deserves to be this Christmas' runaway bestseller."
– HARPER'S BAZAAR

"...a book that entire afternoons will be lost in for years to come."
– THE LIST

"It's a big, beautiful object. It is also wonderful to read."
– DAVID HEBBLETHWAITE

From Virginia Woolf's heart-breaking suicide letter, to Queen Elizabeth II's recipe for drop scones sent to President Eisenhower; from the first recorded use of the expression 'OMG' in a letter to Winston Churchill, to Gandhi's appeal for calm to Hitler; and from Iggy Pop's beautiful letter of advice to a troubled young fan, to Leonardo da Vinci's remarkable job application letter, Letters of Note is a celebration of the power of written correspondence which captures the humour, seriousness, sadness and brilliance that make up all of our lives.

The photos above are of the book's trade edition in the UK; more can be seen here.

Zelda Fitzgerald, Iggy Pop, Fidel Castro, Leonardo da Vinci, Bill Hicks, Anaïs Nin, Fyodor Dostoevsky, Amelia Earhart, Charles Darwin, Roald Dahl, Albert Einstein, Elvis Presley, Dorothy Parker, John F. Kennedy, Groucho Marx, Charles Dickens, Katharine Hepburn, Kurt Vonnegut, Mick Jagger, Steve Martin, Emily Dickinson and many more.
From art to music, politics, history, civil rights and drawing on just about every human emotion, it's easy to get lost in the 342-page tome. Each letter tells its own stories and it is easy to find oneself interested in new subjects. Perhaps the book's greatest virtue (and that of correspondence itself) is its ability to inject individual humanity into historical events and time periods. One highlight is a letter from a free slave to his former master, kindly rejecting an offer of a job while inquiring about the family and describing his new life. These true stories-whether they're between household names or persons unknown-reflect the great importance of interpersonal communication and the beauty of long-form written conversation." - Cool Hunting

"While a good portion of history happened out in the open, allowing it to be preserved in the history books for everyone to read for generations, still more happened in the private correspondence of people who mattered. In Letters of Note: An Eclectic Collection of Correspondence Deserving of a Wider Audience (brought to you by the creator of the blog by the same name) you'll read letters spanning across centuries, from influential political leaders, authors, actors, murderers, and more. Each one lends a unique insight into the major events of the time, whether they're wars, cultural shifts, key moments, or important discoveries. This epistolary compilation contains over 300 letters, detailing the personal thoughts of everyone from Jack the Ripper to Kurt Vonnegut." - Uncrate

"Someone should write a love letter to a new book called Letters of Note. It's a splendid collection of all kinds of correspondence through the ages: Elvis Presley fans writing to the president, children making suggestions to famous cartoonists, a scientist's poignant love letter to his late wife." - A Way With Words

"Reading through them is addictive, like dipping into a bag of variously tempting assorted candies, knowing that the next one will always bring surprise and pleasure. " - The New Yorker

"It's the kind of book you'll go back to again and again, and find something new every time. It's a celebration of what makes us human, and gathered together, they have a powerful effect. If nothing else, it will make you want to jot down a letter of your own." - Yakima Herald

"Every single epistle in Letters of Note is soul-stretching beyond measure."-Brain Pickings

"...an anthology of Shaun Usher's wonderful blog of the same name. It's well worth picking up."
Quartz 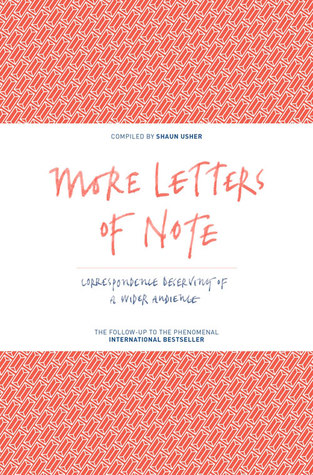