Mark Manning [Zodiac Mindwarp] - Funny, brutal and above all rigorously honest, the writer has explored parts of his psyche most people would rather believe didn't exist 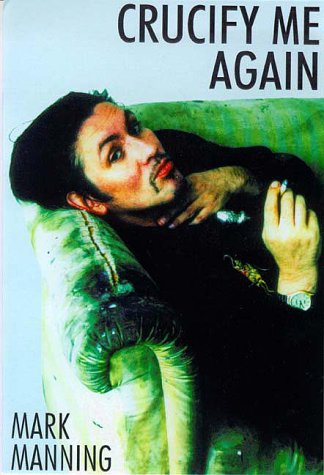 Deliberately ignoring the conventions of autobiography, Mark Manning, the artist formerly known as Zodiac Mindwarp, presents a vivid series of incidents from his life, illustrated with his own drawing and linocuts. Funny, brutal and above all rigorously honest, the writer has explored parts of his psyche most people would rather believe didn't exist. Documenting the rare moments of lucidity amongst the spiralling depravity of his ten years within the moral quagmire of bad sex, worse drugs and truly horrific rock and roll, it's a wonder he's here to spill the beans -- warts and sexually transmitted diseases and all -- at all.The bruised sensitivity of a poet raises these episodes above the squalidness of their surroundings. The mark of Manning's poetic genius elevates these finer feelings no matter what unfortunate cards he's been dealt.Manning's writing has been compared to William Burroughs for the profound satire that runs through the core of much of his work and Charles Bukowski for his lowlife poetry and subtle combination of tenderness and toughness.


On the morning of our interview Mark Manning, formerly known as Zodiac Mindwarp of 80s psychedelic biker band Zodiac Mindwarp and the Love Reaction, is being told off by his daughter. She's having a party to celebrate her 14th birthday, and her dad keeps nicking her vodka. "I'll just take a bit more for me guest," says Manning, submissively. "Give us a couple of fags and I'll be off."
"Give me that bottle!" she screams. We escape from the kitchen so that one of rock's most debauched monsters, famous for anthems like Wild Child and Tattooed Beat Messiah, can get a bit of peace. "I've been told to leave them at it until midnight," he explains. "It'll be me who has to clean up the puke tomorrow, though."
Now 41, Manning has long since given up rock'n'roll oblivion for a louche lifestyle of writing, drinking, and intermittently looking after his three kids and three ex-wives. With the KLF's Bill Drummond, he wrote Bad Wisdom, a fantastical account of the pair's attempts to place a statue of Elvis at the centre of the North Pole; and The Wild Highway, a travelogue about a trip along the Congo to battle-scarred Zaire.
Now he has struck out alone with Crucify Me Again, a collection of stories that document his delinquent schooldays in Armley, Yorkshire, years on the road and troubles with women, switching from nuggets of wisdom to sleaze to poetic vision within a couple of sentences. Boastful accounts of sexual conquests are interspersed with tales of breakdowns and broken hearts.
"The only prize I ever won was in religious education for reinterpreting parables," says Manning. "This book is made up of little parables. It's not fiction per se, but it's an interpretation of the truth, and the truth is never black and white."
Some of the tales of excess are hard to believe, such as the time the band's roadie Gimpo bought a van that had no brakes, and dealt with the problem by removing the ones from the van of a local primary school. "That's true," sighs Manning. Another story recounts how a girlfriend carved "pig" into his front door, threatened him by knifepoint until he slept with her, then attempted to get him beaten up by accusing him of rape. She turns out to be a well-known journalist.
"I didn't change the names, so the book's like Truman Capote's Answered Prayers, although being blanked by the Armley cognoscenti isn't quite as bad as being blanked by New York society. Your reality has changed after 10 or 15 years in a band, where you're encouraged to be a nutter. You invent your world and it's as good or as bad as you want it to be. I can see it in Liam Gallagher, he's got this look in his eyes that says he's on the same trip, although he doesn't know it yet."
Does he miss life on the road? "Absolutely. It's this humongous fishing trip, where there's free booze, free drugs, and girls who want you to shag 'em. But it takes its toll. You inevitably end up in smoky rooms, drinking tea from plastic cups, telling a group of idiots how long you've been an alcoholic."
It all went pear-shaped when Manning decided that Gimpo would make a good manager. "That was the beginning of the end. He's a lovely guy but he's not management material. But the band would never last - real rockers get filtered out because they're not interested in making money for the record company. It's sad because we were so good - although not in the later manifestations, when we all got fat."
One of the finest chapters from Crucify Me Again, "Germaine Greer's Bumhole and the Psychology of Wanking", compares Greer's diatribe against "tuggers" in her book The Whole Woman to "laughing at spastics", and describes how Greer's insults could never match the masturbator's self-disgust caused by a reflection on a television screen: "Pants around ankles, soggy tissue in trembling hand_ and you catch sight of your revolting self reflected on the blank screen."
As our interview ends, Manning's daughter bursts into the room holding a pile of "adult" magazines, and shouts: "What are these?" "It's my pornography," says Manning with a look of resignation. Such honesty is at the heart of Crucify Me Again: the tales of excess and bravado are imbued with a self-deprecating wit. It isn't the book of a man searching for respect, which might explain his daughter's manner. "She has no respect for me whatsoever," says Manning, "which is how I like it." - Will Hodgkinson   https://www.theguardian.com/books/2000/mar/07/artsfeatures.music