Alan Trotter - noir novel in wild collapse: violence jostles with boredom, thugs try to cut off an already-missing ear, and a mind is possessed by either time travel or insanity... Ceaselessly imaginative, drunk on cinematic and literary influence 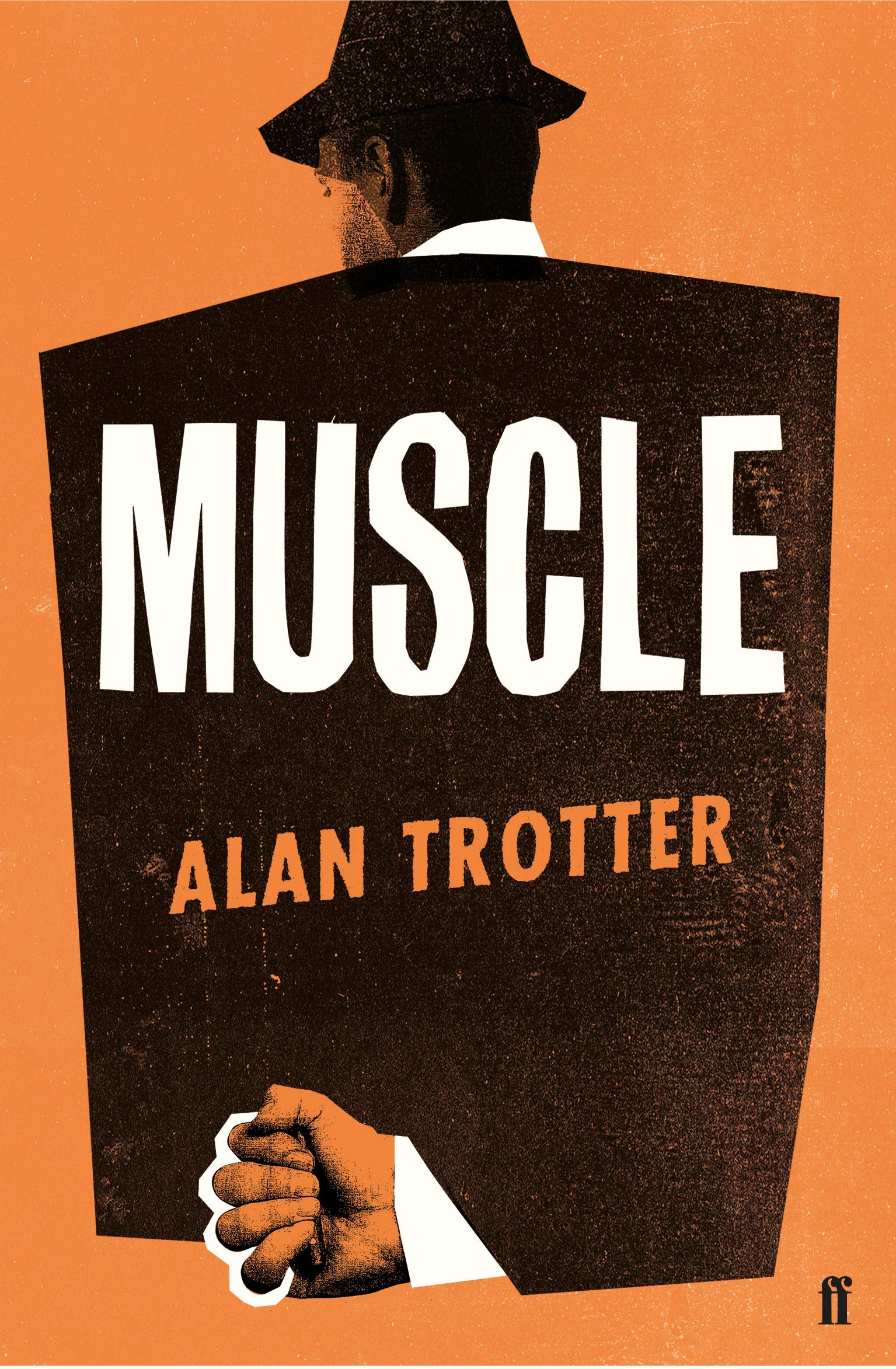 Box and _____ are a pair of toughs in a hard-boiled city ripped straight from the pulps—
they go where they’re told and break things when they get there. But something bigger than either of them is looming. It might be a mystery, a senseless maze of corpses or an inextricable fever dream, but no dumb muscle is getting out alive.
Muscle is a noir novel in wild collapse: violence jostles with boredom, thugs try to cut off an already-missing ear, and a mind is possessed by either time travel or insanity.... Ceaselessly imaginative, drunk on cinematic and literary influence, this is a blackly comic debut from a writer of singular style and invention.

A rollicking rollercoaster ride of modernist noir. It is unlike anything I've read before and bloody brilliant. A bold new voice tears down the walls between crime and sci-fi and produces this sumptuously written tale high on the effects of cinematic and literary influences. The story of two toughs on the mean streets who get lost down a vortex of guns, booze, pulp magazines and a looming truth that spins this story right on its head. What an ending! Please don't miss this one.
In a hard-boiled city of crooks, grifts and rackets lurk a pair of toughs: Box and _____. They're the kind of men capable of extracting apologies and reparations, of teaching you a chilling lesson. They seldom think twice, and ask very few questions.
Until one night over the poker table, they encounter a pulp writer with wild ideas and an unscrupulous private detective, leading them into what is either a classic mystery, a senseless maze of corpses, or an inextricable fever dream . . .
Drunk on cinematic and literary influence, Muscle is a slice of noir fiction in collapse, a ceaselessly imaginative story of violence, boredom and madness.

Publishing director Alex Bowler acquired world English rights on an exclusive offer from Chris Wellbelove at Aitken Alexander. The novel, which tells the story of two henchmen in a nameless noir city, was awarded the inaugural Sceptre Prize as a work-in-progress.
Bowler described the work as "a very clever, subversive piece of literature fitted inside something genre-shaped". He added: "It’s fast, dark, comic and satisfying, and the work of a major talent – a distinctive new voice with a distinctive imagination, who will put readers in mind of Burgess, Vonnegut and more recently Kevin Barry and Patrick de Witt."
Trotter lives in Edinburgh and is currently digital content editor at publisher Canongate. He said: "I couldn’t imagine a better home for Muscle than Granta. Already, in its pre-life, lots of people have kindly encouraged the book on its way, and that first Chris at Aitken Alexander and then Alex – and everyone at Granta – should have responded to it so enthusiastically, is sheer delight. I can’t wait."

Muscle unfolds like a series of Russian dolls, each more Beckettian, winding and wonderful than the one before. Compelling enough to read in one gulping go.’ - Daisy Johnson

Alan Trotter has a charmingly evasive attitude to biography: “Was born, grew taller and is yet to die,” he once wrote of himself. His website simply reads: “Hello. My name is Alan. I write fiction.” In conversation, everything leads back to writing. Wanting to be a writer, he says, predates his memory of anything else. When reading The BFG as a young child, he realised someone must have written it. And that was it.
Trotter has worked in publishing, as a copywriter and completed a PhD. But he sums all this up as having “done everything else” but write a book. An early draft of his debut novel, Muscle, was even part of his doctoral dissertation. He’s been working on Muscle for more than 10 years. It won the the Sceptre prize for a novel-in-progress. And this week it is published at last.
Muscle concerns Box and _____, the titular Muscle, as they go from job to job: roughing up who they are told to rough up and breaking what they are told to break. But we also see what they do between the breakings and roughings up: play cards, read sci-fi magazines, sleep in squalor. It’s a pulp novel with the seams exposed. Rather than tying up loose ends, Trotter tugs at them until the novel unravels. And with the unconventionally named _____, Muscle announces from the outset that this won’t be a comfortable genre retread.
“All of these things have to have a purpose behind them, have to be intrinsic to the work,” Trotter says of experimental techniques in literature. He’s worried people will find _____ “impossibly abrasive”. “Which is not why I did it!”, he adds. “It’s about making the book book-ish … making you aware of the physicality of the book as you hold it.”
He quotes the Canadian scholar and critic Hugh Kenner: “Parentheses, like commas, tell the voice what to do: an asterisk tells the voice it can do nothing.” _____ is, for Trotter, “this challenge to the voice. If you’re imagining how a sentence sounds, then it’s really hard to know how to contend with this character.” (Magnificently, Faber & Faber is considering a Muscle audiobook.) But _____’s name also serves a secondary purpose: “It felt as if it matched something of his character … and his situation in the world. Of being marginal.”
Hardboiled crime fiction has “something very robust in it”, Trotter says: “The mannerisms and the tone of it are specific and instantly recognisable, yet strangely transposable … And even when you begin to pick at it, or needle it, or amplify it and make it ridiculous, it still has appeal.” But it also carries within it “a toxic myth”: “There’s often one person who’s out of the system, who’s not playing by the rules, who is often more violent than the system would allow them to be or tolerate, but gets results. That’s an authoritarian impulse, as much as anything else. And I think that’s one of the reasons [hardboiled crime fiction] remains interesting to pick apart.”
Trotter wanted to pick away at the genre in a particular way, comparing this to an early work of 12 Years a Slave director Steve McQueen: his 1997 gallery piece Deadpan. In it, McQueen remakes a famous scene from Buster Keaton’s silent comedy Steamboat Bill Jr (in which the facade of a house collapses on Keaton). But McQueen repeats the scene, stoically, over and over, exposing the horror and violence that lay latent in Keaton’s original scene. Trotter is trying to do this with hardboiled crime fiction, “pulling backwards and away … until you reach the extreme edge of what remains.”
And what remains is, Trotter says, sad. “It becomes about boredom and unease and anxiety. And all these other things that if you’re at the heart of the action – you’re the detective kicking down doors and questioning people – that you don’t have time for.”
And that, too, is one of Muscle’s core conceits: the protagonist, Box, is not the detective kicking down doors but the hired goon. “His role in any other book would just be to be the dumb muscle: turn up for half a page, commit some act of violence and then be shuffled off again,” Trotter says. “Muscle is about sitting with that character and staying with him.” When Holcomb, a writer in Muscle, hires Box, he makes it clear what his role is: “That’s what I need, someone who can make me feel safer … This is not a situation where I need someone to crack a case by tracking down leads and figuring out all the angles.” Box’s problem is that he is too clever for his role as a goon; “any mind he might have is inconvenient for his existence”.
With its playful genre subversions, stories within stories and typographical quirks, Muscle might sound coldly academic. But all those conceits serve a sympathetic core: all of us exist within cultural and economic frameworks that frustrate, restrict and undermine us. We are often cast in roles we never wanted but can’t escape. And though we often come to accommodate, and forget, those frameworks, Muscle helps us to recognise the problems that are so often buried by the familiar. “I think people are very dismissive of work that is formally experimental,” Trotter says. “And often what they say is: ‘It’s just a gimmick.’ And it tends to be that it’s not. And they just haven’t chosen to think about it very deeply.” - James Reith 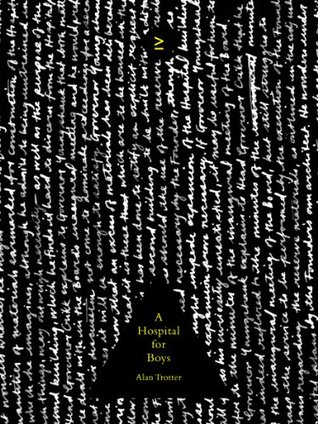 A Hospital for Boys

The Board of Governors meets again: these upstanding men have much to decide. There is the construction of the Hospital to manage, the hiring of reliable, discreet staff, the first intake of boys—and of course, the mysterious needs of the Founder to attend to...
For readers of M.R. James and House of Leaves, ‘A Hospital for Boys’ is a short story of creeping horror, of unspoken evil and the business of dark deeds. 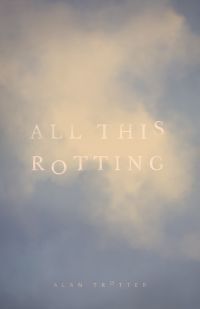