Maria Popova - An intricate tapestry in which the lives of various scientific and literary figures, are woven together through threads of connection across four centuries, linking one to another in unexpected chains through mutual friends, serendipity, meetings, letters and even lovers 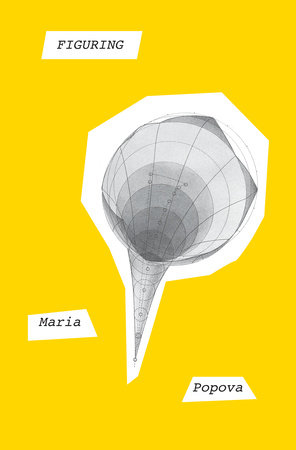 
Figuring explores the complexities of love and the human search for truth and meaning through the interconnected lives of several historical figures across four centuries—beginning with the astronomer Johannes Kepler, who discovered the laws of planetary motion, and ending with the marine biologist and author Rachel Carson, who catalyzed the environmental movement.
Stretching between these figures is a cast of artists, writers, and scientists—mostly women, mostly queer—whose public contribution have risen out of their unclassifiable and often heartbreaking private relationships to change the way we understand, experience, and appreciate the universe. Among them are the astronomer Maria Mitchell, who paved the way for women in science; the sculptor Harriet Hosmer, who did the same in art; the journalist and literary critic Margaret Fuller, who sparked the feminist movement; and the poet Emily Dickinson.
Emanating from these lives are larger questions about the measure of a good life and what it means to leave a lasting mark of betterment on an imperfect world: Are achievement and acclaim enough for happiness? Is genius? Is love? Weaving through the narrative is a set of peripheral figures—Ralph Waldo Emerson, Charles Darwin, Elizabeth Barrett Browning, Herman Melville, Frederick Douglass, Nathaniel Hawthorne, and Walt Whitman—and a tapestry of themes spanning music, feminism, the history of science, the rise and decline of religion, and how the intersection of astronomy, poetry, and Transcendentalist philosophy fomented the environmental movement.


“An intricate tapestry in which the lives of these women, and dozens of other scientific and literary figures, are woven together through threads of connection across four centuries, linking one to another in unexpected chains through mutual friends, serendipity, meetings, letters and even lovers. It is as if in her vast reading of source materials, especially original correspondence, she has fitted her brain with a set of filters to sift out references that might link any of her figures to any other. One is reminded of the 18th-century polymath Athanasius Kircher’s declaration: 'The world is bound by secret knots' ... In Figuring, we are thrust into a waltz of exquisitely honed minds — most of them belonging to women, many of them sexually queer — all insisting on living to their fulles. - Margaret Wertheim  The Washington Post

“Fascinating. . . Piecing together human truths and the remarkable details of these lives well-lived into an extraordinary mosaic of human existence, Figuring reveals our timeless interconnectedness, and the inevitable, although improbable, intersections of our lives in the vastness of the universe.”—BookTrib


The polymathic Popova, presiding genius behind brainpickings.org, looks at some of the forgotten heroes of science, art, and culture.
“There are infinitely many kinds of beautiful lives,” writes the author at the outset. She closes with the realization that while we individuals may die, the beauty of our lives and work, if meaningful, will endure: “What will survive of us are shoreless seeds and stardust." In between, she peppers thoughtful, lucid consideration of acts of the imagination with stories that, if ever aired before, are too little known. Who would have remembered that of all the details of the pioneering astronomer Johannes Kepler’s life, one was racing across Germany to come to the aid of his widowed mother, who had been charged with witchcraft? The incident ably frames Kepler’s breaking out of a world governed by superstition, “a world in which God is mightier than nature, the Devil realer and more omnipresent than gravity,” and into a radical, entirely different world governed by science. That world saw many revolutions and advances ahead of the general population, as when, in 1865, Vassar College appointed as its first professor of astronomy a woman, Maria Mitchell, who combined a brilliant command of science with a yearning for poetry. So it was with Rachel Carson, the great ecologist, whose love for a woman lasted across a life burdened with terrible illness, and Emily Dickinson, who might have been happier had her own love for a woman been realized. (As it was, Popova notes, the world was ready for Dickinson: A book of her poems published four years after her death sold 500 copies on the first day of publication.) Throughout her complex, consistently stimulating narrative, the author blends biography, cultural criticism, and journalism to forge elegant connections: Dickinson feeds in to Carson, who looks back to Mitchell, who looks forward to Popova herself, and with plenty of milestones along the way: Kepler, Goethe, Pauli, Henry James, Nathaniel Hawthorne….
A lyrical work of intellectual history, one that Popova’s many followers will await eagerly and that deserves to win her many more.—Kirkus Reviews


Fans of polymath Maria Popova’s popular website, Brain Pickings, will find themselves right at home in Figuring, her audacious new work of intellectual history that focuses on the lives of a coterie of brilliant women, some well-known and others less so, whose gifts in fields like astronomy, literature, ecology and art have helped shape our world.
Popova’s goal in this book is to tease out the “invisible connections—between ideas, between disciplines, between the denizens of a particular time and place.” Time and again her nimble mind and deep intellectual curiosity make those connections plausible and compelling, like the link that bonds 19th-century astronomer Maria Mitchell, who discovered a new comet in 1847, to Vera Rubin, who became the first woman permitted to use the Palomar Observatory in the 1960s.
For Popova, subjects like literary critic Margaret Fuller, poet Emily Dickinson and sculptor Harriet Hosmer are not disembodied intellects from the past. In describing the often frustrating courses of their personal—and especially romantic—lives, Popova exposes the tension between mundane human existence and the unrelenting demands of great science and art.
Though most of Popova’s icons flourished in the 19th century, she devotes considerable attention to a deeply sympathetic portrait of marine biologist and nature writer Rachel Carson, whose 1962 bestseller, Silent Spring, decried the indiscriminate use of pesticides and helped launch the modern environmental movement. Popova especially admires the way Carson “pioneered a new aesthetic of poetic science writing, inviting the human reader to consider Earth from the nonhuman perspective.”
Popova’s own mellifluous prose enhances her discussion of even the most arcane topics. She draws extensive quotations from primary sources, allowing her subjects to speak at length in their often eloquent, always fascinating voices. Figuring invites the reader to engage with complex ideas and challenging personalities, unearthing a wealth of material for further reflection along the way.
- https://bookpage.com/reviews/23600-maria-popova-figuring-nonfiction#.XG1UQWeGPIU


The ever-curious thinker behind the celebrated website Brain Pickings, Popova brings her hunger for facts and zeal for biography to this exhilarating and omnivorous inquiry into the lives of geniuses who “bridged the scientific and poetic.” At the start of this passionate and erudite pursuit of truth and beauty, Popova describes the strange sight of a small red leaf twirling in midair, a gravity-defying mystery solved when she discerns the fine-spun spider’s web holding it aloft. This image cues the reader to the structure of this many-threaded net connecting such barrier-breakers as the brilliant astronomer Maria Mitchell; radical writers Margaret Fuller, Emily Dickinson, and Rachel Carson; and the too-little-known sculptor Harriet Hosmer, most of them “women-loving women.” Popova presents uniquely discerning and strikingly candid interpretations of her subjects’ writings, private and published, and profiles their family, lovers, and peers, including Mary Somerville, Elizabeth Barrett Browning, Ada Lovelace, Ralph Waldo Emerson, George Sand, Frederick Douglass, Florence Nightingale, and Lise Meitner, among many others. Popova also chronicles sustaining same-sex relationships and the furors her subjects ignited, traces hidden strands of influence, and recalibrates the underappreciated impact women have had on culture and science. Writing with an ardor for language and musing on chance, affinity, and our fear of change, Popova constructs an intricate biographical cosmos that is intellectually scintillating, artistically wondrous, and deeply affecting.
— Donna Seaman    www.booklistonline.com/Figuring-Maria-Popova/pid=9712836


Maria Popova: why we need an antidoteto the culture of Google