Andrew Elias Colarusso - A hybrid chronicle stretching itself in every temporal direction, the charming magical realism of the Latin Boom (that forgot about Puerto Rico) is here warped by the uncanny spectacle of an emancipated colonial imaginary 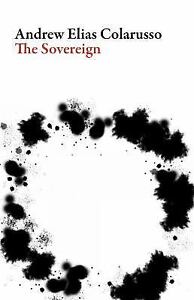 
13 October ―01 and inching toward midnight, Lieutenant Frances Villegas sits at a Steinway trying desperately to play Stravinsky’s Petrushka while the Colonel watches, wheezing from a wing chair. They are waiting on the enigmatic voice of the people, Adjutant General Arjún J. Joglar, due to arrive at any minute from Lares. Downstairs, Baldomero Richter, presiding over a captive body stripped bare of clothes, hair, genitals, and one ear, awaits an order to terminate. It is the eve of the Evangelist Insurrection and in a few hours the great city of XXX XXXX will go up in smoke, swallowed by the warm waters of the Caribbean. All of this to declare, finally, independence. 2 March 1917, the Jones-Shafroth Act determined that Puerto Ricans would forever thereafter be mainland American citizens. One hundred years later, The Sovereign marks the centennial anniversary of the Jones Act as both paean and polemic for the history of the island nation. A hybrid chronicle stretching itself in every temporal direction, the charming magical realism of the Latin Boom (that forgot about Puerto Rico) is here warped by the uncanny spectacle of an emancipated colonial imaginary. The Sovereign is an extended meditation on what it means to be ecstatically free―and the blood price a people must pay for that freedom.


Magical realism makes its way to Puerto Rico tinged with surrealism, post-realism, postmodernism, and even a little technospeak.
What happens when an ant ports a fungus into the colony, or when people merely trying to get to city from suburb have to put up with the anti-social barfing of an underage drunk on a train? “We are still sitting impatiently in the dark,” a harried rider remarks in a moment that might serve as the thesis for Colarusso’s overstuffed debut novel, mostly set in a Puerto Rico that does not entirely correspond to the real one. There, though an American territory whose residents are citizens, sort of, military drones ply the air like obscene birds of night, piloted from afar by career soldiers disconnected from the damage they do. One of whom, half borriqueño himself, is as much an artist of the joystick—“To watch Miguel play was something like watching a nervous portrait or a score to the music of his friend’s mind,” he recalls of a Game Boy mentor—as his rebel foe, a lieutenant named Frances Villegas, is an artist of the keyboard. “This is my song, Coronel. It brings me joy even if I don’t play well by your standards,” she tells her comandante, aware that a drone may interrupt the recital at any minute. For their part, the members of the Evangelist Insurrection, determined to shake off U.S. rule, are willing to do just about anything to gain the island’s freedom, scorched earth and all. But what might happen if they succeed? It’s one of many conditionals in a narrative that takes in brujeria, Santeria, négritude, and GlaxoSmithKline. Some of the manuscript seems an exercise in grad school style, some a dark here and playful there recasting of Caribbean history; Vonnegut would be at home in some passages, Junot Díaz in others, and if the story itself seems to fly off in different directions at times, the memorable characters, particularly the much-put-upon Malou, help keep things on track.
Readers with a taste for literary experimentalism and the Caribbean diaspora may take interest in Colarusso’s effort. - Kirkus Reviews


Look beyond Trump’s tweets and you will notice other messy disasters. For one, Puerto Rico is headed toward catastrophe. In June 2016, the US Congress approved the Puerto Rico Oversight, Management and Economic Stability Act (PROMESA), an attempt to control the finances, in the name of implementing austerity, in one of America’s remaining colonial territories. A devastating housing crisis, absurd energy costs, attacks on pension funds, decaying public education, and around $73 billion in public debt threaten the civilized survival of the island. Recently, Puerto Rico held a non-binding referendum. Despite statehood winning with 97% of the vote, a boycott by opposition parties limited turnout to only 23% of eligible voters.
Ironically, the referendum was held on the same day as the Puerto Rican Day parade in New York. The celebration became controversial when it chose to honor political prisoner and FALN leader Oscar Lopez Rivera, who after 35 years in federal prison had his sentence commuted by Barack Obama. In a parody of the chaos swirling around the island’s struggles, the parade’s corporate underwriters pulled out because of the public homage to Rivera.
Given the increased political turmoil, Andrew Elias Colarusso’s The Sovereign comes at the perfect time: it is a genre-bending, ambitious-to-the-max debut novel that revolves around a fictional uprising in Puerto Rico. At its best, this complex, experimental narrative succeeds at blending speculative fiction, magic realism, and techno-realism. Colarusso also succeeds in offering insightful commentary on the nuances of Puerto Rican culture in dense, often provocative prose:


Puerto Rican Logic. It was a gift economy within a communal system wrapped in bourgeois ideology. Xenia to a fault. Perhaps a manifestation of the deep and unacknowledged belief that God(s) or angels walked among them disguised as the wretched of the barrios.

Unfortunately, Colarusso’s yen to be avant-garde exudes, at times, a smarter-than-thou quality (grad school edition), a self-consciousness that ends up dissipating his story’s visceral power. The Sovereign is impressive, but it falters because it is so damned determined to be impressive.
Much of the novel is told through scenes of suspension: a New York City subway train is stalled in a dark tunnel, two sisters hide out in a restaurant after an explosion, rebel leaders in a decaying safe house wait for a drone strike to blow them to smithereens. To his credit, Colarusso manages to imbue the book’s pauses with urgency; sometimes a confrontation is conveyed through one continuous paragraph, or an episode’s claustrophobia is mimicked through syntactical disruption. The narrative’s shards are loosely tied together, mainly through a thematic clash between the idea of revolution and nation, both concepts partaking of an elemental lawlessness.
Colarusso rejects traditional character development; he never fully clarifies the relationships among his story’s figures and what they believe. Much of The Sovereign, like the nature and objectives of the revolution, remains enigmatic. The rebels call themselves the Evangelists, but to what extent religion plays a role in their ideology is obscure. In fact, exactly just what the revolution stands for is a mystery, even to its highest-ranking members. The Colonel, in a safe house with Lieutenant Frances Villegas, asks her who they are. After she replies with their movement’s name, the Colonel says “No. No. No. That’s what they call us. Who are we?” He goes onto explain that “We are the music makers, Lieutenant… We are the dreamers of the dreams.” Who they are seems to matter less than the fact that they exist, that they attempt to live “apart from the stale rhetoric of the so-called American creed. Apart from its veiled brutality and militarism… the pyrrhic romanticism of the empire.” The Colonel gives no other rationale than “Because it’s time,” and that God is on their side. This is revolution as motivated by both a radical rejection of the way things are, and a sense of destiny.
Much of The Sovereign plays with the discourses of postcolonialism, Afro-Caribbean history, colonialism (European and American), and Puerto Rican literature. Malou, who, as the mother of the revolution, could be seen as the story’s protagonist, prizes a library gifted to her by her Dutch-Spanish parents. The shelves are filled with precious “texts that would instill in her a sense of individuality and historical progress.” Among the volumes are those penned by advocates for Puerto Rican liberation, such as Eugenio Mario de Hostos and Bibiana Benitez. If nothing else, The Sovereign encourages readers to see the current conflicts over Puerto Rico’s identity as part of an evolving historical process. In an effort to evoke Puerto Rico’s cultural distinctiveness and its diaspora, Colarusso also brings up music and dance, providing analyses and commentary on Hector Lavoe, samba, and bachata. He also includes pop references to video game culture to draw parallels with U.S. militarism.
Many readers might find this encyclopedic quality to be a drawback, and Colarusso is sensitive to the charge. He even offers an apology in a note, confessing “those unbearably tedious parts of The Sovereign” could be seen as “a document of what wrongheaded loneliness a writer might mistakenly undertake.” The overstuffing is not a major drawback; what is downright bad is Colarusso’s bizarre descriptions of sexuality. For example: “Frances… could taste the scent of Sam’s pussy, radiating heat, bilirubinic excess.” Elsewhere, a woman fishes a man’s “coagulated pearl of hydrophobic semen” from a bath. The purpose for the clotted prose is easy to understand: a juxtaposition of the vulgar, the violent, and the erotic with the objective, the scientific, and the ordinary. But the result is repetitive and grotesque.
Does Colarusso see a future in national liberation? Who knows? The Evangelist’s revolution seems to end in a bitter betrayal, a defeat capped by a horrific battle between a man and a flame-throwing Predator drone. Apparently, the “pyrrhic romanticism” of America wins the day. Still, a strong sense of “a curse on both your houses” runs through The Sovereign. The book’s opening image is of an ant suffering from a cordyceps infection, a disease that can devastate an entire colony. For Colarusso, this is a universal predicament, because “madness in the animal kingdom is communicable.” Apply this notion to humanity, and ideologies become guises for insanity, competing irrational forces that refuse to understand one another. That attitude would seem to be a recipe for passivity — sit back and choose your brand of madness. Alas, given America’s unjust treatment of Puerto Rico, Colarusso’s spectacularly anarchistic vision might become depressingly predictive. - Lucas Spiro
artsfuse.org/161200/book-review-the-sovereign-anarchy-in-puerto-rico/


Times Six: On Black Life and the Horizon of Possibility